Who is setting India's forests on fire every year?

A few years more of forest fires can ensure that whatever small patches of forest are left will vanish.

It is the fire season again and, as has become usual in the past 30 years, fires are flaring up all over the country. In Uttarakhand, many fires have been reported from Garhwal and fewer from Kumaon. In Garhwal, the fires are clustered in certain areas, while large tracts are unburnt.

The difference between fires in 2016 and 2018 is that the state forest departments have been forced to accept the fact that Indian forest fires are not the result of spontaneous combustion, as they would like the public to believe, but are, in fact, set by humans, either knowingly or unknowingly. The myth of spontaneous combustion and natural combustion has been exploded once and for all. Fire in the mountain: Forest departments have been forced to accept the fact that fires are not the result of spontaneous combustion, but are set by humans, or unknowingly. [Credit: PTI file photo]

Two years ago, state forest departments began arresting and prosecuting people caught setting fire to forests. More than 250 people were caught during May and June, 2016 in Uttarakhand alone. It was, therefore, not at all surprising that 2017 saw a sharp drop in incidents of forest fires.

2018 has seen a resurgence of fires in certain pockets. The important point to be noted is “pockets”. Given that fires are set by humans, the concentration of fires around certain towns like Pauri in Uttarakhand strongly suggests that there is a person or persons in that area who has a vested interest in setting these fires. 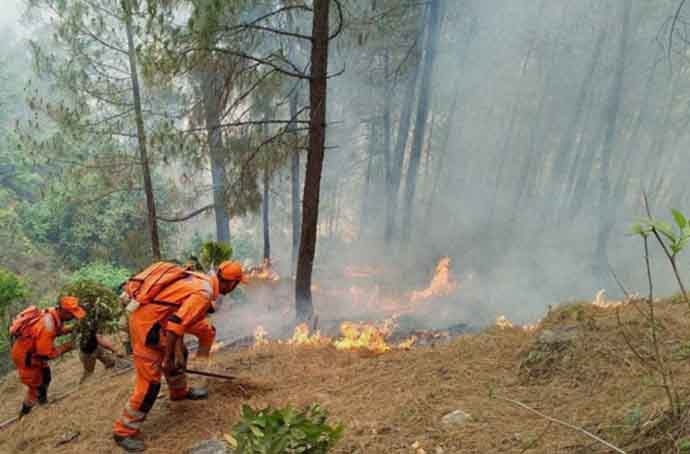 This is supported by the fact that identical forests of chir pine occur in other parts of Uttarakhand, which have faced identical climatic conditions, but have not succumbed to fire for the simple reason that no one set them on fire. The task of the governmental agencies is clear — they have to root out the arsonists and take stringent action against them.

Since the arsonists who set the forests around Pauri alight were not apprehended, other pockets are beginning to be set on fire, whether by the same person(s) or others inspired by the Pauri arsonists or as part of a larger design to wait until the last moment before the monsoon sets in to lay the forests waste.

It is surprising that sociologists have not been invited to profile and interview the arsonists arrested in 2016 and 2017, in order to gain an idea of their reasons for setting fire to forests. It is not too late to do so even now. For, the lists of people prosecuted will be known to the state forest department.

It has been suggested that a major reason for forest fires is the existence of plantations by the state forest departments, where little or no work is done in practise, although much money is spent on paper. The money finds its way into the pocket of political parties, corrupt politicians and officials, and the plantation is set on fire to destroy evidence of non-performance, while it also justifies the re-financing of plantations in the area the following year.

The amount of money spent on “planting forests” in Uttarakhand alone would cover the entire geographical area of the state, from the Tibetan border to the Gangetic plain, in over six layers of trees. The same may be said for other state forest departments, meaning that the Indian public has paid corrupt and incompetent officials enough money to cover the entire country in several layers of trees.

It is clearly time to stop the indescribably silly practice of "planting forests". As I have pointed out elsewhere, it is an oxymoron. State forest departments should be restricted to protecting forests, the money stolen in the name of planting forests should be used to increase field staff and improve their condition and that will simply take the rug out from under the coterie who set fire to forests to protect their ill-gotten gains.

The question arises, what sort of training are our forest department officials receiving if, prior to 2016, they could not figure out that forest fires were set and not natural? Until then, the demand by forest departments was for money to douse the fires, whereas they ought to have known perfectly well that the root of the matter lay in catching those persons setting fire. 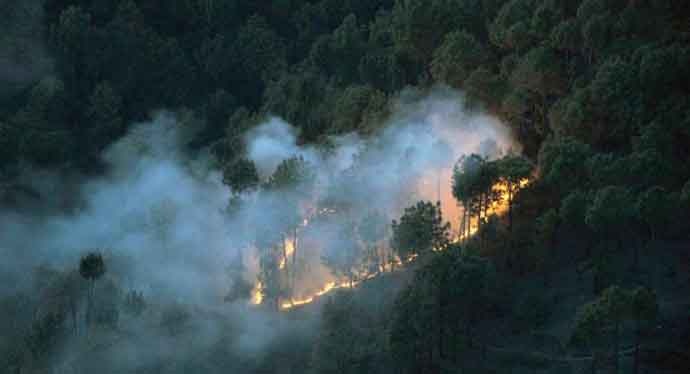 End of foliage: It is time now for forest departments to start serving the nation and justifying their salaries. [Credit: PTI file photo]

Now that they have been forced by the public and by facts to acknowledge that fires are set, they are still not putting in place measures to prevent such fires, such as profiling the arsonists caught, understanding reasons for setting fire, working in tandem with state intelligence agencies to understand the bigger picture, whether foreign powers are interested in the damage being caused to Indian forests.

It must be remembered that around 800 villages in Uttarakhand have been abandoned in the past eight years, since they have become unlivable. Water sources have dried up as a direct result of regular forest fires while agriculture is impossible since monkeys in the daytime and wild boar at night leave nothing in the fields.

The reason for increased depredation on the crops is that there is nothing left to eat in the forests because of regular fires. Herbivores like deer, hares and goral have been wiped out, while omnivores like pigs and monkeys moved to human settlements to eat. Due to the ban on hunting, there is no census of wild animals except the tiger, so there is no outcry when populations of herbivores drop, but there is an outcry when permission is given for subsistence farmers to kill wild boar raiding their fields.

It is, therefore, time now for forest departments to start serving the nation and justifying their salaries rather than looting public funds and destroying life support systems they are paid to protect. It is axiomatic that the corrupt are always fewer than the decent, just as carnivores are always fewer than herbivores. It is certainly time to weed out the corrupt officials and cliques, for political parties to stop demanding payments from forest departments, for the simple reason that with a few years more of forest fires, the cascade effect will ensure that whatever small patches of forest are left will vanish and leave our country a wasteland, as much of the lower Himalayan landscape has already become.

With our burgeoning population, the results of this will be catastrophic.

Also read: Why fires are continuing to ravage Uttarakhand forests

#Kumaon hills, #Garhwal, #Uttarakhand, #Forest fire
The views and opinions expressed in this article are those of the authors and do not necessarily reflect the official policy or position of DailyO.in or the India Today Group. The writers are solely responsible for any claims arising out of the contents of this article.