Unhindered mobility is a prerequisite for freedom. And it is freedom that empowers women. There are some who may not agree with it. But then no decision taken by any government can claim to have everyone on board with it.

Since India is a welfare state, it is incumbent upon the government to introduce measures that are in the best interest of the people. With exactly this goal in mind, the Delhi government on October 29 launched a scheme that allows women free rides on buses.

On the first day of the launch itself a large number of women availed free rides. Many more have joined since then. Most media reports and social media platforms are flooded with positive reactions from women who could travel in buses without having to pay a single penny. 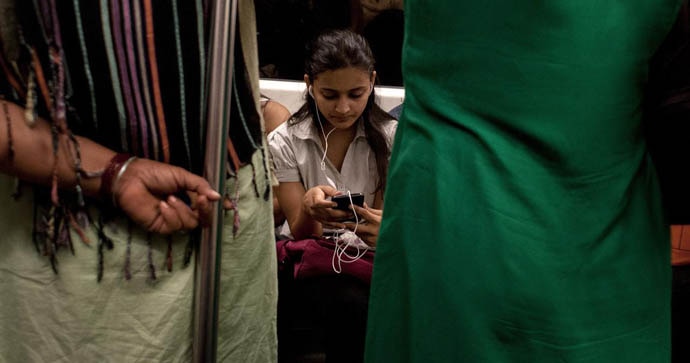 The Delhi government's bid to ensure free rides for women in buses and Metro trains is aimed at empowering them. (Photo: Reuters)

But the scheme also has its critics who say that the plan is antithetical to the idea of gender equality. They allege the scheme is an Aam Aadmi Party ploy to garner votes in the 2020 Delhi Assembly elections.

Every step a government takes is sure to have political implications, but the best way to judge such moves is to assess if it has contributed to the welfare of the people. In this case, many women are benefiting from the free rides.

To understand how this is happening, we must take a look at the female workforce of the capital city. Women form a sizeable portion of the workforce. A significant portion of the family income is spent on commuting. Easy access to free public transport would not only ensure greater participation of women in the workforce but also mean a substantial increase in their savings, thus benefiting entire families.

According to the National Sample Survey Organisation report and Periodic Labour Force Survey data (2017-18), the women Workforce Participation Rate (WPR) has always remained below the national average and recorded a significant decline of 10 per cent between 2011-12 and 2017-18.

It is important to note that India is going through an economic slowdown and women are more vulnerable to losing jobs during such crises because women are still not considered key breadwinners in a family.

According to Female Work and Labour Force Participation in India — A Meta-Study, occupational gendering occurs on both sides of the labour market. There is a strong belief that when there is job scarcity, men have more right to opportunities than women.

Women participate in both the skilled and unskilled sectors of the workforce, for which they mostly use public transport — primarily buses and Metro services. Ensuring free travel would help increase the participation of women in the workforce.

There are a number of research works which show that increasing the number of women in the workforce can also boost the GDP. According to a study conducted by two Harvard students, Rachel Levenson and Layla O'Kane — by raising female participation in the labour force, India's GDP could be increased by 27 per cent.

In the book Bridgital Nation: Solving Technology's People Problem, authors N Chandrasekaran and Roopa Purushothaman have discussed the same on the rise of GDP with more women participation. "In one stroke, their engagement could add $440 billion to India's GDP. Three-quarters of teenage girls in a national survey of over 70,000 girls said they wanted a career after graduating, and expressed specific career aspirations. In a national survey in 2012, when researchers surveyed women engaged in domestic duties, one in three said they would accept paid work if a good opportunity arose," the book notes.

In the West, various states have free travel schemes but there is no such scheme focused specifically on the women. In India too, no state has such a scheme in place. 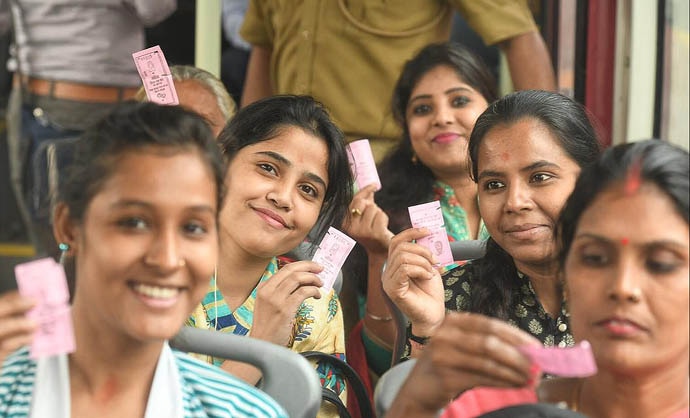 The free bus rides have brought smiles to many faces in the capital city. (Photo: Twitter)

The Delhi government is of the view that the scheme would address the issue of safety by giving women ready access to public transport, a form of travel that has been universally acknowledged as the safest mode of travel as numbers ensure greater safety, while not compromising on comfort.

The government believes that this step will also help female students by providing them with better educational opportunities. Educational institutions in Delhi are spread across the length and breadth of the NCR and often students have to travel vast distances. Many girls drop out as the cost of the commute turns prohibitive. Hence, free public transportation would help such students to continue their studies.

Considering how this move goes on to empower women, there is no question that the move is in the right direction. The positive responses coming from the women are a big thumbs up for the Delhi government. Women travelling in buses are either from the middle class or lower-middle classes. The scheme is thus helping a section that needs real help from the government. All parties should support it, keeping aside their political differences. If the scheme helps bring a smile to the faces of women in Delhi, then that is reason enough for all parties to come together.