Gagandeep Singh, cop who saved Muslim boy from lynching, is a hero. But we need to look beyond

It would be wonderful to imagine all Sikhs stand for justice but sadly that is not the case.

We need to go beyond Gagan:

Over the last day, sub-inspector Gagandeep Singh, Uttrakhand Police, has done much for the image of Sikhs and the police force. In the immense sharing of his photograph and deed – saving a man from a mob – I see a celebration of a certain kind of heroism which should be basic for all our security forces. The forces exist so that this is normal, routine work, not heroism.

Please note I completely commend Gagandeep and am proud for him but let us look beyond.

I wonder if the celebrations actually show up our lack of trust, our recognition of how broken the system is, that we now look at the uniform through the lens of religion - Sikh officer, Muslim victim, Hindu mob. It is indicative of our pathos as a society that we doubt the very forces we have created to protect us. If that is the case, then to me it is the end of the purpose of the uniform.

No doubt, our distrust comes from recent Thoothukudi, from Gadchiroli, Hashimpura, Bastar, Kashmir, Punjab, North-East... the list is endless.

In fact, we need to look at no list. For me, growing up in Punjab in the 1980s - when we didn't know who were more dangerous the police or the militants – even now the sight the khaki uniform makes my heart miss a beat. We need to look at how many women I know tell me a standard instruction they receive in life: if in a tight spot at an odd hour do not go alone to the police station. 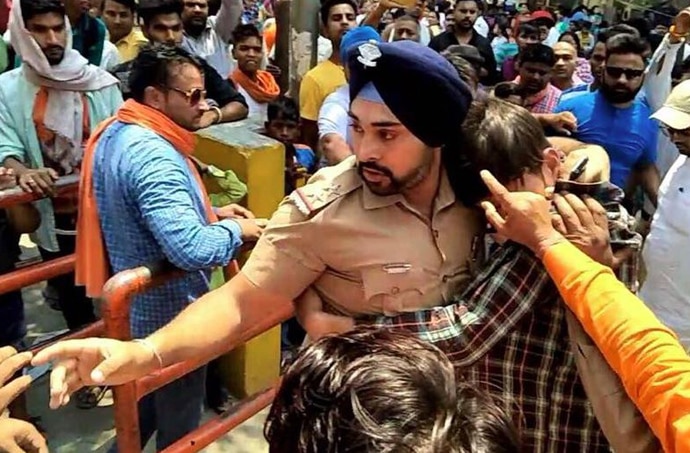 Given the rise of a particular type of politics of late which will somehow try to run down this officer, I am taking the opportunity to state that as far Sikhs go, their sense of duty and justice remains unparalleled both before and after the Indian nation-state was formed.

It would be wonderful to imagine all Sikhs stand for justice but sadly that is not the case. That is why perhaps while Gagan's story is travelling the English social media and news sites, I do not see it being reported enough in Punjabi. Look at Punjab now.

Look at its collapse of police system evidenced by the recent case – hushed up – where senior police officers were speaking in court against each other. Look at the police system's collapse that now Punjab chief minister has asked for central forces to guard its jails. There are a million such instances.

#Hate Crime, #Police, #Gagandeep singh
The views and opinions expressed in this article are those of the authors and do not necessarily reflect the official policy or position of DailyO.in or the India Today Group. The writers are solely responsible for any claims arising out of the contents of this article.