You're more than the sex you're born with: India is Trumping the USA at third gender equality

Donald Trump's govt is de-recognising transgender people and waging a war against biology. India is trying to do the opposite.

The news report that the Trump administration is planning to exclude transgender and non-binary people from its legal definition of gender has caused outrage not only in the USA, but across the world. The proposed definition would define 'sex' as 'male' or 'female' only, unchangeable, and determined by the genitals that a person is born with, according to a draft reviewed by the New York Times. Any dispute about one's sex would have to be clarified using genetic testing.

“Sex means a person's status as male or female based on immutable biological traits identifiable by or before birth. The sex listed on a person's birth certificate, as originally issued, shall constitute definitive proof of a person's sex unless rebutted by reliable genetic evidence,” the memo reportedly states.

The transgender community has been outraged — and rightly so. 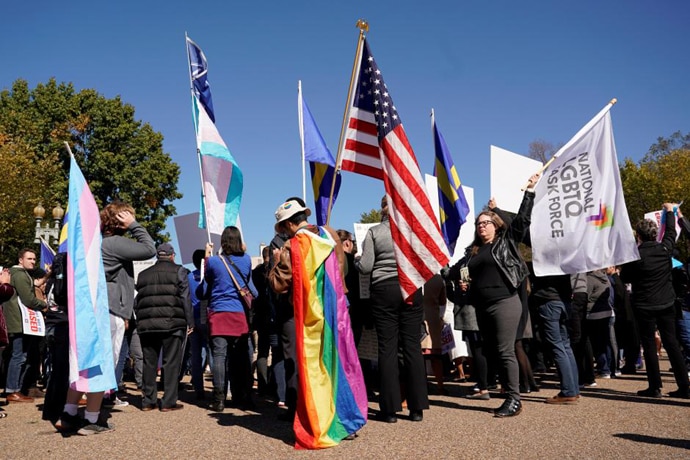 However, the Indian transgender rights activists now something to hold their heads high about. India has not only recognised 'transgender' legally, but has also provided transgender people the rights that have been denied to them for centuries.

“In India, transgender is legally recognised as a gender, with the option listed in most identity documents. Not just that, also in the National Legal Services Authority vs Union of India (NALSA) judgment by the Supreme Court directs the government to look at gender beyond the binary. If that was not enough, on September 6, the five bench Supreme Court unanimously passed the order on Article 377, making the law more inclusive for everyone, including homosexuals and transgenders for the first time since 1861. So, in that sense, we are progressing one step at a time — and American society is regressing ten steps backward for every one step we take ahead,” says transgender activist and trans woman Rosy. Back home meanwhile: Meera Sanghamitra, a member of the National Alliance for People’s Movements. (Photo: Twitter)

While lethal violence has hit the trans community in recent years in the United States, with over 100 transgender murders between 2013 and 2017, India has had a long history of encompassing the transgender or the hijra community in its fold.

Hijras have long been considered auspicious in India, as harbingers of fertility and fortune, and feature as revered demigods in Hindu mythology.

India boasts of many “firsts” in the transgender community.

While the US is hovering between allowing and preventing transgender people from joining the army based on gender-by-birth, India's Prithika Yashini is already the first transgender police person.

While Donald Trump's government revoked guidance to US public schools that allowed transgender students to use toilets matching their gender identity in 2017, India's first complete transgender couple — Aarav (a trans man) and Sukanyeah (a trans woman), were on the brink of tying the knot.

As recently as 12 days ago, Odisha's Meghna Sahoo became India's first transgender cab driver and got employed with Ola Cabs.

However, the struggle is far from over, says Meera Sanghamitra, a member of the National Alliance for People’s Movements and a trans woman. The United States or Donald Trump cannot be a benchmark to decide where India stands in terms of being progressive.

“We have our share of regressive leaders too. If in 2014, the NALSA judgement by the Supreme Court was hailed as a big leap towards progressiveness, it took the BJP government less than a year to question the ‘political’ and ‘practical’ ramifications of the judgment and move the top court. While the judgement gave transgenders the right to have a family and jobs, the government was arguing the identity and the need for the transgender people to have families. In some BJP-ruled states, there are cases of authorities violating the Supreme Court order and mandating a medical procedure to issue identity cards to the transgender people,” she points out.

Meera refuses to address the gender as “third” gender. “We are all for diversity of gender, not hierarchy in gender. If we are the third gender, who decides what the first and second genders are?” she asks.

Thus, while the battle may be won in the NALSA and Article 377 verdicts, the war is still on.

Transgender activists like Rosy argue for the need of quotas in educational institutions and for public appointments as a socially and educationally backward class, beside society accepting them as an integral part. Furthermore, we have been addressing the transgender community all along without sparing a thought for the intersex people that encompasses 1.7 per cent of people born with intersex traits – the same number of people born with red hair.

While the Trump administration is planning changes to federal civil rights laws and any confusion to be clarified through genetic testing, an intersex person's body would throw this Trumpian test for a loop — the naturally occurring genitalia of intersex people does not match the “correct” genetic code in the forced-binary paradigm. The fate of intersex people has been forgotten — yet again, in a rule where bigotry seeks to override biology.

So, we may be a step ahead of the Americans, but there are many more milestones to cross before we Indians can call ourselves a truly gender-inclusive country.

Also read: Why transgender community is struggling in spite of NALSA judgment

Post your comment
#Gender rights, #India, #Donald Trump, #Transgender
The views and opinions expressed in this article are those of the authors and do not necessarily reflect the official policy or position of DailyO.in or the India Today Group. The writers are solely responsible for any claims arising out of the contents of this article.