We will all breathe for George Floyd. Except Donald Trump and Mark Zuckerberg

Those of us who can breathe, belong to a connected world without digital boundaries. Some of us are in anguish; some of us are feeling powerless, fearful or angry.

I can’t breathe. These were George Floyd’s last words before Minneapolis law enforcement officers murdered him on May 25, 2020.

'I can’t breathe' must have been the last thought of every single human being who succumbed to Covid-19, the fatal pathogen that is currently sweeping across the world.

Those of us who can breathe, belong to a connected world without digital boundaries. Some of us are in anguish; some of us are feeling powerless, fearful or angry. Some of us took to the streets in protest. Among us are those who are indifferent to the plight of the many who have died, making them breathless. 'That was indeed horrible', but we must continue with our lives, be safe in our homes and watch from the safe distance of our couches.

Then there are those among us who deeply breathe in an air-filled with privilege, due to our race, religion, social and income status, as well as nationality. These people cherish the new world order of justice. They consider the death of Floyd collateral damage. 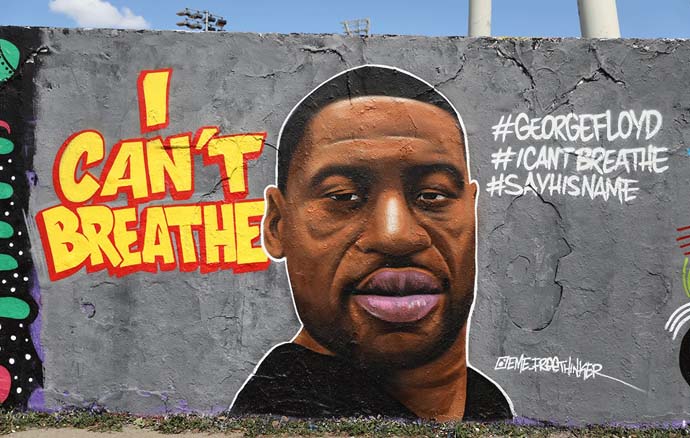 George Floyd’s last words were “I can’t breathe", before Minneapolis law enforcement officers murdered him on May 25, 2020. (Photo: Reuters)

Who benefitted from the death of George Floyd? Firstly, US President Trump.

A divided America is a political experiment of the conservatives in the US. Behind the inward-looking nationalist slogan of ‘Make America Great Again’, disruptions to the established socio-political structures and international relations wreaked havoc and gave rise to sharply divided opinions on what is right and wrong for America. This divided and chaotic America has been the fodder for electoral strategies of Trump.

Then there is a second winner. His name is Mark Zuckerberg. Zuckerberg owns 60 per cent of Facebook, one of the most profitable companies on Earth with a revenue of approximately USD 70 billion in 2019. Nearly a third of humanity is connected to Facebook’s platform – a total connected community of 2.5 billion. The largest being India, followed by the US, Indonesia, and Brazil. As I wrote earlier in an essay, these connected communities are unpaid data suppliers of Facebook. However, most of them are blindly misled and instead believe they are the customers of Facebook. Who benefitted from the death of George Floyd? Donald Trump and Mark Zuckerberg. (Photo: Reuters)

Data from the connected communities is the critical fuel of Facebook’s business engine, and Facebook's computer algorithms are designed to divide community opinions and thoughts to maximise the data supply to its platform. Facebook’s own recent internal business strategy documents concluded that “our algorithms exploit the human brain's attraction to divisiveness (by securing more data feeds into the platform)”. With more than 190 million connections in the USA and around 43 per cent of Americans dependent on Facebook for their daily newsfeed, every sharply divided day in America is Christmas for Mark Zuckerberg.

For Facebook, every death from the breathlessness of Covid-19 victims and the murder of George Floyd, are fodder for data fuel from a divided world. The connected world community is highly polarised on opinions and facts on the origin of the virus; its containment and prevention strategies prescribed by epidemiologists and scientists battling the pathogen, and the social cost versus economic costs of the ensuing lockdown.

Since coronavirus started killing human beings in the connected world in January 2020, and as most of the world businesses suffered from an economic lockdown, Facebook's share price hit an all-time high of USD 230.75 on May 27, 2020, delivering a market value of around USD 640 billion.

Facebook, built on the personal data of individuals, was launched in 2004. With its community of 2.5 billion people, Facebook through data harvesting has been able to feed data in the form of facts and alternate facts, news and fake news, truths and half-truths, pre and post-truth, propaganda, and blatant lies, whilst being unchallenged or regulated. Facebook was instrumental in developing the highly-polarised world of facts and alternate facts, truths, and alternate truths. This led to the rise of Trumpism in the US and culminated in the election of Trump as US President in 2016. For Facebook, every death from the breathlessness of Covid-19 victims and the murder of George Floyd, are fodder for data fuel from a divided world. (Photo: Reuters)

Last week, Zuckerberg said that “private companies (like Facebook) probably shouldn't be the arbiter of truth," and that social-media platforms especially "shouldn’t be in the position of doing that.”

Facebook posts or data feeds to its platforms on May 28, 2020, claimed the death of George Floyd was a "staged event." Truth is the antithesis to Facebook’s business model.

George, most of us know, you were made breathless and murdered. That is the truth.

We will be arbiters of truth. We will breathe for you.

#Mark Zuckerberg, #Donald Trump, #Facebook, #Georgefloyddeath
The views and opinions expressed in this article are those of the authors and do not necessarily reflect the official policy or position of DailyO.in or the India Today Group. The writers are solely responsible for any claims arising out of the contents of this article.