Because our garbage is greater than our glories: How the dump yard of Ghazipur will soon be taller than Taj Mahal

India's tallest garbage mountain, located in Delhi, will rise higher than the Taj Mahal by 2020. While this will make it the perfect symbol for the world's most polluted city, it is also a huge health hazard.

Delhi's Ghazipur dump has always inspired awe, fear and wonder, all at the same time, in the heart of the beholder.

And it is now set to earn a new accolade — India's tallest rubbish mountain in New Delhi is on course to rise higher than the Taj Mahal by next year, becoming a fetid symbol for what the UN considers the world's most polluted capital, say reports.

It is a common sight to see birds of prey hovering around over the towering dump yard that lies on the eastern fringe of Delhi, besides the stray cows, dogs and rats looking for scraps from the expanse of smoking filth. According to reports, East Delhi’s superintendent engineer Arun Kumar confirmed that the dump yard is already more than 65 metres (213 feet) high and takes up the area of more than 40 football pitches.

About 2,000 tonnes of garbage is dumped in the Ghazipur landfill yard every single day.

Rising by nearly 10 metres a year, with no end in sight to its foul-smelling growth, the mountain will be more than 75 metres tall by 2020 — taller than the Taj Mahal, which rests at 73 metres.

The Supreme Court said last year that red warning lights will soon have to be put on the dump — to alert passing jets.

Why is this scary?

The hazards that the Ghazipur site poses go beyond known threats of communicable diseases. 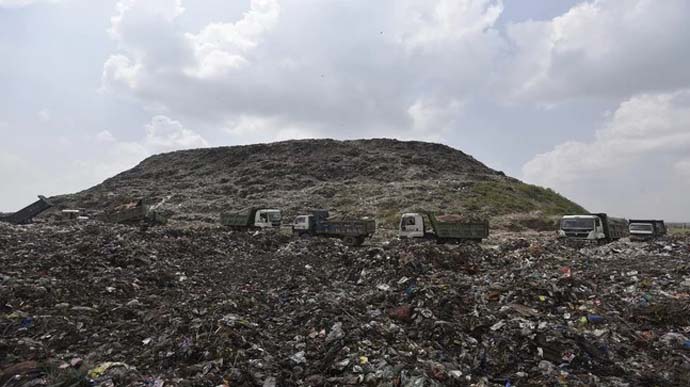 In 2018, a section of the garbage hill collapsed in the heavy rains, killing two people. As an emergency measure, dumping was banned after the deaths. However, the ban lasted for barely a week — the authorities could not find an alternative dump yard.

It is a regular sight for residents around the yard to spot fire outbreaks.

Fires, sparked by methane emanating from the dump, break out out very regularly and take days to extinguish. The most recent outbreak was on March 31, 2019, and the fire could not be extinguished for over 10 hours — engulfing surrounding areas in a thick, foul blanket of smoke. According to reports, the locals are at their wits' end to resolve the crisis that the yard presents. They say a plant that recycles waste into energy next to the dump increases their misery because the smoke it releases by burning trash is also poisonous. Local doctor Kumud Gupta said she sees about 70 people, including babies, each day mostly suffering from respiratory and stomach ailments caused by polluted air.

A recent study said the dump was a health risk for people living within five kilometres (three miles), including for cancer.

Shambhavi Shukla, senior researcher at the Center for Science and Environment in New Delhi, reportedly says that methane belching from the garbage can become even more deadly when mixed into the atmosphere. Leachate, a black toxic liquid, oozes from the dump into a local canal. It also seeps into the ground, mixing with groundwater, making it toxic.

Why is Ghazipur so toxic?

Ghazipur was opened in 1984 and reached its capacity in 2002 — when it should have been closed. But the city’s detritus kept on arriving each day in hundreds of trucks. The authorities claim they do not have an alternative site for dumping waste.

India does not have strong laws on waste segregation and recycling — making dump yards like Ghazipur a feature that cannot be deleted from the topography. However, by the time such laws are written, passed and enforced, it just might be too late. It already is, for Ghazipur.

It is our responsibility to ensure that the waste we generate is reduced. Segregation at source is not something we need laws to enforce on us. The waste needs to be segregated and recycled. It takes only a tiny bit of effort to save us all from what seems to be a certain doomsday when we could all be confronting before us a hundred more Ghazipurs.

Also read: How you can save the planet with these 5 easy steps: Just reduce plastic use