What if the future kids cooked a half-plate bheja fry of a politician and be disappointed that it tastes like dung?

What came first? Gopal Bhargava has been struggling with the chicken and egg problem since he was a child. He has finally reached the conclusion that both are equally bad and Madhya Pradesh will soon have a zombie apocalypse because he's nuts, which is pure vegetarian as he, a pure vegetarian, eats them.

Gopal Bhargava was a minister in the last government in Madhya Pradesh. Since Kamal Nath edged the kamal out of the throne in Madhya Pradesh, he has been sitting in the opposition. So he opposes. At the moment, he is opposing eggs in school mid-day meals. Gopal Bhargava says children who eat eggs grow up to be cannibals. 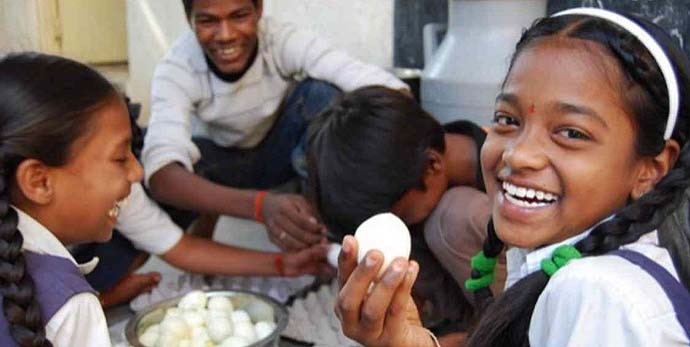 The only man-eaters Madhya Pradesh has known are tigers, who have long stopped even coming near humans because humans happen to be the biggest threat to their survival. Humans, now on top of the food chain, will soon turn on their own kind as they grow up eating eggs.

Gopal Bhargava thinks cannibalism is bad and a human should not eat a human but just beat them with a bat, not the flying mammal but the cricket bat. He gifted these bats to women to beat up their husbands if they drink. The bats had "equipment to thrash your husband" written on them.

He not only tolerates violence but also encourages it if it's all in the family. What he cannot tolerate is people drinking. Because drinking may involve chakhna (bites) and chicken is often offered. That makes a man eater man-eater who takes bites out of another man eater who might just be eating chicken.

The problem with government schools offering eggs in mid-day meals is that by the time the kids go to college, they would be having school kids for breakfast and by lunch time, they would want a full-grown man to eat.

Bhargava doesn't specify whether the egg-eating man-eaters would cook them but since Madhya Pradesh is cultured and sanskari, we can safely assume the cannibals will be into cooking.

That's disgusting and scary. What if they cooked a half-plate bheja fry of a politician and be disappointed that it tastes like dung? Because how does the future cannibal know that there is just dung in there? It's not that you can tell by looking at his face.

#Sanatan sanskriti, #Eggs, #Mid-day meal, #Gopal bhargava
The views and opinions expressed in this article are those of the authors and do not necessarily reflect the official policy or position of DailyO.in or the India Today Group. The writers are solely responsible for any claims arising out of the contents of this article.