Donald Trump, the world’s biggest bully, needs to work on his anger management. And then go to a good old-fashioned movie with a friend.

Donald Trump may not rank anywhere near the top of the charts of best US Presidents, but he certainly seems to lead by a mile when it comes to being the biggest bully on troll-infested Twitter. The White House resident went after teenage climate change activist Greta Thunberg yet again. And she hit right back, and won, yet again.

So ridiculous. Greta must work on her Anger Management problem, then go to a good old fashioned movie with a friend! Chill Greta, Chill! https://t.co/M8ZtS8okzE

If Trump thought he could get away with his snarkiness, he couldn’t have been more mistaken. Greta gave back as good as she got. Her Twitter bio now reads: A teenager working on her anger management problem. Currently chilling and watching a good old-fashioned movie with a friend. 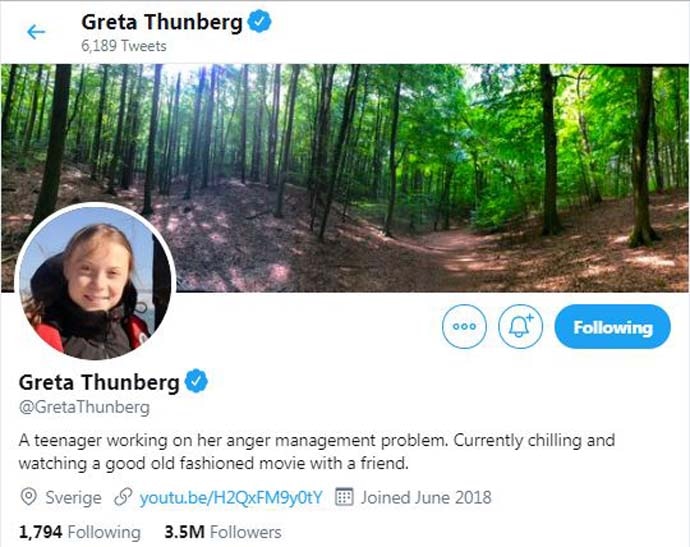 Ironically, the husband of Melania Trump seems to have forgotten about his wife’s #BeBest initiative and her crusade against cyber-bullying. Keeping in line with her initiative, Melania had, just last week, slammed Stanford Law School Professor Pamela Karlan, who is also a witness in the impeachment inquiry against Donald Trump, for a comment made about Barron Trump — Donald and Melania Trump's 13-year-old son.

A minor child deserves privacy and should be kept out of politics. Pamela Karlan, you should be ashamed of your very angry and obviously biased public pandering, and using a child to do it.

But then, the rules of the game can be different when the President is playing bully. We suggest the FLOTUS takes a look at her husband’s track record.

Thankfully, Twitterati got Greta’s back.

Melania, we agree. Children are off limits. Tell your husband to #bebest and go enroll himself in anger management instead of attacking such a brilliant and courageous teenager fighting for climate change. @GretaThunberg we got your back!

Thank you for bringing the hypocrisy of #FLOTUS' #BeBest campaign to our attention. Her husband's bullying Ms. Thunberg, a child, seems to have gone unnoticed by her "team", and by extension, by Melania herself. https://t.co/0lvNM9tw9F

.@GretaThunberg, don’t let anyone dim your light. Like the girls I’ve met in Vietnam and all over the world, you have so much to offer us all. Ignore the doubters and know that millions of people are cheering you on.

However, Greta is not the only one Trump has bullied in the recent past.

Bull(y) in a china shop

In an interview on CBS This Morning in July this year, Rep. Rashida Tlaib had said President Trump is the biggest bully she's ever had to deal with in her lifetime. This came after the President tweeted this about the four non-white Democratic congresswomen:

....and viciously telling the people of the United States, the greatest and most powerful Nation on earth, how our government is to be run. Why don’t they go back and help fix the totally broken and crime infested places from which they came. Then come back and show us how....

It has been widely reported how his 30-minute phone call with his Ukrainian counterpart Volodymyr Zelensky on July 25 was nothing short of bullying. He drilled down on the Ukrainian President’s weakness (of needing American support) and didn’t relent. It eventually led to Trump's impeachment inquiry. According to American journalist Michael D'Antonio, who authored Donald Trump’s biography Never Enough: Donald Trump and The Pursuit of Success, bullying has always been central to Trump’s character. “In the summer of his thirteenth year, his exasperated parents notified him that he was being sent away to military school because he was too unruly. Cast out of the family home, he did become more disciplined, but he also became the man who would tell me he enjoyed ‘all types of fights, even physical’,” D'Antonio writes.

If we were to list all the instances of Trump’s bullying behaviour, this will become a monotonously long read. A simple Google search should satiate your curiosity on the other people he has bullied.

A year ago, on December 11, 2018, Trump clashed on live television with Senate Minority Leader Chuck Schumer over funding for the Mexico border wall. The stunning public spat ended with Trump declaring he’d be proud to shut down the government to get what he wants. (High time someone told him that is not how a democracy works.)

Not surprisingly, Schumer accused him of having a “temper tantrum”.

One could say that the impeachment inquiry got under his skin. But then, this is not the only instance. Again, the instances are way too many to list out. So much so, that #TrumpMeltdown is a returning trend on Twitter.

Political observers and mental health experts have repeatedly pointed out that Trump’s serious temper issues are worrying. That, coupled with a brittle sense of worth that even a perceived slight could lead to him exploding, often pushes him into denial of his wrongdoings. It also leads to Trump often charging out at the world, which he feels is out there to get him.

So who needs the anger management? Greta Thunberg because of her 'stinkeye' to Trump? Or Trump because of, well, being Trump?

A good old-fashioned movie with a friend is sure to help the US President too. Chill Donald, Chill!

Post your comment
#Anger Management, #Time magazine, #Donaldtrump, #Gretathunberg
The views and opinions expressed in this article are those of the authors and do not necessarily reflect the official policy or position of DailyO.in or the India Today Group. The writers are solely responsible for any claims arising out of the contents of this article.