How a jet-setter yogi went wrong on Guru Nanak

In a video circulating on social media, an English-speaking yoga practitioner from the South has reportedly shared an anecdote about his visit to a Sikh martial event.

In the purported footage, he also spoke highly of some of the most visibly striking features of gurdwaras – volunteerism (sewa), dedication and devotion of the faithful and cleanliness.

The yogi's generous appreciation of the Sikh religious life, as heard in the 2019 copyrighted clip, is itself commendable. As an ordinary Sikh, I'd like to thank him for that.

But then there are also discernible mistakes in his overall narrative about the Gurus, which I heard over and over again.

The elderly master is a no-nonsense figure, with an international following.

So, it becomes reasonable to set his erroneous perspective right.

His theories could have stemmed not from a thorough study of the Sikh faith and writings but from hearsay, propaganda or vague assumptions. Every Sikh grows up seeing the depiction of Guru Nanak asleep in Mecca. (Photo: Facebook)

Guru Nanak not 'just a guru'

In his sermon, the yoga specialist chose to describe Guru Nanak as "just a guru, who gathered a large group of people around him".

I'd like to correct the yogi here, assuming he spoke out of ignorance and not in bad faith.

Let him be aware, in the first place, that Guru Nanak was not "just a guru, who gathered a large group of people around him".

Guru Nanak broke social ranks based on faith, caste, gender or race. He envisioned God as a formless force running through the cosmos and beyond.

"I see no stranger, I see no enemy. I look upon all with goodwill," is how this vision is phrased in Sri Guru Granth Sahib.

Gathering a large group of people around is a trademark of modern-day babas feeding off on CSR funds – not Guru Nanak.

Guru Nanak shared his vision with humanity. He took to the road selflessly.

Accompanied by a companion, Mardana, the Guru travelled from Punjab to Sri Lanka to Afghanistan and to Baghdad and Mecca in the West.

Some Hindutva advocates still propound that no dialogue is possible with Abrahamic religions. Guru Nanak turned that orthodox thinking inside out back then. Every Sikh grows up seeing the artists' depiction of the Guru asleep in Mecca, his feet facing the holy Kaaba.

When an angry cleric drags him into reverse position, the Kaaba turns too in imagery symbolising Guru Nanak's vision that no place is unhallowed.

Now followed a debate as documented by Bhai Gurdas, a marvellous poet, scholar and the first interpreter of the sacred Sikh writings.

This ballad centres around a Q&A that Muslim religious leaders in Mecca had with an adult Nanak, referred to as Baba Nanak.

They ask him what still is a key question locking civilisations in perpetual conflict: "Which of them is greater or truer - the Muslims or the Hindus (Indian/non-Abrahamic)?" they ask, as quoted by Bhai Gurdas.

Guru Nanak's response to them, in the hub of Islam, was radically egalitarian.

"None," he replied. "Both sulk, caught as they are in meaningless rituals and not in meaningful deeds."

In the video, the yoga master also appeared to have made light of Guru Nanak's universal message.

"He (Guru Nanak) generally taught, his teaching is universal. He initiated people into certain types of meditation and devotional practices," the yogi said.

I suggest the gentleman study how Guru Nanak's universal vision brought about an unprecedented revolution in a region divided fiercely by caste and religion.

The yoga expert can also research if he likes, how the Guru opposed tyranny when other so-called spiritual leaders at the time had coiled into their shells.

When Babur invaded the subcontinent, the yogis and pirs refused to give spiritual leadership to the victims.

"As the divine word comes to me, so do I express it, O Lalo. Babur, the invader from Kabul, has brought in a wedding party of sin, demanding our lands in gift, O Lalo.

"Modesty and righteousness have vanished. Falsehood struts around like a leader, O Lalo," the Guru wrote. 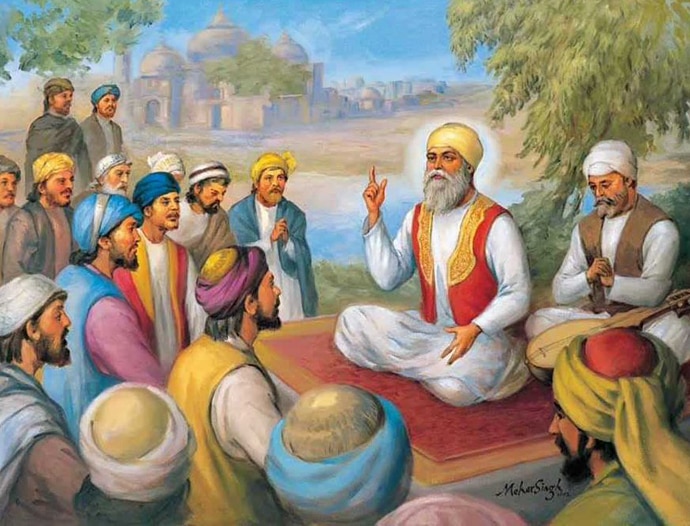 The yoga master also seems to have undermined the continuity of Guru Nanak's mission.

"Then, after him (Guru Nanak), another five gurus came," he said, casually.

Let me explain what it is in the realm of Sikh spirituality.

The jyot, or the light, is the vision Guru Nanak carried. The jugat, or the method, lay in its journey through all his successors up to Guru Gobind Singh.

The same light of wisdom now resides as an eternal flame in Sri Guru Granth Sahib.

My thank-you note earlier to the yogi aside, some leading experts on Sikh religion, philosophy and history aren't really thrilled at the yogi's praise of Sikh volunteerism.

That's precisely because his characterisation of Sikhi in totality pockmarked the essence of the faith.

In response to the yogi's discourse, Harinder Singh, a widely-respected thinker and a senior fellow at the US-based Sikh Research Institute, tweeted about the jyot-jugat concept.

Let me refer to how this spiritual approach is elucidated in Sri Guru Granth Sahib:

So, the spiritual light and the method to imbibe it go together in Sikhi.

In Sikh beliefs, Guru Nanak himself is seen as the embodiment of this light that travels through all the nine Guru persons that followed. The oneness of Guru Nanak, successors

I wonder whether the yogi studied how Sikhi unfolded with the advent of Guru Nanak and after.

If he had he wouldn't have issued a generic statement that "then, after him (Guru Nanak), another five gurus came".

The yogi should have examined how the second Guru Nanak – who was installed as Guru Angad – renounced deity worship after he came in contact with Guru Nanak at Sri Kartarpur Sahib (now in Pakistan).

I am not sure if the yogi is aware how Guru Angad institutionalised the Gurmukhi script.

I wonder whether the yogi read how the third Guru Nanak, Guru Amardas, prohibited the sati and purdah (veil) practices involving women.

I wonder whether the five-star master knew how Guru Amardas, in line with Guru Nanak's egalitarian principles, made emperor Akbar sit on the floor with the commoners to partake of langar, the community meals.

I wonder whether the yogi had any clue who established the town of Amritsar, then called Chak Ramdas or Ramdas Pur. It was Guru Ramdas, the fourth Guru Nanak, who set it up and had an amrit sarovar, or a holy pool, dug up where now stands Sri Darbar Sahib, the Golden Temple to the world outside.

"In today’s terms, Guru Arjan Sahib prepared a treasure-anthology which is something more than scripture, manifesto and constitution combined. He unveiled the legacy-heritage in the centre with open access to all at Sri Amritsar Jio," explains the Sikh Research Institute on its website.

All that stood in a perfect alignment with Guru Nanak's worldview.

The then priestly and ruling classes perceived Guru Arjan as a threat. He was executed savagely under the orders of emperor Jahangir.

Should he choose to, the yogi may revise his casual perception about the first four of Guru Nanak's successors.

I suggest he also devote some time to reading Sri Guru Granth Sahib.

If he does, I am sure he would be able to discover how Guru Nanak's light is distilled into great truths and philosophies in an ever-widening stream of inspiration.

The yogi may look at the diverse selection of the writings contained in Sri Guru Granth Sahib.

The most sacred compilation of the Sikh faith carries the writings not only of six of the ten Guru Nanaks but also of spiritual figures from across cultures and languages of the region.

Gurmukhi is the script in which Sri Guru Granth Sahib is written but the content is not dependent on any single language or the geographical boundaries of Punjab.

The collective writings offer a solution to tensions, conflicts and anxieties of human life. You need no deluxe wellness retreat for insights. 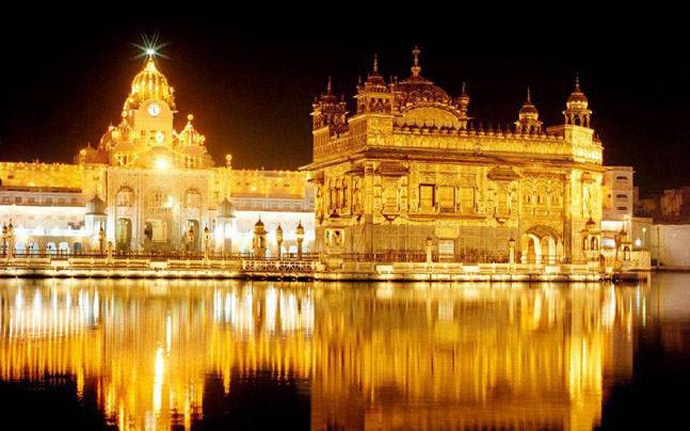 Gurmukhi is the script in which Sri Guru Granth Sahib is written but the content is not dependent on any single language or the geographical boundaries of Punjab. (Photo: PTI)

From Guru Nanak to Khalsa

Let the yogi be aware that the twin light-method track of succession gave rise to Sikhi's temporal and spiritual heritage, called miri-piri, institutionalised by Guru Hargobind, the sixth Guru Nanak.

Guru Gobind Singh built the order of the Khalsa on the same foundations.

In his speech though, the modern yogi tried to project Guru Gobind Singh differently.

"He (Guru Gobind Singh) asked every man, every Sikh man, should be soldier in his own right," the yoga master said.

But Guru Gobind Singh's Khalsa is not solely soldierly. His Khalsa amalgamates the sant-sipahi and miri-piri characteristics of both spirituality and soldierly courage — the cornerstone of Guru Nanak's thoughts.

The Gurus collectively rejected rituals, Hindu and Islamic. They stood for humanity without bias towards or against any faith. They found reclusive practices futile.

"Some worshipped the stones and placed them on their heads. Some hung the phallus (lingam) from their neck.

"Some saw God in the South and some bowed before the West. Some worshipped idols and some the dead.

Influencers like this yoga practitioner are expected to read up before they speak up on evolution of religions and their philosophies.

Else, they risk coming across as ideological spin doctors, more so in today's Hindu-versus-Muslim climate.

Also read: How a baba-leader nexus is wiping out Sikh heritage

#Spirituality, #Sikhism, #Jaggi Vasudev, #Yogi
The views and opinions expressed in this article are those of the authors and do not necessarily reflect the official policy or position of DailyO.in or the India Today Group. The writers are solely responsible for any claims arising out of the contents of this article.