Why can't poor patients from villages make appointments at specialised hospitals like AIIMS though post offices or banks?

A friend forced me to ponder upon something very basic — why can't poor patients from villages make appointments at specialised hospitals like AIIMS though post offices or banks?

It's true AIIMS and many other government hospitals do issue online appointments, but since not everyone in the villages or tier-three towns are comfortable with internet and computers (or have the access), the suggestion of getting someone at the nearest bank branch or post office to do the same for them, does hold some merit.

That set me into thinking if we could expand this framework of the already-existing online registration portal (ORS) further to make it more meaningful for the healthcare system of India.

A model which combines the strengths of the core banking system with that of the IRCTC website would perfectly fit the bill. Digital doctor: Patients can book appointments online for the same day against cancellations and no-shows at the All India Institute of Medical Sciences under its ‘Tatkal’ scheme launched in 2015.

Let us explore how. In the core banking system, each bank account has a unique signature on the bank's centralised network and an account holder can make transactions from his account to another sitting anywhere in the country using the internet or through any branch of the bank. The changes get uplinked to the central server and then reflect in the person’s account in a short time.

Similarly, the IRCTC website keeps track of the available berths in trains in real time and makes it possible for anyone with access to internet to book a seat for themselves.

Similar to the account a person holds in his or her bank on the core banking network, an account could be created in the national e-health portal (or whatever other name the government comes up with), which could be a one-stop repository for all healthcare records, investigation results, prescriptions etc, issued to the person. This account could be linked to the person’s biometric details and Aadhaar card. The information could then be accessed by any healthcare provider (initially in the government setup and then the private practitioners too, if they come on-board), with a point-of-care access interface like the one currently used to authenticate Aadhaar-based transactions. This could help in multiple ways:

1) During an emergency, if a person requires urgent health interventions, his fingerprints alone could tell the rescuers everything they need to know — from blood group to drug allergies to any other co-morbidities such as diabetes, hypertension etc.

2) Patients won't need to carry bulky folders with previous reports and prescriptions. All that they would need to do is give their fingerprints and authenticate the access request by means of OTP sent to mobiles and their health records would be up for the next treating doctor to see. In a set-up like AIIMS, where many of the patients are not so well-educated, poor and come from far and beyond, they often forget to carry the required health records for subsequent visits, only to be scolded by the doctors and having to repeat the investigations (which can be really expensive at times), or go back home to fetch them.

3) Say goodbye to the guessing game that the patients and pharmacists face due to the poor handwriting of doctors. If restaurants can use tablets to record a customer’s order, why can’t the doctor take the case records and give digital prescriptions instead of writing down pages and pages, mostly in illegible handwriting? It might seem a slower modality at first, but with a built-in software of medical lingo which would auto-predict words like the one’s on smartphones along with proper training, it would indeed be quicker than the handwritten mode in use at present. 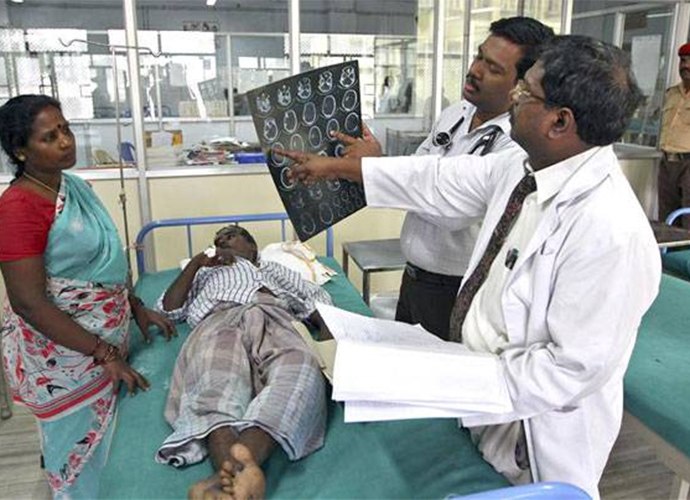 Health check: Medical research hinges upon the careful collection and analyses of data which is at times very expensive.

4) Moreover, if the software can standardise the terminologies used, it could lead to better inter-practitioner understanding (for example, at present the same abbreviation PND, means Paroxysmal Nocturnal Dyspnoea for a cardiologist and Post Nasal Drip for an ENT surgeon; mistaking one for the other could be hilarious, if not catastrophic).

If some amount of indigenisation can be brought in, prescriptions and instructions can be digitally translated to the language a patient is comfortable with, making the healthcare experience all the more patient-centric.

6) If the physician treating a patient for the first time were to know how the patient had responded in the past to different treatment modalities, it could enable him or her to zero down on a course more likely to prove beneficial for the individual patient. This could be made possible by the same unique record repository for a person from birth to death.

7) The Ayushman Bharat scheme promises to revolutionise healthcare for the poorer sections of the society. If this e-health record system with Aadhaar could be integrated with the Ayushman Bharat framework, the recipients of the scheme would not need to preserve the records of the benefits availed in a particular year by themselves. The records of the entire family would be on the portal, and the next time someone from the family needs to avail any benefit, the doctor looking after the case can simply check the records of the five family members in the past year to find out how much of the Rs 5 lakh limit still remains.

8) The previous point also holds true for the privately insured individuals who at present need to submit health records and hospital bills among other things to get claims approved by their insurer.

9) The more indirect benefit of this gigantic repository of data would be the immense potential of being used to carry out research and innovations.

Medical research hinges upon the careful collection and analyses of data which is at times very expensive. If a repository of health data of a billion-plus individuals would be available for research purpose (after suitable data sanitisation to protect the privacy of patients), it could be a major boost to medical research and development in India.

At present for most diseases, our management principles are based on the data gathered by studies in the western world. With research that could follow from the availability of data of this scale, India can assess how its people respond to different interventions and come up with its own guidelines best suited for the population.

Now, coming to the second part — the IRCTC model. The same e-health portal model would need to be integrated with the existing healthcare system from the level of the primary health centres or PHCs (at village level), community health centres or CHCs (at block level), district hospitals and finally the tertiary care centres (big hospitals in cities and medical colleges). How about digital prescription: We can say goodbye to the guessing game that the patients and pharmacists face due to the poor handwriting of doctors.

The patient would first visit the nearest PHC and then in case his or her problem cannot be managed at the PHC level, the doctor at the PHC itself should have access to the real-time appointment availability across all CHCs to book the most feasible appointment for the patient at the next level of the healthcare pyramid.

Instead of writing a referral on a piece of paper, the doctor at the PHC can directly attach the same to the CHC appointment requisition form he or she would fill up. So that when the patient arrives at the CHC on the designated day and meets the next doctor, the latter can directly access the patient’s health records, the workup done by the PHC doctor and the reason for referral.

Also, if the dispatch of ambulances and other emergency transport modalities can be linked to the system, as soon as the doctor files the requisition, the nearest available ambulance can be rushed to the PHC. This model would save time, money, efforts (of both the patient and healthcare professionals) and most importantly lives.

There, of course, would be concerns regarding privacy of data, especially regarding tests like HIV and other stigma-associated diseases. This could be solved by allowing the patients to have secret vault facility within the e-health record system wherein they can deposit such sensitive records which cannot be accessed by anyone without the patient’s permission. The nuances would become clearer as and when large-scale deliberations are held on the topic.

The government came out with "Electronic Health Records Standards for India" in 2016. If the above suggestions could be considered for deliberation by the stakeholders at various levels, with the coming of the Digital India revolution and the ambitious Ayushman Bharat Scheme, we could hope for a healthier India as well.

#Ayushman bharat scheme, #AIIMS, #Digital India, #Healthcare
The views and opinions expressed in this article are those of the authors and do not necessarily reflect the official policy or position of DailyO.in or the India Today Group. The writers are solely responsible for any claims arising out of the contents of this article.

Author is a MBBS student at AIIMS New Delhi.