The hijack that wasn't: How hijack scares on flights have become a new normal

From a prankster to a selfie-crazy dude to a jeweler — why does social media validation come far ahead of basic air safety for these unruly passengers?

It has now become a popular social media joke that millennials don’t know they can fly in and out of a city, without posting a message on social media.

In the post-9/11 time, this sounds funny — until this social media frenzy takes recourse to ‘hijack scares’, delaying flights for hours.

But are we sacred by such news? Are we amused? No. We just nonchalantly turn the newspaper page over.

In such a ‘normal’ occurrence, a 21-year-old male passenger of a Kolkata-Mumbai Jet Airways plane was recently taken into custody after he covered his face with a handkerchief to pose as a ‘terrorist’ — and send out that photo on WhatsApp.

According to reports, he had a cheesy caption ready as well: “Terrorist on flight. I destroy women’s hearts.”

Clearly, the person was quite sure about his targets. Just the medium and the method to reach those were ghastly.

We don’t know whom to blame more — social media addiction, too much frivolousness, or Bollywood movies for teaching us that a handkerchief is enough to become a terrorist!

Such hijack scares in fact abound. No, a plane hijack is not a joke. (Reuters photo of the Indian Airlines Kandahar hijack, 1999)

Earlier this month, a pilot of a Kandahar-bound Ariana Afghan Airlines plane pressed the hijack button by mistake, as it was taking off from Delhi. The name of the destination was enough to bring back memories of the 1999 hijack of Kathmandu-Delhi Indian Airlines Flight 814. The hijackers had forced the aircraft to then Taliban-controlled Kandahar in an attempt to pressure the Indian government to release Islamist militants held in India. The hostage crisis went on for seven days.

In the following years, of course, the trauma of 9/11 changed air travel the world over. With painful memories of the hijacked American flights, global travellers submitted to intensive security checks and even managed their language on board better.

But now — 17 years later — ‘hijack’ is apparently a joke in India, thanks to our callousness, indifference to our surroundings and our constant need of social media validation.

In July this year, a passenger aboard an IndiGo airlines Chandigarh-Srinagar flight was detained for shouting out aloud that passengers should not untie their seat belts as the flight had been hijacked.

In 2017, Kerala television personality Clince Varghese sent the crew of a Kochi-Mumbai Jet Airways into a tizzy when he was uploading a selfie-video on his social media account, with a voiceover that he was going to ‘hijack’ the plane with ‘happy vibes’. Reports said that the security staff heard his voiceover while he was recording the video and mistook ‘happy vibe’ as ‘happy bomb’.

If you think that such flights of fancy are confined to young persons or first-time fliers, you are totally wrong. 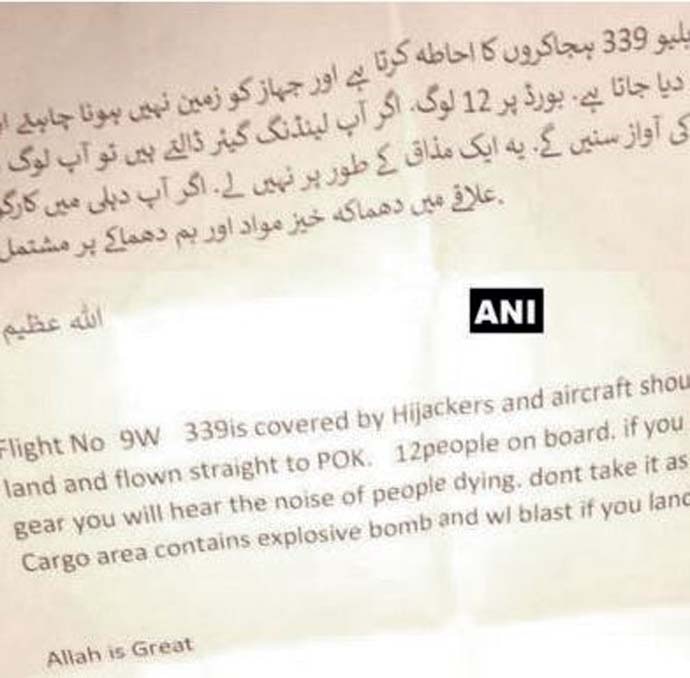 Last year, Birju Kishore Salla, a frequent flier on Jet Airways, reportedly kept a note in the toilet of a Mumbai-Delhi Jet Airways flight, claiming that the plane was ‘covered by hijackers’.

“Flight No 9W 339 is covered by hijackers and aircraft should not be land and flown straight to PoK. 12 people on board. If you put landing gear, you will hear the noise of people dying. don’t take it as a joke. Cargo area contains explosive bomb and wl blast if you land Delhi. Allah is great (sic).”

After the note was discovered, the plane had to make an emergency landing in Ahmedabad. According to reports, Salla was a jewellery businessman and was travelling on a business class ticket. It's time we curbed our flights of fancy. (Photo: Reuters)

There was also an incident of a flier calling up the Mumbai cops and saying, “There is a hijack-like situation”. It was not a prank. It was just an expression of disgust as the flight concerned was delayed by three hours and the best solution, according to that gentleman, was to report it to the police, with a tint of vivid imagination though.

In 2015, a Hyderabad man was arrested after he threatened to hijack the plane as an airhostess rejected his request to take a selfie together.

The rules are not lax. Birju Kishore Salla was put on a no-fly list. In 2012, Jitender Kumar Mohla, a chartered accountant, was sentenced to life imprisonment by a New Delhi court for triggering a hijack scare in 2009. In a Goa-Delhi Indigo flight, he had claimed that he was one of the accused in the 1999 Kandahar hijack, and was carrying infected needles and a gun.

We really can't afford to act so foolish on air.

Or, anywhere else, for that matter.

Also Read: This is how cheap air tickets are cheating passengers

#Selfie, #Social Media, #Hijack scare, #Aviation safety
The views and opinions expressed in this article are those of the authors and do not necessarily reflect the official policy or position of DailyO.in or the India Today Group. The writers are solely responsible for any claims arising out of the contents of this article.