Hima Das controversy: Why we are so quick to judge and question the dedication of our sportspersons

In Assam, these days, the two names on everybody's lips are that of Hima aaru (and) Rima. Notwithstanding the coincidence of the two rhyming first names with a common surname, athlete Hima Das and filmmaker Rima Das have captured everyone's imagination, won the heart of every single Assamese.

Flipping through the pages of the local newspapers, or overhearing roadside conversations, intellectual deliberations in cultural evenings, or heated arguments in shady watering holes, you might well imagine it's a national pastime. The two young achievers and how they have made the state proud. Hima with her World Junior Athletics Championships gold and Rima with her Village Rockstars (and India's official entry to Oscars).

But like all idol-fan relationships, this adulation too seems to be fading. At least in Hima's case. 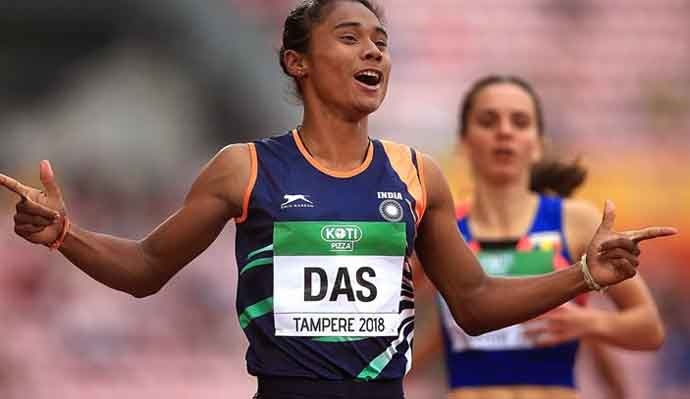 The media — after relentlessly covering Hima and her paddy field-to-podium story — has suddenly started questioning her dedication. Soon, news spread that the Athletics Federation of India (AFI) was "unhappy" with the sprinter for not joining the national camp on October 10.

#HimaDas is avoiding training. AFI unhappy. Got in touch with Assam Govt. to persuade her to cut her 45 day break and return to camp.  Her coach Galinia is also back. Assam Govt persuading her to go back on Oct. 18. Olympic dream is in jeopardy.

Assam Hima  Das in the pile of controversy. AFI made its displeasure over Hima’s commitment to the sport. Hima not yet reported at coaching camp organized by AFI from October 10 in Patiala. This could land Hima in troubles such as ban from the AFI to participate in Tokyo Olympics pic.twitter.com/8MZmenB1M4

Her coach told me now- she is busy with the new flat she has purchased, shall go soon. ( Govt of Assam bought her air ticket for Oct 18).

On social media, a bevy of lifestyle coaches sprang up, some saying "success has gone to her head", some advising her with anecdotes of how hubris destroys careers, some others blaming too many felicitations distracting her from doing what is her 'dharma'.

It's true that Hima's rise —  after winning the gold medal at the World Junior Athletics Championships and three more medals, including a gold at the Asian Games — has been meteoric. From job and endorsement offers, cash prizes, awards (including the prestigious Arjuna Award 2018) to appearing on the cover of GQ magazine, Hima has seen it all in these few months.

The hurt that the latest controversy has caused to Hima's fans is perhaps going to take some time to heal even though the AFI has denied reports claiming that the athletics federation has raised its concerns about the issue with the Assam government.

"We have got no problem with Hima. Yes, she will be joining the camp a little late. We have spoken about it. In fact, I have been talking to Hima almost every day. There is absolutely no issue at all," Adille J Sumariwalla, the president of the Athletics Federation of India, was quoted by Khaleej Times.

"When she comes back from Assam, she will start her regular training. And we have full confidence in her that she will continue to perform at a high level for India in future international events."

But when has a controversy sparked once died so easily. A hurt caused to fans, healed so soon. Social media warriors are all riled up. They feel their fears are coming true.

So hima das has already started missing afi training camps and is horribly late for her practice sessions This is what happens when fame gets to you!! Looks like we won't be getting that medal anytime soon

Just what we feared. Hope sanity returns and all those pampering the bright talent leave her alone. So  much attention can spoil even the veterans leave alone a youngster like #HimaDas https://t.co/lpX50HG8sY

Better late than never. She needs to be treated like an athlete first and a celebrity second. So if she needs to head back to training then she jolly well should return. Only for her best!!

When it comes to sports, success is a cause for national celebration, failure, of course, is a personal battle. Those who manage to excel become the nation's darlings, the others remain independent strugglers/competitors. Part of this appropriation and desertion are the pitched battles and high stakes in the international arena. Fans feel there is more at stake for the country's collective pride than Hima's personal life and struggles, her trials and tribulations. It's a different thing that everybody loves a rags-to-riches story. However, once the goose will stop laying golden eggs, she will not be forgiven for "letting us down".

Even if Hima is not ignoring her training sessions, this chastising was inevitable to come her way sooner than later. Fanfare is never unselfish. We the hero-worshippers know how to exact our revenge. We feel we have every right to bring someone down from the pedestal that we created for her.

But is it fair to judge an athlete and her talent and integrity and dedication so soon? Isn't it unfair generalisation that success has gone to her head. Aren't we putting too much pressure on a young talent and if, god forbid, she buckles under that pressure, will we spare her? 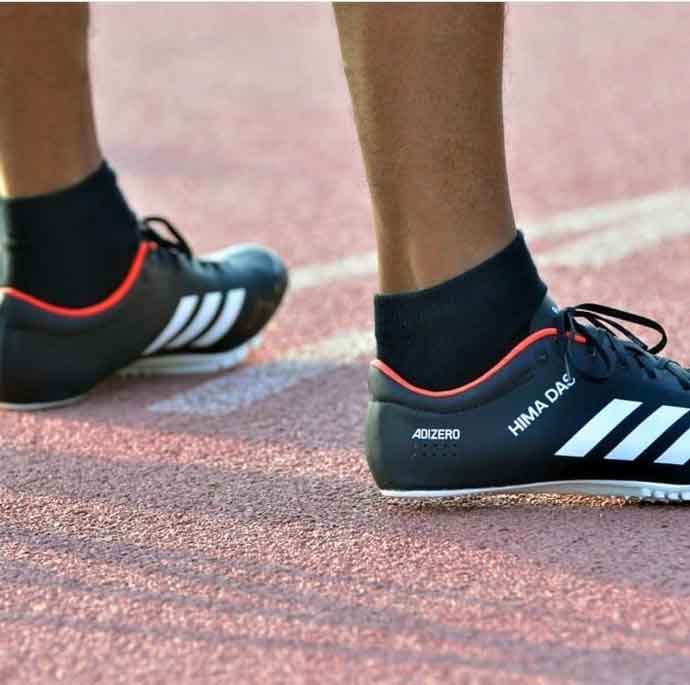 The German giant, Adidas, has come up with these custom-made shoes bearing Hima's name. (Credit: Twitter)

Truth be told, the appeal for most of us is not the gold or silver medal that is being won by a sportsperson, but the fact that we see in them ourselves and the power to overcome our personal struggles in everyday lives.

The track that Hima runs on is nothing but a reflection of our life and its goals. We want Hima to chase and win them too.

In the end, we are not rooting for Hima or any of our national favourites. We are just rooting for ourselves. Every race that Hima will win will also make a champion out of us.