Orchard owners are worried as they have not been able to source the solidly-built Nepalese labourers needed for the harvest of the apple crop.

As you zip past Himachal Pradesh’s capital, Shimla and cross the small sleepy town Fagu, the cold breeze and juicy red apple-laden trees on both sides of the road welcome you. But as you stop by to ask the orchard owners or workers there; they would tell you that they are worried as they have not been able to source the solidly-built Nepalese labourers needed for the harvest of the apple crop.

In fact, these labourers assist with all kinds of strenuous work, including digging pits, planting saplings, spraying chemicals, plucking, packing and transportation. They are the spinal cord of the state’s Rs 4,500 crore apple economy. The labourers used to come to Himachal Pradesh in April and would work till the setting of winter. 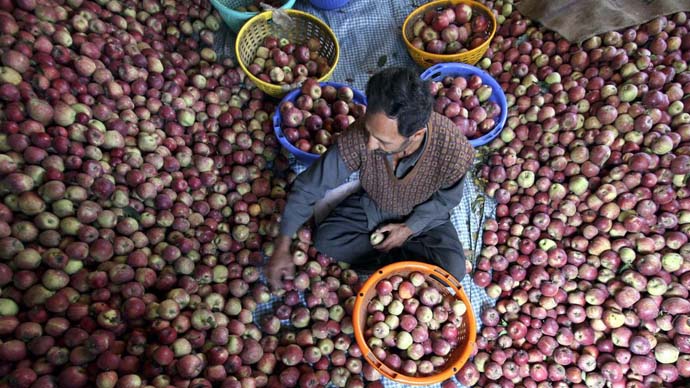 The apples from Himachal Pradesh comprise 21.1 per cent of the national consumption of the fruit. (Photo: Reuters)

The standoff between India and Nepal has prolonged the lockdown of the border due to Covid-19. This doesn’t allow these labourers to come to apple orchards in Himachal Pradesh and Uttarakhand. The harvest season in the state has already started and ends with apples from Kinnaur in September. It is expected that orchards in the state this year will produce roughly around 30 million boxes of this fruit. The apples from Himachal Pradesh contribute 21.1 per cent in the national consumption and it is only next to Jammu & Kashmir's apples, which will come to the markets after September.

Chief Minister Jairam Thakur has asked External Affairs Minister S Jaishankar to intervene. Meanwhile, Thakur is in touch with the chief ministers of Bihar, Uttarakhand and Uttar Pradesh to send across their labour for this season. The arrangements, such as special buses and enhanced labour compensation, have been made to bring some labourers from the Tarai region and other regions adjoining Nepal. The apple growers are still apprehensive, as this would require re-skilling and the work would seek more of their attention.

Meanwhile, the state government is pushing the logistics and packaging infrastructure in the state. 1.3 crore boxes have been made available, along with moving the state-owned HPMC and their affiliates to help orchard owners to sell the produce in the markets of Delhi, Chandigarh, Punjab and Haryana. In absence of the desired helping hands, the orchardists are keeping their fingers crossed.

Also read: Did you know eating apples can help you lose weight?

Post your comment
#Nepalese labourers, #Lockdown, #Apples, #Himachalpradesh
The views and opinions expressed in this article are those of the authors and do not necessarily reflect the official policy or position of DailyO.in or the India Today Group. The writers are solely responsible for any claims arising out of the contents of this article.