Deluge To Drought: Ice melt in the Himalayas and Hindu Kush mountains will leave India dry in 80 years

President Trump can keep denying it as much he wants, but nature has made it clear that the man who is supposedly one of the most powerful political leaders in the world is absolutely powerless when it comes to combating nature's retaliation for anthropological actions.

BREAKING: "I don't believe it."President Trump passively rejects the findings of the major new US government multi-agency report that says climate change will wallop the US economy in years to come. https://t.co/ImcZSeAowf pic.twitter.com/hcUnY8Jdui

One-third of the ice in the Himalayas and Hindu Kush (HKH) mountains will be lost due to rising temperatures by the end of the century — that's even if nations take aggressive measures to decrease greenhouse gas emissions, according to the latest report compiled by more than 200 scientists. 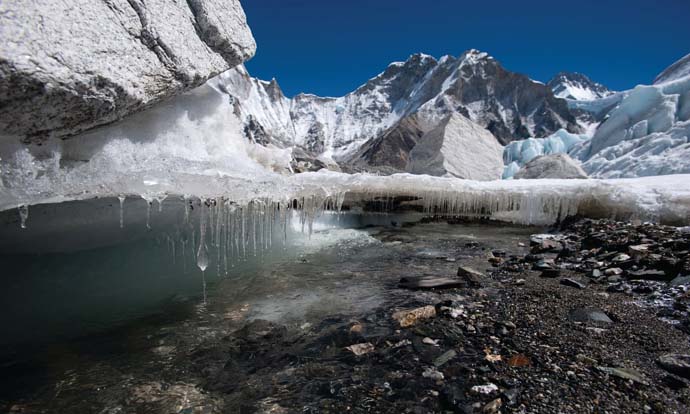 One-third of the ice in the Himalayas and Hindu Kush mountains will be lost due to rising temps by 2100, threatening the water supplies for nearly 2 billion people, according to a landmark new report.

The International Centre for Integrated Mountain Development (ICIMOD) — a regional intergovernmental body — on February 4, 2019, released the 600-page assessment report that was requested by the eight nations in the Hindu Kush/Himalaya range.

We swim together — and sink together

The HKH region stretches 3,500 km across Afghanistan, Bangladesh, Bhutan, China, India, Myanmar, Nepal and Pakistan. About 250 million people live in the mountains and 1.65 billion people in river valleys below. Changes in river flows could also harm hydropower production and cause more erosion and landslides in the mountains. 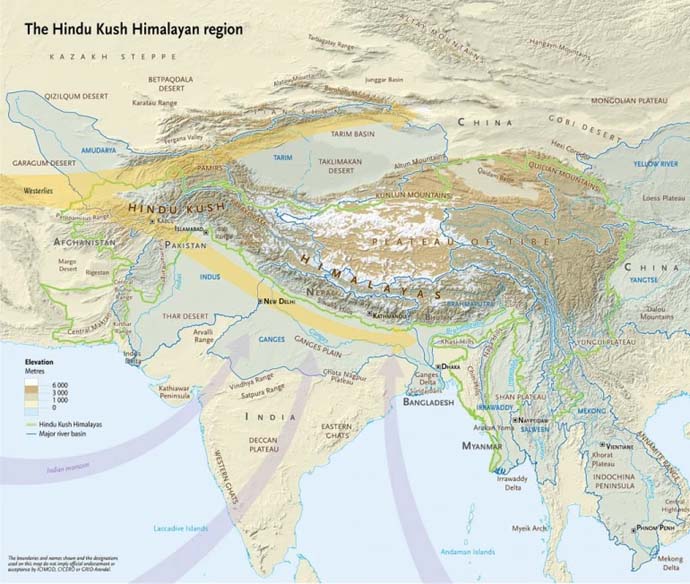 The finding of the report means that even if the world leaders — including President Trump — wake up to reality now and start cutting carbon emissions dramatically, the glaciers along the Hindu Kush Himalaya (HKH) region will still thaw by 2100.

If emissions are not cut, the loss soars to two-thirds, the report found.

The thawing of glaciers will have a direct and disruptive impact on the flow of the rivers that are vital for growing crops in India, Pakistan, China and other nations. The study says the flow of rivers, including the Yangtze, Mekong, Indus and Ganges, will be affected — farmers here rely on glacier meltwater in the dry season.

Rome was not built in a day

In the 20th century, the HKH region oscillated between warming and cooling phases.

In the first 40 years, it reported warming, followed by a cooling phase in 1940-1970.  However, since the 1970s, about 15 per cent of the ice in the HKH region has disappeared as temperatures have risen. Considering the length of the HKH range though, the impact of warming is variable. Some glaciers in Afghanistan and Pakistan are stable and a few are even gaining ice — most probably due to the increased cloud cover that shields the sun and changed winds that bring more snow.

However, even these are not impervious to the rising temperatures — they will start melting with future warming, says Philippus Wester, a water and climate scientist at the International Center for Integrated Mountain Development (ICIMOD), who led the report.

“This is the climate crisis you haven’t heard of,” says Wester. “Global warming is on track to transform the frigid, glacier-covered mountain peaks of the [Hindu Kush/Himalaya] cutting across eight countries to bare rocks in a little less than a century.”

The deluge that will lead to drought

Common sense dictates that the melting of glaciers will increase the water in the rivers — and eventually cause a deluge.

However, Wester says there are two sides to this coin.

“Melting glaciers will increase river flows through to 2050 to 2060 and push up the risk of high-altitude lakes bursting their banks and engulfing communities. However, from the 2060s, river flows will go into decline. The Indus and central Asian rivers will be most affected, and those areas will be hard hit,” he states. “Despite being far more populous, the HKH region had received less attention than other places, such as low-lying island states and the Arctic, that are also highly vulnerable to global warming,” he adds. 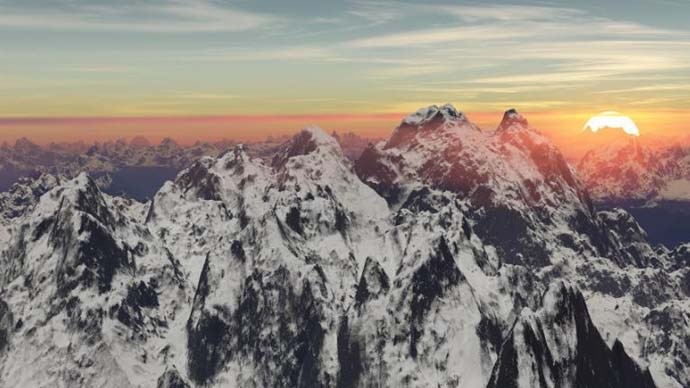 Not so frosty anymore — the ice from the HKH will be lost sooner than we think. (Photo: India Today)

The authors further added that the people living in small island states were often viewed as the most vulnerable to climate change because of rising sea levels. “It’s not just occupants of the world’s islands that are suffering. “We need to start thinking of mountain regions as climate hotspots worthy of urgent attention, investments and solutions,” Dasho Rinzin Dorji, an ICIMOD board member from Bhutan reportedly said.

To take action or stay with inaction?

If the apocalypse is inevitable, why not resort to inaction?

The scientists found that if nations drastically cut greenhouse gas emissions and keep global warming to 1.5 degrees Celsius, the Hindu Kush/Himalaya range will lose one-third of its ice by 2100.

A temperature rise of 2 degrees Celsius would lead to 50 per cent of the ice being lost, and if the global temperature increases by 4 to 5 degrees Celsius, two-thirds of the region’s glaciers would be gone in the same period, the report said.

Inaction would accelerate the apocalypse.

Aggressive action — if taken now — might just help us delay the catastrophe that we are accelerating at a breakneck speed.

Donald Trump. Are you listening?

#Drought, #Glacier, #Climate change, #Hindu kush
The views and opinions expressed in this article are those of the authors and do not necessarily reflect the official policy or position of DailyO.in or the India Today Group. The writers are solely responsible for any claims arising out of the contents of this article.