Can rakshasas or asuras be called the Hindu devil?

Evil is a concept used by religious folk in the West to explain negative events that have no root cause. God is good and kind and so he cannot be the source of hurricanes and tornadoes, and murders and rape. So these negative events are attributed to the devil who spreads evil. Of course, people argue if God is all powerful why does he not defeat the devil and end all negative events. To this, the priests who have appointed themselves as defence lawyers of God say: we are suffering for the evil decisions made by humans who have succumbed to the devil’s temptations. God had given humans the freedom to choose between himself and the devil, the good and the evil. Death of Hiranyaksha, the son of Diti, at the hands of Vishnu's avatar, Varaha (Credit: Wikimedia Commons).

Such ideas are alien to Hinduism, Buddhism and Jainism, where all events are the outcome of karma. Every action is karma. Every reaction is karma. Every cause is karma. Every consequence is karma. We live in a web of karma. We have control over our karma, but not on karma generated by others. And so bad things happen to good people and good things happen to bad people. Good and bad are human judgements, based on how we interpret the world. There is no good or bad in the world itself; it's an outcome of human understanding. People with lesser wisdom prefer to divide the world into binaries of good and bad, right and wrong. People who are more wise, see the bigger picture, and hold no one responsible for good or bad events. They need neither god nor devil. So there is no need for shaitan. Buddha, Tirthankaras, Brahma, Vishnu, Shiva and all the gurus help the ignorant become wise so we don’t feel the need to describe an event as evil. Every event, even the inexplicable, irrational ones, has a cause. There is no God or devil out there causing it. God, in Hinduism, is our ability to be wise, to look beyond good and evil.

The puranas say that all creatures are born of Brahma. From Brahma come various rishis and prajapatis who father different kinds of living creatures. So Kashyapa, son of Brahma, has many wives such as Aditi, Diti and Danu, who give birth to different children such as adityas, daityas and danavas. Though born of same father, adityas and daityas are always quarrelling. English writers called adityas the gods of Hinduism and daityas as the demons of Hinduism. Daityas and danavas are clubbed together as asuras. But things are not so simple.

Diti was about to give birth to a child greater than Indra, leader of adityas. Indra cut the embryo into 11 parts. Each part started to cry. Indra said, "Don’t cry and so they called themselves maruttas, the children who don’t cry. They became followers of Indra, and friends of the adityas, and called themselves 11 maruttas. They were also called rudras, the howlers. Thus, the 33 "devas" or gods of Vedic-Hindu mythology were made of 12 adityas and 11 maruttas as well as eight vasus and two ashwins, not all born of the same mother, but everyone traced to the same father, Kashyapa. Enemies of the devas, also born of Kashyapa, were called asuras. Their battle was vertical between earth and sky, with asuras inhabiting realm under the earth (patala) and devas occupying the glittering realm beyond the sky (swarga).

Rakshasas descended from another son of Brahma - Pulatsya. From Brahma came Pulatsya, from Pulatsya came Vishrava, from whom came the rakshasas and the yakhasas, who were led by Ravana and Kubera respectively, according to the Ramayana. Just as devas fought asuras, rakshasas fought yakshas. Rakshasas lived in south while yakshas moved north. Rakshasas also fought rishis. Rishis clubbed the rakshasas with asuras. Hence, in the Mahabharata, the various forest dwellers who oppose the Pandavas and the Vedic lifestyle - Baka, Hidimba, Jata, Kirmira - are all called asuras. Vedic lifestyle was based on yagna, that is exchange, you give in order to receive, while rakshasas lifestyle was based on either grabbing or sharing, suggesting an old tribal order. In fact, rakshasas are described as guardians (raksha) of forest. Thus, the battle here suggests conflict between rishis who preferred agriculture and trade and rakshasas who preferred old hunter-gatherer ways. The battle here is horizontal on earth, between settled village communities and nomadic tribals. 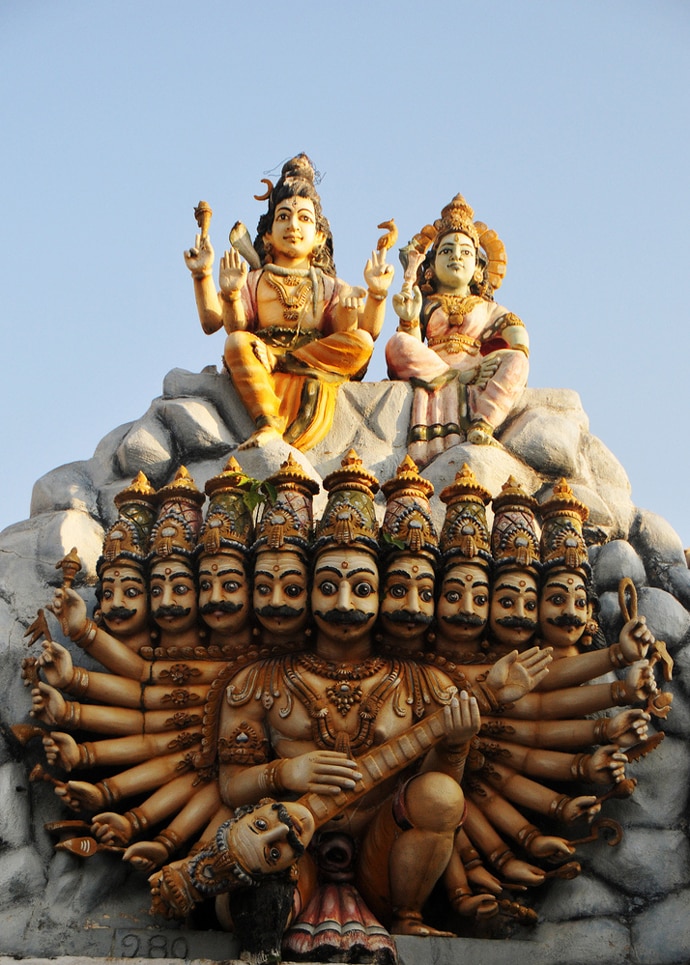 Ravana, a rakshasa, is described as Brahmin and devotee of Shiva (Credit: Wikimedia Commons).

Curiously, there in the list of marriage, deva-marriage means the father giving his daughter to a man who proves his worthiness by serving the father; asura-marriage means where a man buys a wife; and a rakshasa-marriage is one where a man abducts a wife. Thus, we see asuras linked to wealth and rakshasas to force. Lakshmi is often called patala-nivasini (resident of the nether regions) as all wealth comes from under the earth. She is called Paulomi (daughter of the asura-king Puloman) which makes her asura-putri (daughter of asuras), who rises up from the below to become deva-patni (bride of the gods).

Asuras are sometimes like tree spirits who are killed. Hence, we find gods kills asuras during harvest time: Krishna kills Narakasura, Durga kills Mahishasura, Vishnu overpoweres Bali. Their enemy is the devas who are supported by later Puranic gods like Shiva, Vishnu and Devi. Rakshasas are in conflict with humans and sages. Rama kills Ravana and his brothers and his sons. They seem to follow matysa nyaya, or the fish law, which is law of the jungle: might is right. Rama and the rishis follow the dharma way, where mighty have to protect the weak.

Indians educated in English got confused and started using rakshasas and asuras interchangeably. Both were "demons". Both were manifestations the "devil". Contrarians and social activists went out of the way with no data to speculate wildly and prove these "demons" were wronged subaltern people, dark Dravidians and tribals overpowered by white Aryans. They use simplistic racial arguments and pointed to look at the black/green colour of Mahisha. They ignore that Rama and Krishna are portrayed as dark while Ravana (a rakshasa) and Prahalada (an asura) are painted as fair. Hinduism saw asuras and rakshasas as different types of beings, born of Kashyapa and Pulatsya, one living under the earth, and one living in forest. Devas had amrita (nectar of immortality) while asuras had sanjivani vidya (knowledge of resurrection). Both were equally powerful. Devas were powerful in summer, asuras in winter. Rakshasas were seen as barbarians by some as they opposed Vedic way. Yet the king of rakshasas in Ramayana is a Vedic scholar, who is associated in later scriptures with Tantra, Shaivism and Tantrism. We learn of good rakshasas like Vibhishan just as we learn of good asuras like Prahalad and Bali, who adore Vishnu.

Words like evil and devil make no sense in rebirth worldviews. Hence, have no place in Hinduism, Buddhism or Jainism. Asuras and rakshasas are powerful and eternal forces that we may not like but have to co-exist with. We live in a web of multiple forces, some that help us and some that harm us. The forces themselves are neither negative or positive. It's our relationship with them that makes them negative and positive. The wise will not judge; they will just understand.

#Hinduism, #Hindu devil, #Asuras, #Rakshasas
The views and opinions expressed in this article are those of the authors and do not necessarily reflect the official policy or position of DailyO.in or the India Today Group. The writers are solely responsible for any claims arising out of the contents of this article.