Bindi, tulsi, sewai and Hanuman Chalisa: As a devout Muslim and a proud Indian, all of these add to who I am

Being a Muslim doesn't mean you can't light a diya in a mandir or not read the Bhagavad Gita or abstain from wearing a bindi. Doing all this has only helped me understand my faith more.

My neighbour has gone out of town and like always, she’s left her house keys with me. She does that so I water her plants daily.

I also have an additional job to do in her house.

At sundown, I’ve been requested by her to light a diya in her mandir and switch on an LED OM sign that I’ve always noticed glimmering peacefully in her balcony.

Every day without delay, just before I am about to say my maghrib (evening) prayers at sundown, I rush to her house to do the needful.

While I was lighting the diya on the first day, I noticed a bell kept on the shelf next to the mandir, and I remembered its sweet peal that wafts into my balcony when my neighbour performs a small aarti every morning and evening. I smiled and a voice within told me to ring it before the mandir, just like my neighbour does. After all, the energies of the house are already missing its owners and probably, the peal of the bells too.

Therefore, without a second thought, I ring the bell before the mandir after lighting the diya and then quietly leave the house to offer my maghrib namaz on time.

My neighbour calls me late evening to ask if I had completed the small tasks that she had entrusted me with — and blesses me in return. 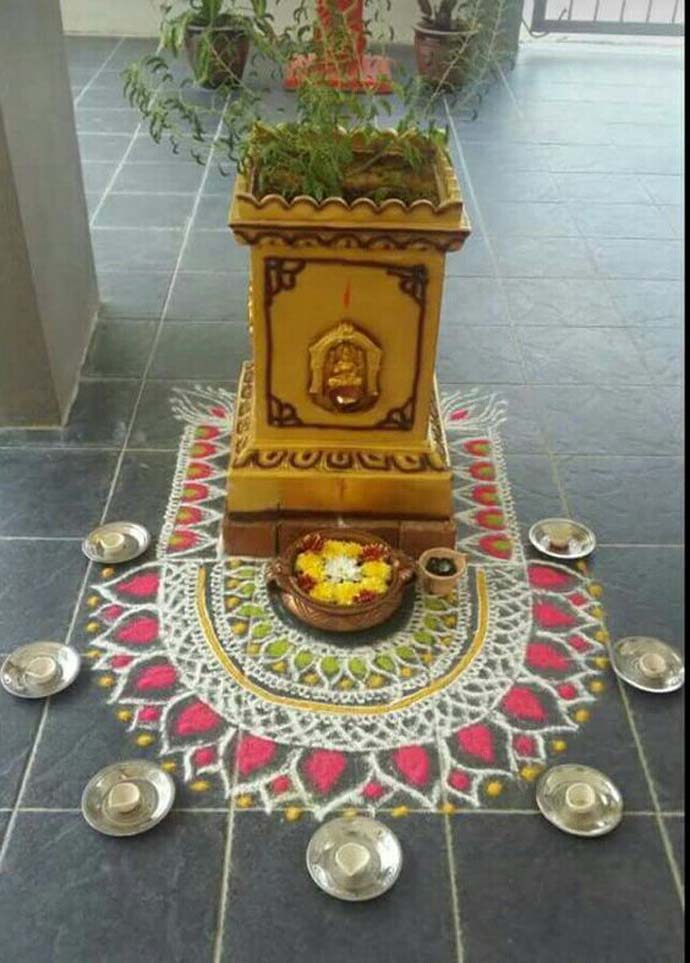 The almighty is all around. You only need to look. And Love. (Photo: Twitter)

Rewind to three years ago when I had moved into my flat.

My neighbours appeared to be very amiable and good-natured people and we would exchange the usual pleasantries. Then came one Eid and I carried a dish of sewai and knocked on their door, and said, “Eid Mubarak, Didi! I’ve got sewai for you.” She wished me Eid Mubarak in return — but politely refused to take the sewai, saying no one is fond of sweets in her house. I could gauge discomfort on her face at the prospect of having a meal cooked by a Muslim, but I thought I was overthinking.

After a couple of days, I again went to her house with a bowl of chholay. This time, when she refused again, I was pretty sure that they have reservations against having a meal cooked by me. Yes, I was a bit hurt but blamed the times that we’re living in. I blamed the media that’s constantly spewing venom and reinforcing the divide created by the divisive forces.

But I was determined to bring a change of heart in my neighbour.

The holy Prophet’s grandson, Imam Hussain’s saying has always inspired and guided me. “Hatred can only be won over by love,” while another Sanskrit quote, ”Love when you can, tomorrow isn’t promised," has always reminded me to act swiftly in showing love. The universe probably conspired and thus came the chance to break that awkward wall of discomfort that was invisible to the eye but could be felt between my neighbours and me.

My neighbour was going out of town and with some hesitation, she asked me to water her plants while they were away.

I happily agreed and diligently watered the plants every day. When they returned, I gave them their keys back. After the formal show of gratitude, my neighbour went to her balcony to give a cursory glance at the plants and after a while, knocked on my door. She was beaming with joy and this time, a bout of thank-yous came directly from her heart.

Apparently, the clay pot in which the Tulsi was planted had produced a new baby plant while my neighbours were away.

Being very religious people, they took it as a very good omen — and for the first time, she held my hands with friendly warmth, saying that my touch had proven lucky for them.

I’m personally not a very superstitious person, I didn’t think the way they did. The plant was destined to sprout, but yes, it did feel good to see that wall of awkwardness break between us. I could gauge a renewed warmth replacing the customary pleasantries. What followed later were an exchange of sweets on every Diwali and Holi — and sewai on Eid. Even on ordinary days, if something special was cooked in our houses, we would share it with each other. In my namaz, I thanked Allah for putting this love and warmth between us which was earlier unthinkable.

I wanted to share our story in these times.

Yes, like it always happens, extremists on both sides will find faults in me and my neighbour.

I have often been trolled by both sides, but it pains more when my own community criticises me for donning a bindi or sindoor whene I wear a saree. Many even criticise me for wearing a saree! It’s very important in these times to demarcate between culture and religion. Clothing is an extension of culture — and wearing a saree is very much a part of Indian culture.

Hazrat Ali said, “The culture of a region is always dominant than religion.” And the holy Prophet Mohammad said, “Nothing is above the love for one’s country.”

As long as my personal beliefs related to faith are not threatened, I don’t find a reason not to assimilate myself in the culture of my country, where my ancestors have lived and now lie peacefully buried in its soil.

There’s an equal need to spread awareness in my own community regarding the difference between what is Arabian culture and Islam. Sadly, most of us make Islam synonymous with Arabian culture, which holds us back from assimilating in our very own culture. As Irena Akbar in a recent Indian Express article, rightly said, “Secularism is no spectacle: Inclusive India shines through simple, everyday interactions.”

I agree with that to the last syllable. However, I’d like to add that even if I, as a Muslim, choose to wear a bindi, then it doesn’t make me a lesser Muslim. No less a Muslim: Often, Muslim women like Nusrat Jahan do wear sarees and sindoor. And it's their right to choose. (Photo: ANI)

The Quran says, “Laa Ikraaha Fid Deen” (There’s no compulsion in religion).” When the Quran has laid so much emphasis on being moderate, then why do we become aggressive at the slightest of provocation — or what we perceive as a provocation? Why are we quick to jump the troll wagon to fire at Indian Muslims like me who don’t wear the hijab but do offer our daily prayers, who don’t mind wearing a kalaawa or a tilak when visiting a temple because that in no way weakens or interferes with my faith — rather, it reinforces the love for mankind by knowing different cultures and religions closely that eventually lead to the almighty.

The need of the hour is to increase personal interaction with each other. I’m again reminded of the concept of Vasudev Kutumbkam (The whole world is one family).

Recently, the unfortunate incident at Lal Kuan, New Delhi, could have flared into a riot. But thanks to the prudent intervention of the members of the Aman committee who put up a show of peace and solidarity, it didn't. Local Muslims came out and put up bhandaras and showered petals on the shobha yatra. This was not cowardice but being true to the spirit of Islam which lays emphasis on peace — the Islamic salutation, 'Salam alai Kum' means ‘Peace be upon you’ which is no different from what the Vedas preached through ‘Om Shanti Shanti Om’. 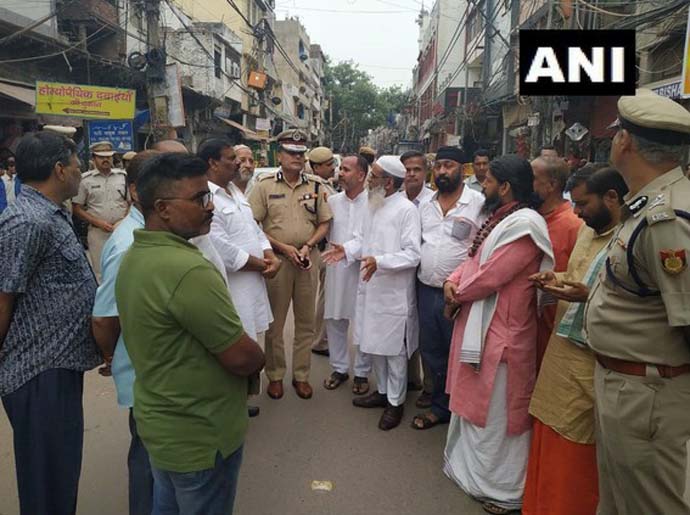 How to handle stress: The Lal Kuan incident in Delhi could have sparked communal violence — but it didn't. (Photo: ANI)

Coming from a family of scholars, we have been encouraged to read with understanding. Whether we read literature or theology, it was emphasised to understand the text. This trait has helped me in understanding the Quran, the Bible and the Bhagavad Gita better. I remember when I was reading the Hanuman Chalisa once, I came across the verse, “Ashta Siddhi, Nau Nidhi ke Daata; As Bar deen Janki Maata.”

As soon as I read it, I was intrigued to find out what were those siddhis and nidhi and to my surprise, even a very devout Hindu friend, didn’t have accurate information about them. That day, both of us learned about its meaning together and now, its meaning will stay with me forever. I brought up this incident for the simple fact of reading all the texts, whether the Quran, the Bible or the Bhagavad Gita, and understanding, for only then we would become more humble and see the uniformity in all religions, despite different ways of practising them.

That’s precisely the reason I choose to read the Quran with meaning and even while offering namaz, I try to ponder on the meaning of each word as that helps in falling in love with the Almighty even more.

I’d like to conclude with the verse of The Quran, Chapter 49, Surah-i- Hujurat:

“O mankind! We created you from a single (pair) of a male and a female, and made you into nations and tribes, that ye may know each other, not despise each other. Verily, the most honoured of you in the sight of Allah is (he who is) the most righteous of you. And Allah has full knowledge and is well acquainted with all things.”

Also read: Godse vs Jinnah: How the BJP treats admirers of the two historical figures

#Eid, #Hindu Muslim unity, #No burqa, #Muslim women
The views and opinions expressed in this article are those of the authors and do not necessarily reflect the official policy or position of DailyO.in or the India Today Group. The writers are solely responsible for any claims arising out of the contents of this article.

The writer is a news anchor at All India Radio. She likes to translate Urdu literature into English.