The actor should condemn the mob instead of fanning its ego.

Almost a decade ago, I blogged about my disappointment with Bollywood actress Shilpa Shetty's comment that anybody who wants to marry her should take her father's permission, reinforcing the patriarchal idea that daughters remain subjugated to their fathers’ will even after becoming adults.

I am reminded of it today because even after a decade, leading Bollywood female icons are far from being truly empowered and still utterly incapable of being real inspirations for young Indian women. Highly successful women in popular culture are capable of making a big difference in the way the younger generation perceives what it means to be a brave, strong and independent. But is professional success enough?

Coming back to the present, actress Priyanka Chopra has succumbed to the coercive demands of an online mob outraging against her US television series Quantico. In one of the recently aired episodes of the series, there was a plot involving a Hindu extremist attempting to carry out terror activities that was busted by Priyanka's character on the show. Members of a Hindu extremist outfit set to fire posters saying 'Priyanka Chopra is a traitor, send her to Pakistan'. Photo: PTI

The scene led to public outrage from the far-Right Hindu nationalists. In a press release, one of the fringe groups supposedly said: “Hindu Sena appeals to public in general to boycott any work, ads or movies of Priyanka Chopra and appeal to Indian government to strip her of Indian citizenship and deny her entry in India.”

Such demands are downright anti-constitutional and reek of the very intolerance and extremism they seem to deny, yet both the television studio and actress Priyanka Chopra have now apologised for hurting sentiments.

Chopra's decision was unfortunate and shameful to say the least. At the outset, there was no valid basis for the furore over a piece of fiction, particularly when, for decades, both Bollywood and Hollywood have portrayed Muslims as terrorists and villains. The fact that Quantico has a plot involving a Hindu extremist is merely a reflection of the growing Hindu extremism in India.

It is just a case of art imitating life.

Secondly, Priyanka Chopra may have been able to build a perception of being a brave woman with strong values who has broken the glass ceiling but professional success is not enough unless you are brave enough to hold contrarian views in adverse situations. Time and again, some of the actions by Priyanka Chopra appeared to be hypocritical and bereft of any real ideology and simply following popular demands. In December 2017, in an interview to NDTV, she refused to take a stand on the controversy involving Deepika Padukone and her film Padmaavat. On being asked a direct question whether she condemned the death threats by Karni Sena and few BJP politicians, she raised a counter question: "Why do you media guys want to put us actors to a corner... so that you can run your ticker." The audience clapped because she bravely snubbed the liberal media but truth is she just avoided taking a position which was likely to go against popular demand.

This was contrary to the boldness she pretended to have by taking a strong position against President Donald Trump's anti-immigration policy. It is rather hypocritical for her to speak out against the US president but not against fringe political elements in India.

Fans of Priyanka Chopra defended her double standards by arguing that the exercise of freedom of speech against politicians is not the same in India and US, and therefore she cannot afford to have strong contrary opinions in India. That is one explanation, the other is that in Hollywood, it is cool to hold critical opinion against Donald Trump. Either way, her actions are populist not brave.

This is not the first time the Hindu nationalist mob on social media has attacked Priyanka Chopra. In May 2018, the actor visited a Rohingya camp in Bangladesh and made an appeal to the world to care for the Rohingya children. The online mob was quick to attack her for supporting Rohingyas, one of the most persecuted communities in the world and the liberal media stood by her and condemned the outrage. But today, she gave up on her secular liberal principles. Either that, or maybe she never had any principle and her visit to the Rohingya camp was a mere photo-op, yet another fad among Hollywood actors. 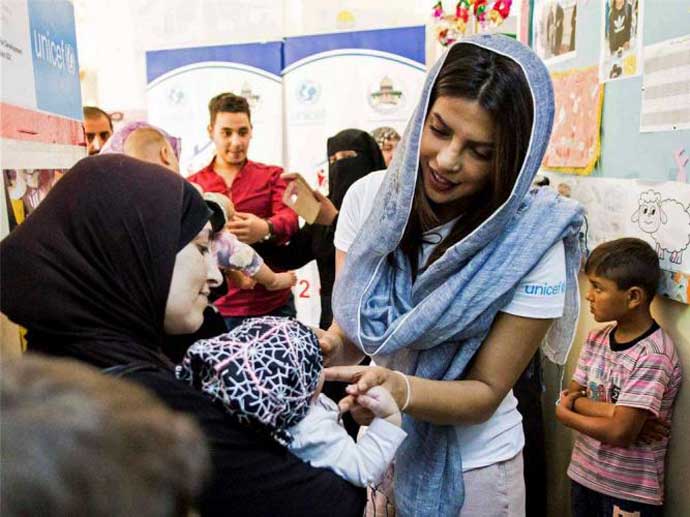 The timing of her apology is significant. Police investigation into activist Gauri Lankesh's murder has revealed that she was killed by extremists who were well connected to Hindutva outfits and, in fact, groomed by Hindutva ideology. In the recent years, with the advent of a Hindu nationalist political regime at the top, there have been innumerable incidents of violence and crimes committed by people motivated with Hindutva ideology, and the patterns reveal a textbook case of religious extremism leading to the path of full-blown terrorism.

Hindu terrorism is no longer a myth, it is a grim reality.

If Priyanka Chopra was indeed brave and if she ever read the newspaper she should have condemned the mob instead of fanning their ego, and enabling their intolerance and extremism. It is a great thing for young Indian women to be inspired by her because she broke the glass ceiling in the entertainment industry. But unless popular icons are brave enough to question patriarchal authority at home and powerful fascist regime in public, the imagery of who is a “brave” “strong” and “independent woman” remain ambiguous and confusing.

Not Priyanka Chopra or Shilpa Shetty, but Swara Bhaskar is who Indian women should be looking up to if they want to know who a brave strong and independent woman is like.

Also read: With its 'Hindu terrorist', will Quantico end with a whimper, not a bang?

#Quantico, #Priyanka Chopra, #Hindu terror, #Bollywood
The views and opinions expressed in this article are those of the authors and do not necessarily reflect the official policy or position of DailyO.in or the India Today Group. The writers are solely responsible for any claims arising out of the contents of this article.