Is the Hindu thread ceremony same as baptism?

The thread ceremony is not the same as baptism. Baptism is a Christian ritual by which one ceremonially declares that one accepts Jesus Christ as the son of God, and humanity’s saviour. In other words, baptism marks one’s entry into the Christian church; unless baptised, one is not a Christian. Likewise, until a man undergoes circumcision, he cannot be Jewish, or Muslim. These are ritual declarations of one’s covenant, or contract, with God. This idea of making a contract with God and so becoming Christian by a ritual is alien to Hinduism. For one is Hindu by birth.

The first birth of humans takes place physically via the mother’s womb. The second birth is psychological, via the guru’s teaching of the Vedas. After this ceremony, the child is ready to go to school and receive education. He, or she, is trained through various practices and teachings to expand (brah-, in Sanskrit) his or her mind (manas) and so discover the Brahman. This was the original meaning of the Brahmin, he who expands the mind and seeks the infinite Brahman. 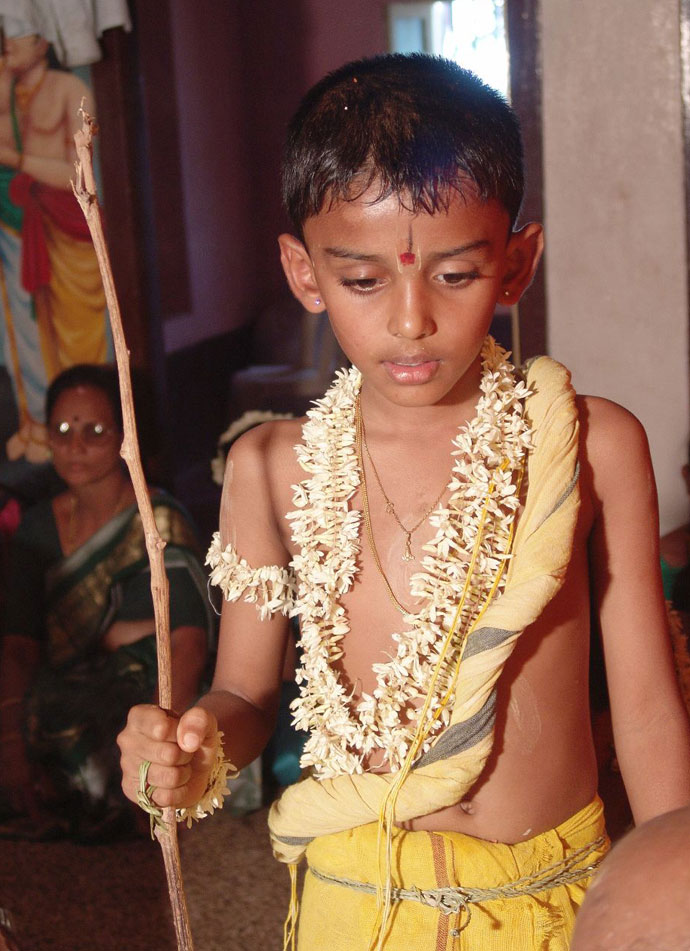 Some people wear these threads from childhood, throughout their life, while others wear it only while performing Vedic rituals, like marriage and funeral ceremonies. (Credit: Wikimedia Commons)

The thread ceremony is known by various names in different parts of India: Upanayanam in South India, Brata ghara ritual in Odia, Janayu in Gujarat, Munja in Maharashtra and Karnataka region, Poita in Bengal and Odisha.

The ritual involves the placement of nine cotton fibres, twisted to make three threads, and knotted as one and placed over the left shoulder.

Historically, thread ceremony is linked to Vedic Aryans. We find a similar ceremony amongst Parsis, who are an offshoot of the Indo-Iranian branch of Vedic Aryans. In an elaborate Navjote ceremony, the thread of 72 fibres (representing 72 chapters of the sacred text) is tried around the waist of the boy or girl. This is worn three times around the waist and knotted in front and the back. The untying and retying is done by the faithful to the chanting of prayers several times a day. Like baptism, this ceremony, marks entry into the Zoroastrian faith which thrived in Iran (ancient Persia) until the rise of Islam. Though linked to Vedic roots, Zoroastrian faiths is highly linear in structure (one life) in contrast to the Vedic faiths that are cyclical in structure (many lives). 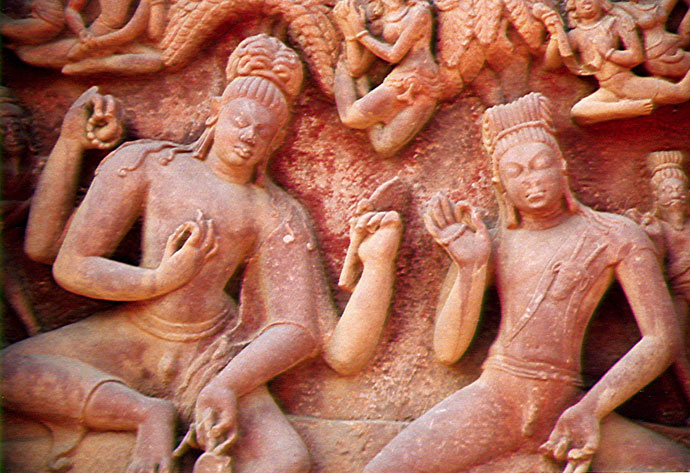 A 5th-century image of Nara and Narayana showing deer skin shawl and head at a point where Brhama-granthi is now located. (Credit: Wikimedia Commons)

In Vedic times, there was probably no thread. Instead a garment was worn over the left shoulder during household rituals and right shoulder during funeral rituals. Some Brahmins used deer skin for upper garment and the spot where the head of the deer was located is today indicated by the Brahma-granthi knot. This is speculation, of course, but what scholars are fairly confident is that the "thread" became a key part of Hindu dress code in medieval and modern times, as caste system became increasingly rigid and draconian.

In the Dharmashastras, there is reference to sacred thread ceremony of men and women, and members of all varnas, not just Brahmins. In art, we find gods and goddesses sporting the sacred thread over their left shoulder. The thread is sometimes bejewelled, revealing they are all twice-born, with access to Vedic wisdom. However, only in medieval times, this became a singular ritual to identify the Brahmin male, and locate him on top of the Hindu caste pyramid.

Today conservatives still see the thread ceremony as a particularly Brahmin male ritual ensuring caste structure. The not-so-conservative see this as a ritual for all children being initiated into the Vedic fold, irrespective of gender and caste. The modern see this as just a ritual that marks the child’s entry into formal schooling, where he or she prepares for the life ahead. They expand the narrow definition of Veda to include all knowledge, formal and informal, material and spiritual.