Why are Brahmin and Kshatriya aspirational for most Hindus and not Vaishya and Shudra?

Many people say that India’s caste system is simply a rational division of labour to promote efficiency and effectiveness. Those who say this usually associate themselves with the top two tiers (Brahmin and Kshatriya), less commonly with the third tier (Vaishya) and hardly any with the fourth tier (Shudra). If anyone says I am proud to be a Shudra, it is more from a sense of rebellion than wisdom or affection. And if people are proud to be Brahmin and Kshatriya, it has more to do with the desire to be dominant and less to do with wisdom or affection.

The chatur-varna system or the four-fold division of society was the hallmark of Vedic society. But it is completely theoretical, probably based on "aptitude" rather than "birth" but one is not entirely sure. The four tiers were - transmitters of Vedic lore (the Brahmins), those who controlled the land (the Kshatriyas), those who controlled the markets (the Vaishyas) and the service-providers (the Shudras).

In practice, Indian society has long been divided into jatis. There are thousands of jatis, as against four varnas. When people say caste, they are referring to a European term used to explain jati, not varna. We often confuse the two. Jati was an economic-political unit, based on vocation. You inherited your jati from your father. Jati was established by a relatively simple idea called "roti-beti": you ate with members of your own jati, and you married a boy or girl from your own jati. A jati functioned like a tribe. Just as inter-tribe marriage is not permitted, inter-jati marriage was not permitted. Crossing jati lines could lead to violence. 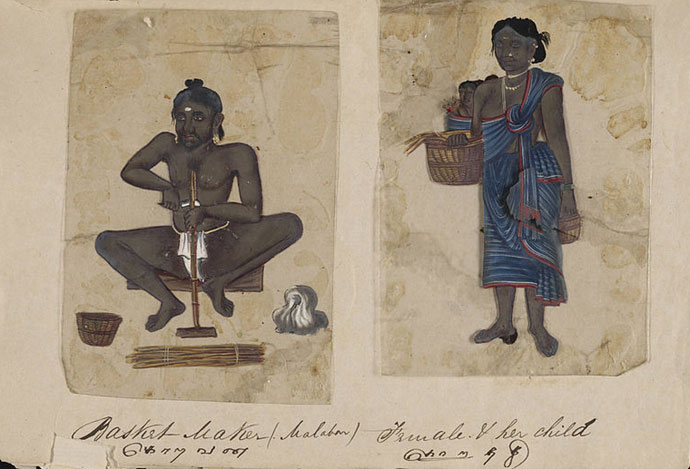 A page from the manuscript Seventy-two Specimens of Castes in India. (Credit: Wikimedia Commons)

The relative position of a jati in a village hierarchy, was determined by regional realities. For example, the jati of kayasthas in the Gangetic plains emerged with the rise of Hindu bureaucrats in Mughal courts. Not many people in south India would know how to locate a kayastha in their community. Likewise, few in Rajasthan would understand who Lingayats of Karnataka were, and where they stood in the caste hierarchy.

As a rule of thumb, those involved in priestly matters were Brahmins, and those who controlled the land were Kshatriyas. But where did you locate the bureaucrat who served in the king’s court? Was he Brahmin or Kshatriya or simply a Shudra, a service-provider? New warlords who came from outside like Sakas and Pallavas and settled in India were anointed as Kshatriyas and linked to the gods and to Puranic kings to grant them legitmacy. A rich money lender was a Vaishya but was he not a service-provider, providing banking services? And was a mercenary, who owned no land, and so sold his military services to the highest bidder, a Kshatriya or a Shudra? Mapping the thousands of jatis to the four varnas has always been a challenge. In the south, Brahmins became powerful by controlling many farmlands – the Brahmadeya villages and Agraharas. But did that not make them landowners hence Kshatriyas? Were the Peshwas of Maharashtra to be considered Brahmins or Kshatriyas or administration service-providers? These were complex matters. They led to quarrels.

Vedas do speak of a diverse society. The dominant members of society, the Brahmins, the land-owners, the rich and the powerful, turned this concept of diversity into a hierarchical society. They did it using the Dharmashastras. In the Dharmashastras, including Manusmriti, the Brahmin jatis mapped themselves to Brahmin varna. They were not interested in mapping the thousands of other jatis.

Every society in the world has economic and political hierarchies. What makes the jati system unique is the hierarchy of purity. Some service-providers were deemed "dirty" and denied access to the village well and even human dignity. This is the worst aspect of the caste system, something that is often denied by apologists. Was this recommended by Vedas? No, it was not. Veda spoke of atma, the soul, that is eternally pure, and values diversity not hierarchy. It spoke of fear and ignorance that nourishes the aham, the ego, which values the body, wealth and power, and institutes various hierarchies.

The Muslim kings of India did not bother with the jati system as long as they were treated as Kshatriyas. Poor Muslims gained status in their villages depending on the vocation they followed and the wealth they had. Like in Islam, Sikhism, in theory, opposed caste hierarchy and spoke of equality, yet within Sikh community the landowning Sikhs had higher status than the landless Sikhs. Same was seen in Christian communities of Goa and Kerala, where there is pride in having descended from "Bamon" and "Namboodri" jatis, which are local terms for Brahmin.

It was the British who, as part of the first census, tried to formally map the various jatis to the four varnas and it was a messy process as they realised that many communities of India did not have clear-cut jatis. A farmer in summer would be a soldier in winter – was he to be seen as Kshatriya or Vaishya (if he owned the land) and Shudra (if was landless)? The documentation of caste by the British fixed a relatively fluid system, and sought to establish an awkward singular national hierarchy which was distinct from the multiple regional hierarchies. This documentation played a key role in drawing attention to the plight of the Dalit communities. But it also demanded the construction of artificial hierarchies where once none existed. In newly emerging urban ecosystems, where it would have been easy to wipe out old caste identities, caste documents ensured the persistence of village prejudices.

After independence, the reservation policy ensured that hierarchy between jatis was ensured as it assumed some jatis did not deserve positive discrimination and some jatis did. And so poor members of "upper castes" suffered for the excesses of rich members of their own castes. Likewise, no one realised that many members of "lower castes" were richer and more privileged as they lived in urban areas. Attempts to homogenise Hinduism have failed as the reality of diversity of jatis persists and the assumed role of varnas demands satisfaction.

Today the jati hierarchy is being reinforced by political ideologies that want to split the thousands of jatis of India into two boxes: the oppressors and the oppressed, the privileged and the unprivileged, Savarna and Dalit. The doctrine of social justice is so combative that it ends up reinforcing hierarchies. Activists and politicians will not let you escape the Dalit or the Savarna tag, whether you want to or not, for as a member of a jati you are part of a vote bank as well as part of a mob.

Until the industrial revolution, every society was controlled by the intellectual elite (priests and philosophers), the landed gentry and the mercantile class. Rest were serfs and slaves. Craftsmen and traders had lower status. Lower still were labourers. Industrial revolution created a new class of bankers and businessmen and factory workers and clerks and corporate executives. Social mobility was possible. Still, society was dominated by the educated (Brahmins) and the powerful (Kshatriyas) and the rich (Vaishyas), not the service-provider (Shudra), which is a politically correct word for servant. It is so in India, it is so elsewhere.

We do not mind being servant (dasa) of God or guru, but not of other people because of feudal mindset. And we fear equality because it strips us of identity and status, and dissolves us in a homogenous social soul. Like the Brahmins of yore, and the British, and the government, we continue to map ourselves on the theoretical simplistic four-layered society of the Vedas, more often than not to feel good about ourselves.