Why do Hindus worship cows?

Hindus don’t just worship cows. They also worship cobras and monkeys and elephants, as finite forms of the infinite divine.

In Hinduism, God is visualised through various forms: elements, plants, animals, celestial bodies, artefacts, and geometrical forms. So, it is not uncommon for a Hindu to worship fire or water, the tulsi shrub or banyan tree, the sun or the moon, a pot or a sword, a yantra made of intersecting triangles, circles and squares. However, around the world the image of Hindus worshipping cow has captured the imagination of people, perhaps because in most parts of the world you eat beef, and you don’t see cattle roaming the streets. Snakes and monkeys and elephants are eaten in many parts of the world, but not in Europe. And perhaps that is why Hindu worship of snakes, monkeys and elephants does not get as much attention. 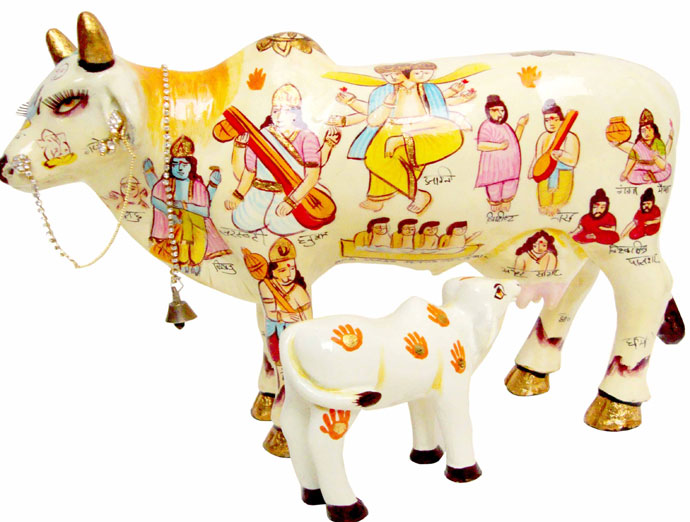 While the cow is a sacred animal, the male cow or bull has been castrated for centuries in India, turned into a bullock and used as a beast of burden to pull the plough or cart. In pastoral communities, a cow was useful as its milk provided nourishment and its dung served as fuel and plaster for the house and floor. Hence, cows were much prized commodities. Taking care of cows and not harming cows is recommended in various Brahmin texts. Was this meant for all communities or only Brahmins? That is a matter of speculation. By "cow" did they mean the milk-giving female or all species and genders of cattle? That is also a matter of speculation.

In Vedic times, a Rishi-marriage was one where a man gave his daughter to a rishi, along with a cow and a bullock so that they also had a source of livelihood. A buffalo could serve the same purpose. However, it was clearly the cow that was given more importance. In Vaishnava mythology, the cow came to be seen as an embodiment of Lakshmi, the goddess of wealth. In the Bhagavata Purana, the earth takes the form of a cow and asks Vishnu to protect her. That is why Vishnu, her guardian, is called Go-pala, protector of the earth-cow. The earth is visualised as being milked by all living creatures. And when kings plunder earth’s resources, they are described as cow killers, or cow tormenters, and Vishnu descends as Parashurama, Ram and Krishna, to kill the greedy king and let the earth drink their blood.

Indra is said to have Kamadhenu, a wish-fulfilling cow, that rose from the ocean of milk. Rishi Vasistha had a similar cow and when Kaushika tried to steal it, the cow produced an army to protect itself. Rishi Jamadagni also had such a cow, and when Kartaviryarjuna tried to steal it, his son Parashurama hacked him to pieces.

In Raghuvamsa, we are told how Ram’s ancestor Dilip shields a cow from attacks from a lion and offers himself as food to the lion. This can be taken literally – save the cow even if it means killing yourself. Or it can be taken metaphorically – where culture (king) restrains its hunger so that cultivated and domesticated land (cow) do not encroach too much the wild spaces (lion). This tension between destroying nature for the sake of culture is a major theme of kingship in India, and is described as dharma-sankat, for dharma is essentially a reversal of jungle law, where mighty protect rather than feed on the meek.

The image of Krishna as the lovable cowherd god has its origin probably in Tamil Sangam literature and became part of Sanskrit literature in Harivamsa, the appendix of the Mahabharata that describes Krishna’s childhood. In Bhagavata Purana, Krishna kills a bull-demon called Arishtha and a calf-demon called Vatsa.

Hermit orders such as Buddhism and Jainism popularised ideas of compassion, non-violence and vegetarianism. They opposed Vedic rituals that at one time included animal sacrifices. In fact, according to Jayadeva, Vishnu descended as Buddha out of compassion for animals that were being killed as part of rituals. 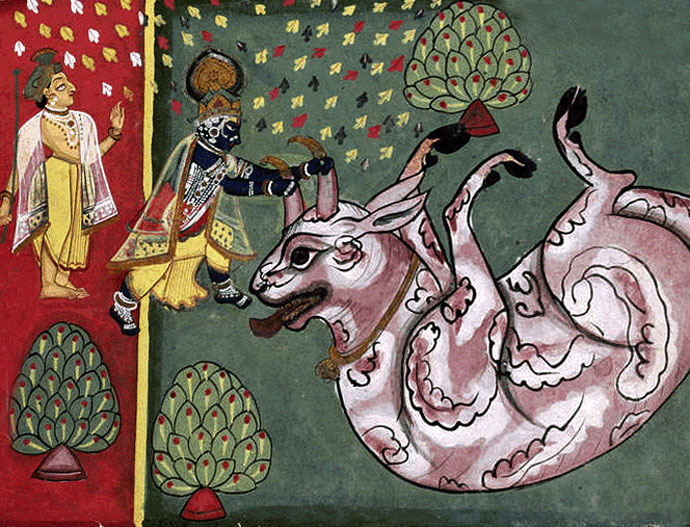 However, Hinduism, unlike Buddhism and Jainism, has never been prescriptive. Castes and communities created rules for themselves. Not for all. What was private was never public. As we have moved away from caste structure to uniform civil structures, certain caste groups are imposing their private eating habits on the public, a phenomena never seen before in India. The price of modernity, one can say.

Hinduism recognised that violence is integral to certain vocations like farming, animal husbandry and leather industries. It saw culture as essentially violent – the destruction of forests was essential to establish fields, the castration of bulls and buffaloes was necessary for creating draught animals, and meat was a good source of food, especially in arid areas where animals helped turn inedible plants to into food. This balanced view is expressed in the Vyadha Gita of the Mahabharata where a butcher from Mithila transmits wisdom to a hermit. It drew attention to that psychological violence can be as horrific as physical violence. And violence for food is not the same as violence for power.

In the past thousand years, as Islam and then British, came into India, Hinduism has become very fearful of contamination and obsessed with purification. Those who ate cows were seen as pollution while cow urine and cow dung were seen as purifiers. This symbolic value made cow a potent symbol of Hinduism, even more than old Puranic metaphors that equated cow with livelihood and the earth.

Increasingly we find posters that all gods being present inside a cow. Worshipping a cow then becomes equal to worshipping all Hindu gods. This makes cow sacred. There are also images of all the gods being present inside a tree, or inside a human. However, these have not acquired the same amount of attention. These images are meant to show that all gods are present in all creatures. That divinity pervades all things. However, the idea that all gods are present only inside a cow has been amplified so that eating a cow becomes equal to attacking Hindu gods. This powerful and popular code is now being used by politicians who wish to garner Hindu votes.