How did the world come into being according to Hinduism?

Because Hinduism is plural, with a vast collection of customs and beliefs of numerous communities, over many periods of history, there is no single story of creation. There are many stories, some from the Vedas, some from the Brahmanas, some from the Puranas; some are philosophical, based on concepts, and others are narratives based on characters. One can sense something common in all, but there is a great deal of variations.

The fundamental difference between the story of creation in Hinduism and Abrahamic religions is that Hinduism - like Buddhism and Jainism - views the world as eternal, going through phases of creation and destruction. So, beginning refers to the beginning of a phase, not beginning of the world itself. In Abrahamic mythology, the world comes into being from nothingness by the will of God; and it will end in nothingness. There is a starting and an end point. A segment, essentially. In Hinduism, it is a line, eternal and even repetitive. This difference in the notion of time, explains the difference in the creation of myths. So, while there is a definitive Genesis in Jewish, Christian and Islamic traditions, there isn’t one in Hinduism. 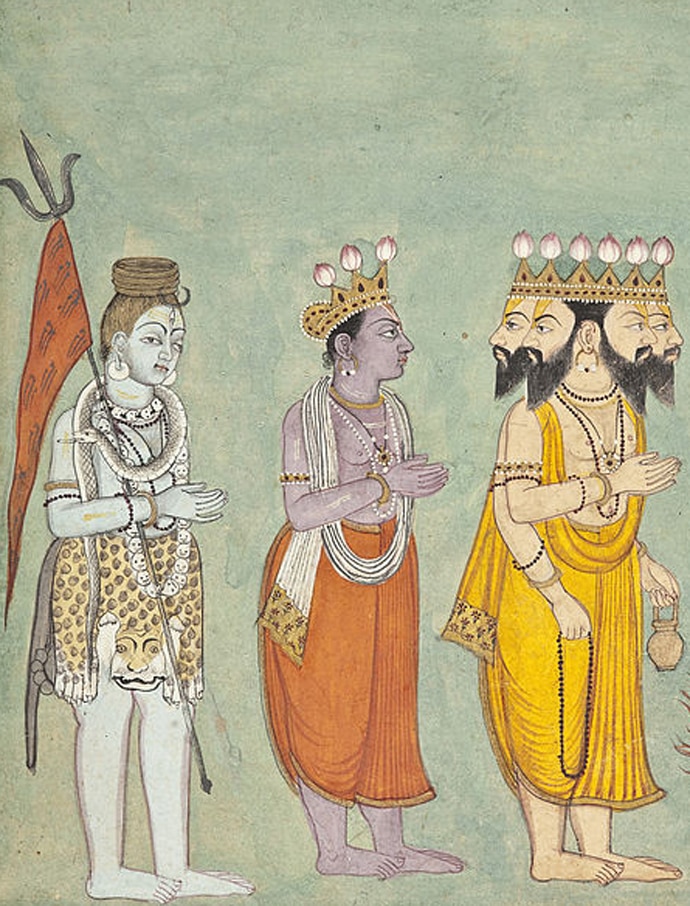 In Tantras, we are told that matter came first as the Goddess, and from her came the mind, taking three male forms: Brahma, the priest; Vishnu, the king; Shiva, the ascetic. (Credit: Wikimedia Commons)

In early Vedic hymns, society is an organism (purusha) created by the coming together of four different kinds of humans: the knowledge-keepers form the head, the land-controllers form the arms, the market-controllers make up the trunk, and service-providers make up the feet. Society is also divided along these lines. So union and separation become key themes.

In later Puranic traditions, when we refer to Brahma as the creator, we are referring to the birth of human culture, through the ritual of culture. Culture goes through four phases of childhood (Krita), youth (Treta), maturity (Dvapara) and old age (Kali) before dying (Pralaya) after which there is rebirth. The death is imagined as a flood, and the only thing that survives is the first human, Manu, and the Vedas, saved by Vishnu. This is a recurring event.

Brahma is also called Prajapati, the father of all living creatures. And so from his mind are created "mind-born" sons, the sages, referring to asexual reproduction. After which come sons who marry women and produce children. Rishi Kashyapa, son of Brahma, marries many women who give birth to different kinds of creatures, according to Puranas. Timi gives birth to fishes, Kadru to snakes and Vinata to birds. But it is never clear where the women come from: are they from Brahma’s body or elsewhere? The Brahma, and all male forms, seem like metaphors for the mind that is planted in matter (represented as women) to create embodied life.

This union of a male and female form, of mind and matter, is a recurring theme in Puranic tradition, especially after the rise of Tantra. Shiva cannot create the world without Shakti; without her, he starves. This world of Shiva and Shakti is nature. In the Gita, this duality is denied. Krishna claims that he is the source of life, that he has two "wombs" (yoni), which are mind and matter. Some people prefer using the word consciousness instead of mind.

What comes first, mind or matter? In the old Vedic hymns, over 3,000 years old, the most famous "creation" hymn is highly sceptical if this question can ever be answered for even the "gods came later". This scepticism is found in Upanishads too, although many attempts are made.

Later, in Tantras, we are told that matter came first as the Goddess, and from her came the mind, taking three male forms: Brahma, the priest; Vishnu, the king; Shiva, the ascetic. Brahma sought control of the Goddess, and was beheaded. Shiva sought to reject the Goddess and was enchanted and turned into husband. Vishnu became caretaker as well as beloved of the Goddess. Brahma’s desire to control the Goddess is given as the reason why he is not worshipped.

However, in the Puranas, mind came first. The world comes into being when Vishnu awakens and from his navel rises a lotus in which sits Brahma who feels alone and afraid. Unaware of his origins, he creates various living creatures from his mind. And assumes he is the creator, another reason why he is not worshipped.

Vishnu worshippers, who became dominant 1,000 years ago, insisted that the world comes into being when Vishnu awakens and ceases to be when Vishnu sleeps. It is he who brings the world out from the bottom of the sea, and enables Lakshmi to be churned out from the ocean of milk. Brahma sits on the lotus that rises from Vishnu's navel.

These myriad ways of looking at creation open up our mind to various possibilities and do not fix it to one way of looking the world. Thus, the dynamic diversity of Hinduism manifests itself oneself once again.

Also read: Why Hanuman Chalisa is the most powerful expression of personal Hinduism