DailyOh! Balam Pichkari for Holi handwashing, to why Trump is no one to give finger-lickin gyaan

Holi 2020 is just a week away but no one is excited because, coronavirus. Get some Balam Pichkari to make your Holi a little better this corona season. Also, why Donald Trump should be the last one to give gyaan on finger licking.

Holi kab hai, kab hai holi? The iconic Gabbar Singh dialogue won't earn you any applause this year. Everyone knows holi kab hai and nobody is excited about it. Narendra Modi and Amit Shah, the two most powerful people in this country, have already declared: No Holi milan because coronavirus 19 has reached our doors. President Ram Nath Kovind has said no to Holi at the Rashtrapati Bhavan because of the same reason. Delhi Chief Minister Arvind Kejriwal is also not celebrating Holi this year, but because of Delhi riots. The number of coronavirus-positive people in India has now gone up to 28, with 16 Italians on that list. Among the first measures to battle this all-new war, we have been asked to avoid all large gatherings. International airports, where people from all over the world land and take off from, is the worst place to be at at this point in time. Add to that festivals like Holi. Now we all love meeting people (we're with you if you don't like meeting people) and greeting them, but for now, put a leash on that.

Most housing societies in the metros have already called off Holi celebrations where the fear of catching this virus is massive. Plus it is anyway flu season. One virus or the other, why risk any of it? Forget about scientists for a while. Even PM Modi is asking you to suspend Holi 2020. But Holi celebrations six years ago got two pilots suspended from duty. Let us tell you why.

On March 17, 2014, on one of their Goa-Bengaluru flights, SpiceJet got its crew to dance to Balam Pichkari 35,000 ft in the air. Most of the passengers on the flight loved this. Some even joined in to dance to the famous Holi song. One of the pilots on the flight was also seen capturing the sequence on his phone. This beautifully choreographed dance routine soon reached the Directorate General of Civil Aviation (DGCA). The DGCA asked SpiceJet how it could endanger the lives of so many passengers this way. It also brought up turbulence, saying that so many people dancing together on the flight could have caused the centre of gravity to shift, and in turn, result in turbulence.

Two SpiceJet pilots on that flight were suspended. SpiceJet said that they put extra people on the flight to make sure the cockpit was manned at all times, but it did not cut any ice with the DGCA. We're sure they learnt their lessons.

As a people, coronavirus is also teaching us a lot of lessons. To begin with, in personal hygiene. Washing hands is just non-negotiable right now and while we know sanitisers have run out in markets, you still have the option of using soap and water. Sing Balam Pichkari while you're at it. By the time you reach "teri malmal ki kurti gulabi ho gayi", you will have kicked those germs away. Here's a quick revision if you forgot that catchy tune:

Now everyone who has tested positive for this novel coronavirus, needs to be in quarantine. What does the word mean? Quarantine, our Word Of The Day, means a state, period, or place of isolation in which people or animals that have arrived from elsewhere or been exposed to infectious or contagious disease are placed. The word is interchangeably used as both verb and noun. So you can be quarantined or in quarantine. Works both ways.

The origin of the word goes back to Italy, which, ironically, has the highest cases of coronavirus outside Asia right now. In the middle ages, ships which arrived in Venice from infected ports, had to sit anchor for 40 days before being allowed to land. These forty days are 'quaranta giorni' in Italian. From there, we arrived at quarantine.

If you're losing sleep over this quarantining business, we suggest don't. It is to keep you safe. And frankly, knowing what this new coronavirus is doing to the world, the best place to be in right now is a quarantine facility where germs are nearly non-existent. But like those 0.01 per cent germs that stay after your hand sanitiser has killed the rest of the 99.9 per cent, nothing is ever foolproof. So we look for best practices and leave the rest to, well, life.

But not Donald Trump. He is not leaving anything to anyone. He went on Twitter a few hours ago to troll American businessman Mike Bloomberg, who is also his Democratic opponent in the US Presidential Primaries. Trump posted a video and asked Bloomberg to not lick his fingers.

Mini Mike, don’t lick your dirty fingers. Both unsanitary and dangerous to others and yourself! pic.twitter.com/LsKLZNeZL9

And that took us to one of Trump's favourite food brands: KFC. Kentucky Fried Chicken. In India and elsewhere, you have seen those words scribbled next to our KFC man: Finger Lickin' Good. Where did the tagline originate?

It was 1956. KFC ran a local advertisement in the US, where their Arizona franchisee Dave Harman was seen licking his fingers in the background. The advertisement got some viewers furious (like Trump, you might say), who called KFC to complain about it. The main actor in that advertisement, a KFC employee, hit back with, "Well, it's finger lickin' good!" 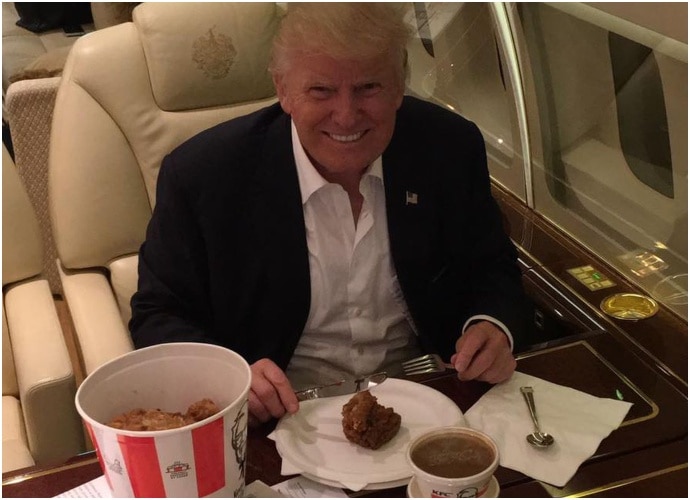 Donald Trump with his favourite finger-lickin'-good fried chicken, but with a fork and knife to go.

It took about four years for KFC to make that slogan reach every household in the US. On billboards as on TV, Colonel Sanders announced, "Finger lickin' good." The trademark expired in 2006. KFC went on to using other phrases, but nothing quite had the impact as finger lickin' good. So in 2015, it went back to using the slogan. It's finger lickin' good, Mike Bloomberg will agree. As will Trump.

From the West, we will now take you to the Far East, where Tokyo is trying to decide what to do with the 2020 Olympics. The city is to host the Summer Olympics this year. The Olympics as of now are scheduled to run from July 24 to August 9. But Japan has suspended the trial competitions because of, yes, coronavirus. Japan's Olympic minister Seiko Hashimoto said that his country's agreement with the International Olympic Council is to have the games in Tokyo in 2020. The games could be postponed. But right now, Japan is not keen on cancelling the Olympics. After all, it is the world's biggest sporting event and is touted to change the course of the host city. People in masks outside the Japan Olympic Museum in Tokyo. Photo: Reuters

Till now, only full-blown world wars have been able to cancel the Olympics. The last time the games were cancelled was in 1944, during World War II. Barbed wires and the thump of the Nazi boots are reminders of that year's cancelled Olympics. London had to let go of the honour of hosting the Olympics in 1944. But when there is a war tearing the world apart, do sporting events matter? In 2020, the world is dealing with a different kind of war. Against the new coronavirus.

While Japan is under lockdown because of this new epidemic, the Olympics website doesn't really show you anything to worry about. The Olympics are known for their resilience in the face of everything but world wars. Even during the last Olympics, in 2016, Rio De Janeiro was reeling from the aftermath of a Zika outbreak. But the game went on. We'll have to see if Japan too goes ahead with the games as planned or tweaks it according to what the scientists say.

But Olympics or no Olympics, life must go on. With that, we say goodbye to you for today.

ALSO READ: DailyOh! Coronavirus makes namaste cool, to the 'dead' guru who had better security than Kapil Mishra got