Why is Holi celebrated more in north India than south India?

Holi is indeed celebrated mostly in north India, not south India. No one knows the reason why. Of course, now with north Indians migrating to south India for work, and due to popularity of Bollywood, many regional festivals are becoming national. Holi is even celebrated in the Caribbean islands by Hindu descendants of indentured labour. It is even celebrated by the diaspora and led to the very popular secular "colour party" in many American universities.

Celebrated on the full moon day of spring, in the month of Phalgun (February-March), like most Hindu festivals, Holi has many layers. There is the Shaivite layer, the Vaishnava layer, and finally the Krishna layer. And it has two parts, the bonfire on the night before and the wild colour festival on the day after. 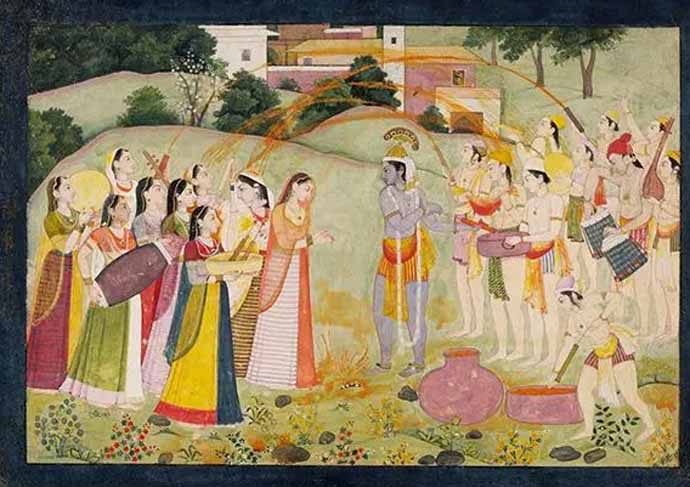 It is said that when Kama died, he was reborn as Krishna, and hence Holi marks the transformation of lust (kama) into love (prema). [Image courtesy: www.vam.ac.uk]

Attention to the Shaivite layer is drawn by the fact that the festival takes place a fortnight after Shivaratri and is also associated with the consumption of the intoxicating bhang (cannabis drink). The bonfire is associated with the burning of Kamadeva, the god of love, who tried to arouse Shiva’s senses and was at the receiving end of the fiery glance of Shiva’s third eye. The next day, however, on the appeal of Kama's wife Rati, Kama was allowed to be reborn, but without a body, hence renamed Ananga. His rebirth is celebrated with colour. Water is poured to douse the passions he arouses. Holika, who had the power to withstand fire, Prahlad and jumped into fire but ended up burning herself while Prahlad escaped unhurt, thanks to the grace of Vishnu. [Image credit: YouTube screengrab]

The Vaishnavaite layer speaks of how Vishnu destroyed those who tortured his devotee Prahlad. Holika, who had the power to withstand fire, hugged him and jumped into fire but ended up burning herself while Prahlad escaped unhurt, thanks to the grace of Vishnu. Thus, the bonfire marks the death of the wicked Holika, after whole the festival is celebrated.

The Krishna layer comes from the Gangetic plain and speaks of how Krishna celebrated this festival with Radha and the gopikas in Vrindavan. They mixed the flowers and leaves of the forest to create coloured water and poured it on each other. The festival does have a strong rural flavour, full of bawdy lyrics, and lacks the sophistication and impersonality associated with urban spaces. It brings out the child in everyone and captures the spirit of Krishna’s love for Radha. This festival captured the imagination of the Mughal kings who patronised it from the 16th century onwards. It was probably introduced by their Rajput queens. Before long, Holi became part of the royal households of north India - across Rajasthan and the hill states, while temples of Krishna celebrated it in Gangetic plains, in Bihar, Assam, Bengal and Odisha. In the Jagannath temple, it became the Dola Poornima, when Krishna and Radha sit on swings and enjoy the spring. It is said that when Kama died, he was reborn as Krishna, and hence Holi marks the transformation of lust (kama) into love (prema).

These practices did not make it to the temple towns of south India, especially Tamil Nadu, where divinity was revered and adored, but never quite seen in intimate terms. Shiva was Dakshinamurti, the august teacher of the Vedas and the Tantras. His antics as Bholenath, the guileless one, were more popular in north than south. So the bonfire on the full moon night, wherever it as celebrated, came to be known as Kamadahana or 'burning of Kama'. Vishnu in the South is the regal Rama and reclining Narayana. As Krishna, he is more popular as a child as in temples of Guruvayur and Udupi. He Krishna is approached more through parental love (vatsalya bhakti), and the anguish of separation (viraha bhakti) than the intimacy of romance (madhurya bhakti). It could be the domination of Hindu monks in social affairs of the south via their mathas (monasteries) that played a key role since the days of Vijayanagara empire may have prohibited public festivals of song, dance and colour, which challenged caste restrictions and Brahmin restraint. This could explain why despite Krishna's popularity, this festival did not become very popular in the south. Places with close links to Konkan and Maharashtra did celebrate Holi and Ranga Panchami (festival of colours) though.

Although a very popular festival, Holi is not quite a pan-Indian festival, and remains a north Indian festival, Bollywood songs notwithstanding. It reminds us that Hinduism is diverse and its customs and beliefs are distributed differently in different parts of India and the world.