The real game of Sacred Games: How to save the career of Saif Ali Khan

From celebrity to celebrity babysitting dad to a sidelined cop on the silver screen, Saif Ali Khan has seen it all. But Sacred Games lets you see him again.

Every time Saif Ali Khan has been able to enchant us in the recent past, he was carrying Taimur. He has been a mere sidekick, facilitating photojournalists to get the best shots of Taimur. Beyond Taimur: After a long time Saif Ali Khan is in the news, and no, not for his children. (Photo: Instagram)

Thankfully, the turban-clad Sartaj Singh, a sidelined cop of the Mumbai Police, pushing his luck the hardest in Netflix’s Sacred Games, is like a fresh breath of air — both to Saif Ali Khan’s career and to the audience, who would have soon started calling Saif 'Taimur’s ka daddy', had Sartaj Singh not happened.

We don’t know whether Sartaj in the Netflix series will be able to save Mumbai - but he has saved Saif Ali Khan’s career for sure. The highly-acclaimed series will come back for a second season, and of course, not without Sartaj. The prominent female characters of the series have been successfully killed in Anurag Kashyap-like gore, but Sartaj is alive and kicking and will lead us through the next season in his trademark style.

The last time we saw Saif Ali Khan, apart from the photos in which the focus was on Taimur, he was Rileen in Kaalakaandi (2018). He was praised in one or two reviews' one or two sentences, while the movie, despite having a promising storyline, could not make a mark. Similar unfortunate things could be said about his earlier movies Chef and Rangoon. His acting was never written off though, but then, neither was it highly praised, excepting a few occasions.

But he was not off the limelight entirely, courtesy Taimur and a slew of brand endorsements in his kitty. Also, he was briefly in the news for the blackbuck poaching case involving Salman Khan and then, daughter Sara’s Bollywood debut which, it seems, has been delayed. 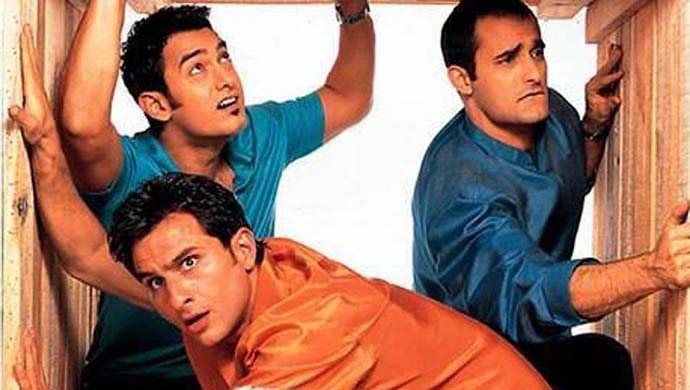 Nothing to do with the nawab’s career, precisely.

It was at this crucial point that we see police officer Sartaj Singh, facing the heat from his department for not succumbing to corruption, being humiliated for being a fat, failed cop who has solved no remarkable case and has nothing to brag about. A broken marriage and a few anti-depressant tablets are all he has.

Saif Ali Khan, in real life, has more to celebrate than Sartaj Singh, of course. Saying It Like Sartaj: No other character could have pushed Saif Ali Khan into prominence like this. (Photo: Netflix)

But somewhere, both their stories merge when we see Sartaj struggling to live up to his father’s reputation, who was also a cop. Even he got a crucial tip-off from his father’s old connection. Saif, too, despite his Bollywood background, and a three-decade-long career marked by movies like Dil Chahta Hai (2001), Kal Ho Naa Ho (2003), Parineeta (2005) and Omkara (2006), is still not considered an A-grade actor like Nawazuddin Siddiqui. (And he's still widely known as 'Chotte Nawab', in the shadow of his famous father, Tiger Pataudi). Gangster Cool: Like Ganesh Gaitonde, Nawazuddin Siddiqui is also at the peak of his career. (Photo: Netflix)

The scenes between Sartaj and Ganesh Gaitonde were actually between Saif Ali Khan and Nawazuddin Siddiqui; a Bollywood old-timer who has been missing in action for long and an outsider who’s ruling the industry now.

Sacred Games doesn’t do much of a favour to Nawaz, who is at the peak of his career today. But there could have been no better bet than Sartaj to resurrect Saif Ali Khan. A character for which Saif Ali Khan reportedly put on weight by eating parathas, a character which does not get swayed when he finally gets his due credit, when he sees his photo on the first page of a newspaper, for he knows success is too fleeting.

Post your comment
#Nawazuddin Siddiqui, #Anurag Kashyap, #Saif Ali Khan, #Sacred Games
The views and opinions expressed in this article are those of the authors and do not necessarily reflect the official policy or position of DailyO.in or the India Today Group. The writers are solely responsible for any claims arising out of the contents of this article.