Virgil Abloh did not follow rules. He created his own

If you knew you were a creative genius, wouldn't you do your best to change the world. This is exactly what Virgil did.

Unlike many architecture students who probably hated attending art history classes in college, Virgil Abloh was an exception. He loved this class. It was inspirational, and quite a creative outlet for someone who had grown up listening to Nirvana rap, Beastie Boys, and Wu Tang. The class had shown him his destiny by inspiring him to choose art as a form of innovation and creative expression. Little did the world know that the young man who had no formal education in designing and fashion (but architecture and engineering), would be a legend that even TIME magazine would recognise.

As Virgil Abloh leaves the world and his millions of fans too soon, here's a look at his trailblazing journey. Virgil was born to Ghanian immigrant parents. His mom was a seamstress and his dad managed a paint company. He went to college to receive two degrees, one in Civil Engineering from the University of Wisconsin, and another in Architecture from the Illinois Institute of Technology. He had no formal education in fashion or designing and learnt the basics of sewing from his mom. Being an architecture student whose professor didn't believe he had a pedigree or ideas or the skillset to work on any important concept, he learnt to thrive off noes. His intuition, genes (and maa ka aashirwad) were his sole strength to create a parallel career in fashion later on in his life. His art went into many directions: solo art exhibitions, streetwear designs, album covers, furniture design, music mixes and high fashion design. 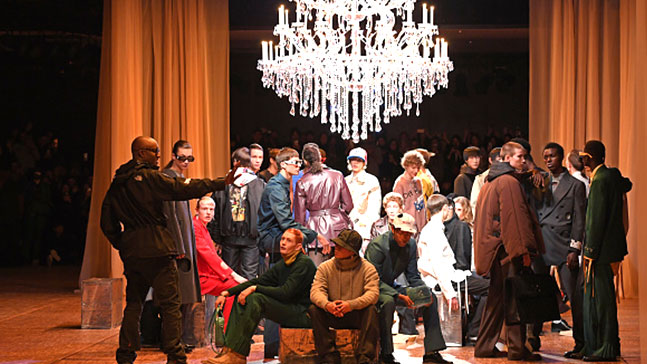 MEETING YE, BEFORE HE DROPPED THE 'KAN'

In 2009, he got a big opportunity in the fashion industry to intern at Fendi and was paid US$ 500 then. With Kanye West (now known as Ye) as a fellow intern buddy, they both used this time period to get experience and connections under the tutelage of Michael Burke, the Chief Executive of Fendi at that time. (PS: remember this guy) After their internship, West hired Virgil to be the creative director of Donda, Kanye’s creative agency. Abloh's main job was to oversee Kanye’s stage design, music videos and packaging design for a long list of albums. West also hired him as the art director of his album collaboration with Jay Z Called Watch The Throne. Abloh was nominated for a Grammy for this creative work of album packaging. He worked with Kanye West for over 10 years while creating album covers for Kanye’s Yeezus and My Beautiful Dark Twisted Fantasy. In 2012, he started his first company, Pyrex Vision Couture Streetwear Boutique. His business involved buying vintage shirts that had never been worn before (also known as dead stock) from Ralph Lauren for US$ 40 a piece. He then added a stream-printed Pyrex vision logo on them and sold them for upto US$ 550 a piece. He closed it after a year of successful operations because he wanted it to be an artistic experiment not a serious business.

Virgil changed the world with Pyrex more than he ever did with Off White and Louis Vuitton imo. I know Taz Arnold, Kanye, and Don C are taking this pretty heavily, and can only imagine.. from the Early 2000’s until now.. Abloh been a genius.. just so sad he’s gone pic.twitter.com/bXd1GNbMBv

He found his second business in 2013, an Italian luxury streetwear fashion label called Off White. The young idea of streetwear (T-shirts and hoodies) was important to him and so was luxury. Also, he wanted streetwear to be produced in the same factory as luxury houses. So he launched his company in Italy, where all big names produced their clothes, even though he stayed in Chicago. 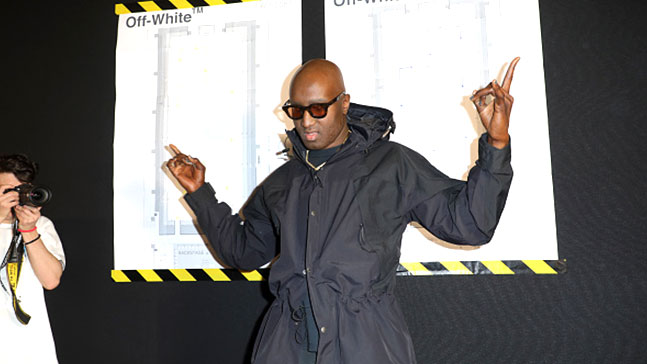 Off White was a space to experiment everything: from graphic T-shirts to creating a modern-day version of Diana's wedding dress, they did it all. It was a place where haute couture met streetwear. This also meant juggling family and work in two countries while work with Kanye continued. He had no desk in the world and was travelling for 320 days a year. He worked as he travelled; on the streets with a phone in hand, and built a luxury brand on social media. 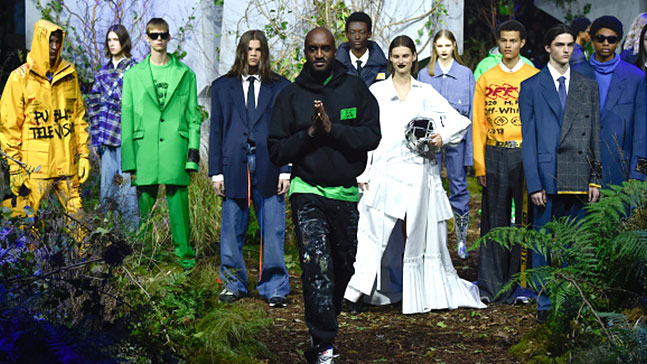 Many years later, Abloh's first boss Michael Burke, who was now the Chief Executive of Louis Vuitton, was looking for someone to fill the position of menswear designer at Louis Vuitton. Having followed Abloh's career from the start, Michael personally chose Abloh for the job. In March 2018, Abloh became the Artistic Director of LV's menswear line and his first line came up in September 2018 at the Paris Fashion Week.

Kanye breaking down in tears after his longtime friend, now late Virgil Abloh, debuted his first menswear collection for Louis Vuitton during Paris Men’s Fashion Week in 2018.It was a phenomenal racial breakthrough as Virgil's renowned creative efforts finally got appreciated. pic.twitter.com/0UOp9rxjfv

Abloh's arrival in 2018 marked the marriage of streetwear and high-end fashion influenced by graffiti art, hip hop and skateboard culture. He also addressed environmental and social issues in his show with anti-racist and anti-homophobia messages, at his January 2021 show in Paris. 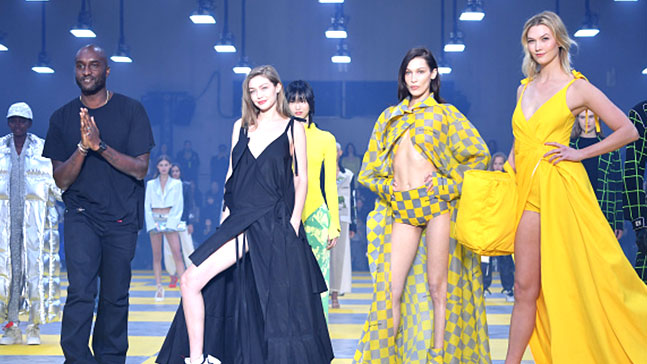 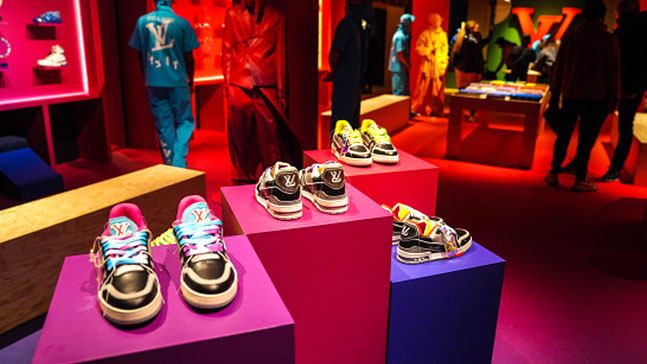 1. He announced a US$ 1 million scholarship fund, an accompanying mentorship programme along with a personal donation (which he raised from his corporate partners), for black college students. He launched 'half reality-half animation' short films as a prequel to Louis Vuitton's fashion presentations, which was widely appreciated.

2. In 2017, Off White collaborated with Nike to redo 10 shoes from Nike's collection which made the sneaker culture a great rage.

In 2017, OFF-WHITE collaborated with Nike on what is now probably the most iconic sneaker collab ever. “The Ten” was Virgil’s take on 10 Nike silhouettes. People loved it. And sneaker culture was blown out of proportion. pic.twitter.com/zS3LUoR5AU

3. He was named as one of the 100 most influential people in the world in 2018 by Time magazine as he was the first black person to be artistic director at a French luxury fashion house. The New York Times called Abloh's bridging of streetwear and luxury clothing 'transformative'.

4. In 2018, he collaborated with Serena Williams and Nike, which created waves like none other. Serena Williams was one of his biggest supporters and wore his designs both at the Met Gala and French Open in 2019. Since he was a celebrity favourite, his work was adored by many stars.

Serena Williams is back at the French Open and debuting her latest Off-White collaboration with creative director Virgil Abloh #RG19 (Reuters/Getty) pic.twitter.com/MfYvV3M5pM

5. In 2020, he collaborated with Jacob Arabo of Jacob & Co to launch a new product: diamond encrusted, 18-carat paperclips. And it wasn't available to everyone. It was only available to those who aced a questionaire application, where he would personally select the customers from case-to-case basis. This was his way of creating a feeling of 'exclusivity' for his cutomers.

.@virgilabloh and Jacob & Co.'s Jacob Arabo will personally be reviewing and approving all orders for their latest "Office Supplies" collection.https://t.co/3Hq5ykMGb6

6. He also redesigned Drake's US$ 185 billion custom private plane. The plane's exterior was sky blue with white clouds, similar to the cover of Drake's album, Nothing was the same.

On November 28, 2021, the world lost this 41-year-old genius to cardiac angiosarcoma, a rare and aggressive cancer he had been silently battling since 2019.

LVMH, Louis Vuitton and Off White are devastated to announce the passing of Virgil Abloh, on Sunday, November 28th, of cancer, which he had been battling privately for several years. pic.twitter.com/CytwZLvSFu

Such an epic journey and such a huge loss.