Laakhon Mein Ek is brilliant, but no genius takedown of IIT coaching nightmare

To have your protagonist — or one of your primary cast members, at the very least — shoot a YouTube video is becoming a very popular device in both Hollywood and Bollywood. The DIY ethos of such an endeavour communicates an "underdog-on-the-rise" vibe that would, in times gone by, have taken up several scenes and dialogues to establish. And so we have Zaira Wasim YouTubing her way to fame in the upcoming film Secret Superstar. A few years ago, Devi Lal (Salman Khan) fighting off goons in Kick was secretly shot and propelled to online fame. The recent Netflix stoner comedy Disjointed features some hilarious scenes that use this device, not least the ones featuring fan favourites Dank and Dabby, uber-stoners and YouTube stars.

Which is why the first scene of Laakhon Mein Ek felt particularly apt — the protagonist Aakash Gupta (Ritwik Sahore, rock-solid with moments of brilliance) is shooting a YouTube video of himself mimicking various Bollywood actors, calling it "Aakash Ki Aawazein" (Aakash's voices). There was a time when YouTubing your own act had novelty value, but now not so much. This chimes well with the show's double-meaning name: "Laakhon Mein Ek" literally means "one in a million"; a remarkable person or thing. But "one in a million" can also refer to the nameless, faceless everyman, lost in a crowd of near-identical peers. And therein lies the crux of the story: when a very specific achievement is being chased by tens of millions of people, including everyone around you, can you still say you're in pursuit of something special? And when you do reach that specific endpoint, can you still say the whole thing was an exercise in free will?

In the world of this show, this specific endpoint is a seat at an IIT (Indian Institute of Technology). Laakhon Mein Ek, an Amazon Prime original, is set at a Vijayawada residential coaching institute (named "Genius Infinity" with straight-faced hyperbole) which feels like a composite of every coaching class horror story you have ever heard. At the beginning of the show, we see Aakash's parents soft-coercing him into joining Genius Infinity, even though he himself is convinced that he has no aptitude for science. Despite his low marks in the Class X board examinations (55 per cent), Aakash's parents are convinced that hard work and sheer will are enough to close the gap, to overcome the odds.

The odds, as Aakash finds out, are enormous. From the day he steps inside Genius Infinity, it is clear that everything is stacked against him. He has been placed in the infamous Section D, allotted to students in lowest bracket of Class X marks. Section D students are stuffed in painfully cramped rooms, they receive the worst food, classroom teaching is virtually non-existent and for the most part, they are left to their own devices. And all this while actually paying more than sections A-C, who receive "scholarships" on account of having higher Class X marks. In this hostile atmosphere, Aakash quickly makes friends with two fellow Section D travellers, Chudail (Alam Khan, delightfully uninhibited) and Bakri (Jay Thakkar, starts off as a caricature but comes into his own nicely). The Genius Infinity racket is steered with an iron fist by Mr Moorthy and his man Friday, Bala.

Once the initial, predictable comedic hijinks are out of the way (these do include some enjoyable tomfoolery, still, courtesy Chudail), the show gets down to what I see as its two big themes: a) Privilege and b) the tyranny of the bourgeois Indian hivemind. 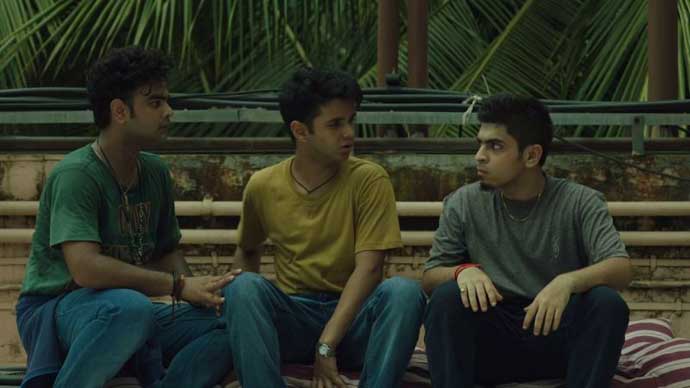 Laakhon Me Ek has been created by Biswa Kalyan Rath, the up-and-coming stand-up comedian who went to an IIT himself.

Let us discuss the latter first. Aakash's parents, the Guptas, are drawn with broad brushstrokes, true. But they remain representative of the salaried middle-class in India. Mr Gupta has a distinctly Nehruvian belief in the indomitable power of hard work and sincerity: he is austere, unrelenting, and uses the moral high ground to power through whenever he senses Aakash resisting his bullying. Mrs Gupta is, well, a somewhat lazily written mother. I would have liked to see her doing something other than conduct pujas and feed her son and try to tone down Mr Gupta's stentorian heat (all well-established Reema Lagoo territory). But within those constraints, she plays her part well.

And now for the P-word: Privilege. Laakhon Mein Ek has been created by Biswa Kalyan Rath, the up-and-coming stand-up comedian who went to an IIT himself; IIT Kharagpur, in fact (in the interests of full disclosure, so did this writer, and at the same time). And although the episodes are directed by Abhishek Sengupta, Rath has co-written the screenplay with Vaspar Dandiwala. In a recent interview, Rath said that one of the starting points of the show was his experience playing school-level sports: specifically, being expected to compete with moneyed CBSE schools while attending a government-run school which had practically no sports equipment, no ground, and no signs of ever improving.

This experience has definitely informed the Section A/Section D dynamic in Laakhon Mein Ek. When Aakash contemplates cheating in order to "jump" from Section D to Section A, we are told that nobody has managed this ever, in all the years that Genius Infinity has seen.

But Section A students are only Section A because they capitalised on their privilege to achieve higher Class X marks. Moreover, most of them have been attending IIT coaching classes since Class VIII, thus earning them a three-year head start on the Section D boys. And when you consider that their spacious living quarters, better food and passionate, involved teachers are effectively being paid for by the Section D parents, you realise what is going on.

This is a pack of hyenas, ripping off the flesh of the poor, offering most of it to the rich, predatory lions as jungle tribute — and gulping down the rest. But even here, Rath and co complicate the narrative further: almost-but-not-quite by accident, we learn that Chandu, the nerdiest, most annoying member of Section A, belongs to an unspecified lower caste, which he admits while being questioned by Bakri, a well-off Brahmin not particularly concerned about his IIT chances.

Suddenly, we see Chandu's supposedly annoying habits in a new light: he has to pursue his studies with single-minded fervour, even when he is humiliated for it by his "cooler" classmates, because the caste privileges that cushion the likes of Bakri are not an option for him. It is a casually brilliant moment, one which Rath and his co-writers should be very happy about.

And yet, this is also where I feel Laakhon Mein Ek should have done a bit more. How does caste feed into the insidious, one-size-fits-all idea of "merit"? How does this "merit" then translate into a convenient catchword that brushes just about any discrimination under the carpet? How do the likes of Bakri et al grow up into IITians treating their Dalit classmates like dirt? Manish Kumar from IIT Roorkee killed himself in 2011.

Madhuri Sale from IIT Kanpur killed herself in 2010. Mallepallu Srikant from IIT Bombay killed himself in 2007. In some of these cases, there were horrific posts by their own classmates that basically said, "We're sorry but this is what happens when you put IIT-level pressure on someone not 'meritorious' enough to deal with it."

In the case of Aniket Ambhore, an IIT Bombay student, his professors had said basically the same thing to his parents, in a letter written shortly before his suicide, suggesting that the Ambhores move their son to a "normal" engineering college.

Scenes featuring a non-Brahmin character's frustration at caste privilege are rare enough for an Indian web series — and I've already praised the show for it — but I can't help but feel that an opportunity was missed here. The Section D story is a much-needed step in the right direction, but why not go whole hog and say it out aloud, D for Dalit? Why not hire Dalit writers and actors to tell their own stories?

To sum up, I will say this, in the interests of fairness: The things I'm asking for are things that zero Indian shows have delivered so far. And therefore, measured in those terms, Laakhon Mein Ek is a success, smartly written, competently shot with a no-frills aesthetic, and brilliantly acted. Which is why it's all the more important that we demand these things of creators like Rath, of relatively new and unencumbered platforms like Amazon Prime.

Who else are we going to demand things from, Chetan Bhagat?