India @ 75: The need for a strong leadership, vision, unity and resolve

With four years to the 75th anniversary of Republic Day, India Today Editor-in-Chief writes about what India has achieved and the agenda needed to fulfil our great potential, in the February 8, 2021 edition of the India Today Magazine.

Over the next four years, India will cross three significant milestones in its history. It will celebrate the 75th anniversary of its Independence in August 2022, and the 75th anniversary of being a Republic in 2025. Sometime in 2024, we are projected to cross China as the planet's most populous country. Therefore, it is as good a time as any to take stock of where we stand as a nation and where we are headed.

The Constitution of India, which was adopted in November 1949, indicated the destination for the young republic-the welfare of all its citizens. The opening sentences of the Preamble resolved to secure for them justice-social, economic and political. 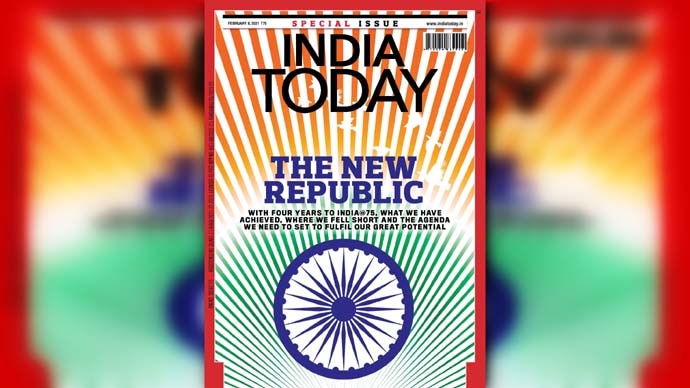 India's road ahead, however, was rocky and uncharted, and the challenges enormous. Close to half its 376 million people were mired in grinding poverty, malnutrition and illiteracy. Despite being a mostly agrarian economy, it could not feed all its people. India's share of world income was just 3.8 per cent in 1951, foreign trade was almost non-existent, and the creaky socialist economy set off on a sluggish 'Hindu rate of growth' of 3.5 per cent that lasted until the early 1990s. Economic liberalisation in 1991, the most significant tectonic shift since the Green Revolution of the 1960s, unleashed the animal spirits that propelled faster economic growth.

Highways and houses are now being built at an unprecedented rate. India now has 5.9 million kilometres of roads and highways, the second-largest network after the US. The 100 million toilets built by 2019 have massively reduced the scourge of open defecation. Together, these achievements have had a massive socio-economic impact. A 2019 UNDP report offers the most recent correlation between economic growth and well-being. Huge improvements in sanitation and nutrition helped India lift 271 million people out of 'multidimensional poverty' between 2006 and 2016.

Faster economic growth is the biggest guarantor for the Preamble's promise of delivering socio-economic justice. We still have an uphill climb-India's per capita income (PCI) of $1,876 (approx. Rs 1.36 lakh) firmly puts it in the lower middle income country bracket. India's PCI is less than a quarter of China's $8,130. At 70 million, we have the world's second-largest population living in extreme poverty (under $1.90 or approx. Rs 139 a day). Only 16.8 per cent, or one in six of India's 191 million rural households, have a functional tap connection that supplies potable water. Seven out of 10 Indians live in rural areas, yet small and marginal farmers earn on an average just Rs 79,779 per annum. Fortunately, agriculture's contribution to India's GDP has come down from 54.4 per cent at the time of Independence to 17 per cent now, but it continues to employ 60 per cent of the population. Moving this continent-sized demographic into more productive livelihoods will be among our biggest challenges in the years to come. As will be fixing the skewed crop pattern that diverts precious government resources towards buying mountains of food that rots in godowns.

Upgrading our congested urban areas, which will house 40 per cent of India's population by 2030, is another imperative. Twenty-one of the world's 30 most polluted cities are in India. In the worst-hit New Delhi, air pollution is shortening life expectancy by an alarming 9.2 years.

We may be winning the battle against Covid, but access to affordable healthcare is the looming war ahead. India has among the world's lowest spend on health, and India's ratio of 0.8 doctors per 1,000 patients is yet to reach the WHO minimum of 1 per 1,000.

Poverty can be reduced only if the economy runs at full throttle and this could be the long-term reward if India follows through on the goal of becoming a $10 trillion economy-the third-largest in the world-by 2030.

The Covid-19 pandemic and the massive economic disruption caused by the lockdown have undoubtedly dealt a setback to these GDP targets. There is a strong case for using this crisis as an inflection point to usher in dramatic policy change and take advantage of a recovery that seems to be around the corner. For instance, the World Bank predicts that India's economy will grow by 11.5 per cent this year and by 6.8 per cent in 2022.

Our special issue, 'The New Republic', compiled by our bureaus, looks at the challenges ahead in the next five years. Our correspondents examined 27 key areas which will deliver well-being to its citizens. These include infrastructure, energy, defence, health, water, labour, environment, law and justice, rural and urban development, women's welfare, scheduled castes and tribes, science and technology, and sports. The challenges are multispectral. They range from boosting installed capacity of electrical power from non-fossil fuels from the 7 per cent it was in 2015 to 40 per cent by 2030, to something as seemingly simple as providing 127 million rural households with piped drinking water by 2024. The government will add 60,000 km of roads over the next year, more than the circumference of the Earth. But it also needs to exit businesses that are best run by the private sector, trim its elephantine bureaucracy and cut red tape.

Fixing other critical government monopolies, like railways and defence, requires a revamp of existing structures. India, for instance, is among the world's top five military spenders. We need to upgrade our dysfunctional military-industrial complex to reduce imports.

Most importantly, to realise our full potential, the government must shed its colonial attitude. Our colonial masters designed the government to control people. We are now a free nation and don't need to be controlled. Instead, we need a government that enables, facilitates and empowers us.

This demands leadership, vision, unity and resolve. On the 75th anniversary of our Republic, we should be the envy of the world-a nation delivering prosperity to all while still being free and democratic.

(India Today Editor-in-Chief's note for the cover story, The New Republic, for February 8, 2021)

#India today magazine, #Economy, #Republic of India, #Indianconstitution
The views and opinions expressed in this article are those of the authors and do not necessarily reflect the official policy or position of DailyO.in or the India Today Group. The writers are solely responsible for any claims arising out of the contents of this article.