Independent, yet feudal - 'India's icons' reveal the mindset that still colonises us

Instead of admiring those who created infrastructure and knowledge for us, we worship only those who represent power. This has dented our Independence, making us callow, even at 71.

In the run-up to the 2014 general elections, Narendra Modi told a New Delhi student audience that he did not appreciate the metaphor of a glass half-full. A glass half-filled with water is also half-filled with air and so is, in fact, always full. His youthful, hopeful and enthusiastic audience gave him a resounding ovation. It was that desperate sense of hope and optimism, and a willingness to see the good side of things, that Mr Modi captured and won the electoral race.

In deploying that metaphor, however, Mr Modi also captured the sentiment of the early post-Independence generation. Jawaharlal Nehru's repeated re-election in the 1950s was due to this sense of optimism and hope of a newly liberated people.

Even when the glass of their material existence was only half-full, the people of India believed in the potential that the other half would get filled, if not with water and food then, at least with the air of freedom. The glass is half-full. Will it ever be fully filled? The people of India still drink in hope. (Source: India Today)

As we move from one Independence Day to another, we have constantly asked ourselves when our glass of development and freedom from want would ever be full. The number of Indians who may be satisfied with the glass-full metaphor may not continue to rise if the country does not deliver on the material front.

All the talk about India being a Great Power, Major Power, Rising Power and Leading Power would remain just that if the country does not deliver on the developmental front. In 2014, Mr Modi was seen by the entire country as the Messiah of Development. He will have to continue to be so if the vision of a New India has to be realised within our lifetime.

This steady improvement in India's economic performance is what has filled half the glass. They pull their weight: Theres been a steady improvement in India's economic performance, thanks to its workers. (Source: Reuters)

There are, however, many fronts on which our achievement has been less impressive and they account for the emptiness of the other half.

Filling it with the hot air of political promise and rhetoric will not do.

The three major lacunae in India's development in the past 70 years have been the neglect of education, manufacturing and technological capability and agrarian transformation. Those who view with awe China's impressive record of development should know that it is built on the foundation of precisely these achievements. The difference is not democracy or communist authoritarianism - it is the gap in investment in agrarian transformation, education for all and the promotion of a globally competitive industry. Indian policy makers do not need too many economists, homegrown or imported, to understand the value of getting the basics right.

If our ambition is to sustain growth on an annual basis of at least 8 per cent per year, widening employment opportunities and building a globally competitive economy, then at the age of 71, we need to go back to the basics.

Education, rural development and a new wave of industrial development hold the key to the construction of a New India — to make the glass truly full. Reaping what we did not sow: Vital investments in agriculture should have been made, 71 years ago. (Source: Reuters)

It is interesting to note that of the first five Bharat Ratnas named, only one was a politician (C Rajagopalachari). Two were prominent educationists (S. Radhakrishnan and Bhagwan Das), and there was a scientist (C V Raman) and an engineer (M Vishweshwaraya). Clearly, India got its icons right immediately after independence.

However, we failed to translate the lofty vision of a nation prioritising education, science and technological development into practical policies. These great icons of nation-building were soon forgotten as we eulogiSed politicians and entertainers.

I was happy to see a news report last week that the Union Minister for Urban Development had decided to name one of the new Delhi Metro stations after the great engineer, M Vishweshwarayya. Sadly, the news report quoted a Cabinet Minister from Karnataka referring to him as a Great Son of Karnataka — Sir Mokshagundam Vishweswarayya was a Great Builder of Modern India.

It has taken New Delhi 71 years to name something after him in the nation's capital.

The fact is, Vishweshwarayya's greatness derived from the fact that he built the largest number of infrastructure projects across the country in the first half of the 20th century. He was among the founders of the Institution of Engineers and was a great nation builder.

How many such nation builders do we celebrate in our public discourse?

A new development-oriented paradigm for a New India must shift the focus of public discourse away from politicians and mere managers of money (our so-called billionaires) to educationists, scientists, engineers and the creators of new technologies, products and ideas.

Consider Asia to our East. Many of those societies have given pride of place to teachers, scientists, engineers and the creators of new knowledge. The transformation of India, from a feudal, wealth and power-based society, to a knowledge-based society is a necessary precondition for building a New India. 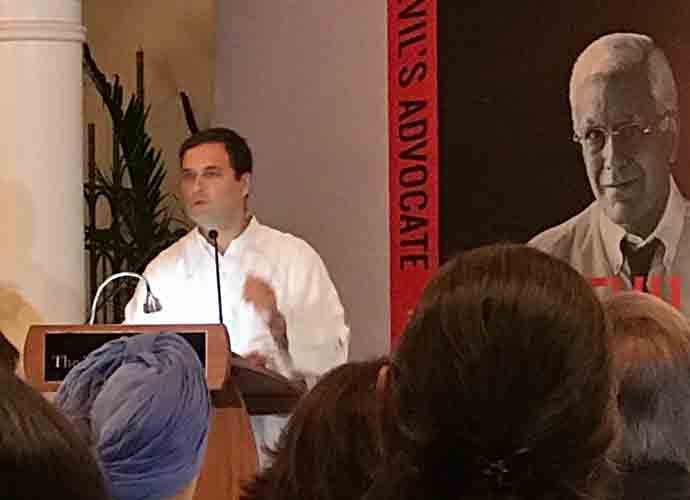 Words of Wisdom? These days, more politicians than academics or writers get invited to book releases. (Source: Twitter)

It has now become commonplace to get politicians to launch books. It's a sad inversion of the idea of a knowledge-based society. He remains the People's President: Our institutions should recall people of real achievement as the norm, not an exception. (Source: India Today)

When more national institutions and public places are named after the Vishweshwarayyas, S Radhakrishnans, C V Ramans, Meghnad Sahas, Vikram Sarabhais, Homi Bhabhas, Abdul Kalams and E Sreedharans of our nation, rather than rulers of the distant or recent past, India's glass would truly be on its way to getting full.

#C rajagopalachari, #Narendra Modi, #India at 71, #Independence day 2018
The views and opinions expressed in this article are those of the authors and do not necessarily reflect the official policy or position of DailyO.in or the India Today Group. The writers are solely responsible for any claims arising out of the contents of this article.