China's new law on land borders has come into effect. It addresses the country's cross-border disputes and its future course of actions. The question is: does it affect India?

There are apprehensions that the standoff between China and India will worsen in the upcoming months given that the neighbouring country is at it again: propaganda, false images, and the whole paraphernalia. On January 1, 2022, China's new land border law for the “protection and exploitation of land border areas” came into effect. This was a bill that was passed by China on October 23, 2021.

In the Galwan Valley near the border with #India, under the characters “Never yield an inch of land,” PLA soldiers send new year greetings to Chinese people on January 1, 2022. pic.twitter.com/NxHwcarWes

Several experts have called out the Global Times video as 'propaganda' and as false.

Interestingly, on December 30, 2021, the Chinese government also renamed 15 places in Arunachal Pradesh; again, a region China claims as its own.

To add to that, China has maintained around 60,000 troops across the Line of Actual Control (LAC) in Eastern Ladakh even during extreme winter. India, on its part, also has a similar number of troops there to ensure that the Chinese side does not think of any misadventure.

In light of these developments comes a new law in China. China shares a 22,457 km land boundary with 14 countries.

So, what is the new law and what implications can it have for India in future? 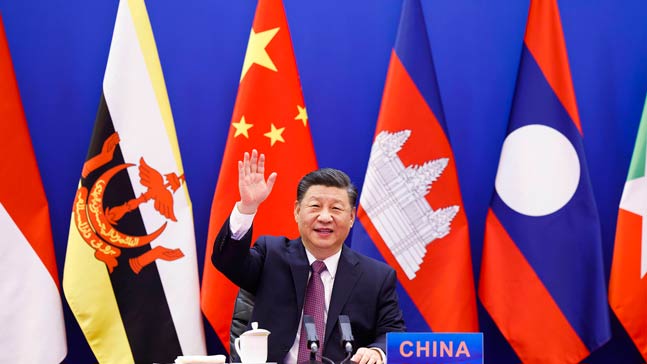 2. HOW IT AFFECTS INDIA

Through the new law, China seems to have authorised aggression in protecting its sovereignty, and for that, India’s cross-border disputes with China are a bit of concern. India and China are at a standoff in Eastern Ladakh and on the issue of Arunachal Pradesh. The deadly Galwan Valley clash on May 5, 2020, that claimed the lives of 20 Indian soldiers and 5 Chinese soldiers, was a result of constant tensions of weeks that culminated into a fight.

The map of China shows the entire area of Arunachal Pradesh, Barahoti Plains in Uttrakhand, and the areas up to the 1959 Claim Line in Ladakh as part of its territory. And according to the new Chinese law, these areas make part of China’s sovereign integrity. The round-table talks between Corps Commanders from India and China might take a turn for the worse due to the new Chinese law. Along Eastern Ladakh and also in Arunachal Pradesh, China's stance seems to be uncompromising. This is also one of the reasons why the China government has been keen on stalling further negotiations with Indian Corps Commanders that seek to disengage its troops from patrolling Point 15 in Hot Springs. The suspicion is that China will use the new law to bolster its existing position at the disputed sites.

4. IMPLICATIONS OF THE NEW LAW IN ARUNACHAL PRADESH

The new Chinese law prohibits construction of permanent infrastructure close to the border without China’s permission. Exactly contrary to what China is preaching, it has been building "well-off border defence villages" across the LAC, especially in Arunachal Pradesh, which its new map claims as its own.

To buttress its claims on the region, President Xi Jinping visited a village in Tibet near the border with Arunachal Pradesh last July. The satellite images procured also show that China has established a number of villages in Arunachal Pradesh, while the land dispute with India remains.

Former Northern Army Commander Lt Gen DS Hooda spoke to Indian Express earlier on this. He said, ”If you [China] start having settled population on the other side, creeping across what we [India] feel is our border, at some stage later, whenever, when you start discussing the border between the two sides, they will say we [China] have settled population in this area.”

While the Sino-India relations are at an all-time low, the opposition has cornered the Indian government for its stance on China. Congress leader Rahul Gandhi targeted Prime Minister Narendra Modi on Twitter over the video tweeted by Global Times.

“Our tricolour looks good at Galwan. We need to answer back to China. Modi ji, break the silence,” Gandhi said on twitter.

With the borders still contentious, no doubt the unfurling of Chinese flag at the Galwan Valley was indeed a provocation to the Indian government from China that they will resort to any methods for their so called territorial integrity. The neighbouring country's new border law will only end up worsening the India-China relationship.

In October 2021, when the new borders law was announced by China, India had hit out at the neighbouring country. Back then, China dismissed India's concerns as 'undue speculation'.

#China new border law, #China new law on border issues, #Xi jinping new law on border issues, #Indiachinarelations
The views and opinions expressed in this article are those of the authors and do not necessarily reflect the official policy or position of DailyO.in or the India Today Group. The writers are solely responsible for any claims arising out of the contents of this article.