Why India-Japan strategic cooperation is growing

The Indo-Japan strategic partnership that has blossomed over the last decade will play a key role in the future geopolitical developments in the region.

On September 9, 2020, the Acquisition and Cross-Servicing Agreement (ACSA) between Japan’s Self-Defence Forces and India’s armed forces was signed by India’s Defence Secretary Ajay Kumar and Satoshi Suzuki, Japanese Ambassador to India, in New Delhi. This agreement is to ensure the reciprocal provision of supplies and services between the defence forces and is expected to drive closer military cooperation and enhance regional security.

On the same day and the next, the Seventh Joint Working Group (JWG) on IT & Electronics / Digital Partnership between the two governments was also held virtually, co-chaired by Rajiv Kumar, Joint Secretary, Ministry of Electronics and IT, and Hirai Hirohide, DG, METI, Japan. The JWG reviewed the progress made under the India-Japan Digital Partnership and had sessions on collaboration in electronic manufacturing, data governance, cybersecurity, software, start-ups and emerging technologies.

All this time, various projects are being implemented under the framework of the India-Japan Special Strategic and Global Partnership programme. 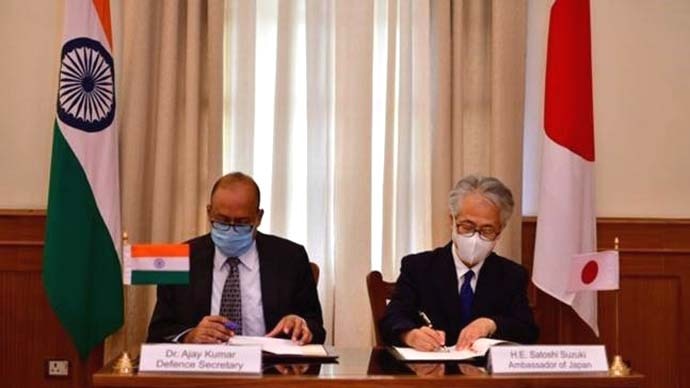 India and Japan were natural allies historically, given the shared cultural history and the ties forged through Buddhism. Yet through the Cold War, the relationship remained chilly. After all, Japan was allied with the United States in a global effort at halting the spread of Communism, while India, post World War II, had tilted towards Soviet Russia. With the fall of the USSR, the US still had to provide a defensive shield to Japan against North Korea and China — two nations with whom Japan has historically unresolved issues, while the Japanese role in the alliance was negligible. The shift back towards closer relationships with India started in the post-Cold War era.

Economic ties between the two nations have blossomed since the economic liberalisation that was ushered in in 1991, with most major Japanese companies setting up offices in the country. As a matter of fact, the first major push for the Indian automobile industry came with the partnership between Suzuki and Maruti, a partnership which was fostered on a governmental level by both nations.

The last two decades have seen very strong support for the Indian start-up space by Japanese conglomerates, most notably Softbank who have invested in many of our unicorn companies. It is worth noting that Japan has pumped in USD 90 billion in building the Metro rail networks in Delhi and Mumbai and is a key partner in the yet-to-be implemented bullet train project. Some of the largest infrastructure projects in India have Japanese participation like the Dedicated Western Freight Corridor or the Delhi Mumbai Industrial Corridor.

The Comprehensive Economic Partnership Agreement signed in 2011 gave a boost to mutual trade by systematically abolishing duties on almost 94 per cent of items. Even in Northeast India, Japan has been investing a lot in infrastructure building projects and last year in December, the protests around the Citizenship Amendment Bill resulted in the cancellation of the India-Japan Prime Minister-level summit to be held in Guwahati. However, this incident hasn’t stopped the Japanese focus on India and earlier this month, Japanese manufacturers have been allowed to claim subsidies if they shift production out of China to India in an expansion of a government programme aimed at diversifying the country's supply chain networks.

However, a major change is being seen on the strategic front where the accelerated partnership has been necessitated by the aggressive stance evinced by China over the last decade. The military-industrial complex in China has been ambitiously gobbling up resources in the region. About a decade ago, China had cornered the world supply of rare Earth metals, pushing up the prices astronomically. It was the Japanese electronics industry that has borne the brunt of this adventurism.

In recent times though, Chinese military ambitions have been growing and coupled with their increasing economic power, China has started building a network of strategic partnerships in Asia that according to observers, reveal their hegemonistic intentions. Under the One Belt One Road Initiative (OBOR), the Chinese have fostered partnerships with multiple nation-states in Asia and Africa, and have effectively tried to isolate both Japanese and Indian influences. At sea, the Chinese Navy has been staking claim to the whole of the South China Sea and has tried to disrupt trade routes that have been operating for centuries. Chinese deceit and aggression even on the borders in Ladakh in India in recent months have added to the concerns that drive more closely the strategic cooperation between India and Japan.

In this context, the growing military partnership that India and Japan have developed is essential towards counteracting the military ambitions of Beijing. India, Japan and the United States have carried out multiple war games in the Pacific Ocean. But now the partnership is moving beyond joint exercises and moving into the area of research into advanced technologies, and jointly developing systems. The growing partnership in the Pacific Ocean is essential at controlling the ambitions of a China that has been projecting power in the region aggressively.

Under Shinzo Abe, Japan's longest serving premier and former Prime Minister, and Indian Prime Minister Narendra Modi, the level of engagement between the two democratic nations, both focused on spreading the seeds of democracy and economic growth around the world, had accelerated. Shaped by his conviction that Japan should assert its strategic role regionally and globally, Abe increased defence spending and strongly pushed for a Japan which could, when necessary, project its military might. His government reinterpreted the constitution to allow Japanese troops to fight abroad for the first time since World War II, as well as revoked a ban on exercising the right to defend a friendly country under attack. In this process, the alliance on a military level between India and Japan has grown stronger as both see in the other a natural ally.

Since last year, India and Japan have worked on a 2+2 mechanism for all strategic meets, which means all summits will be between the foreign and defence ministers of both sides. This is an acknowledgement that the mutual ties between the two nations are militaristic and strategic in nature.

The Indo-Japan strategic partnership has blossomed over the last decade. It is a testament to the mutual understanding and the shared value systems of the two nations. This partnership will play a key role in future geopolitical developments in the region. There is a lot to do together; particularly in the strategic space where Japanese innovation and precision will boost India’s manufacturing sector.

Also Read: Why India-Japan ties never looked brighter than this

#South china sea, #China-japan ties, #India-china clash, #Indiajapanties
The views and opinions expressed in this article are those of the authors and do not necessarily reflect the official policy or position of DailyO.in or the India Today Group. The writers are solely responsible for any claims arising out of the contents of this article.