Karnataka exit poll: Why a win for Congress will change the game for BJP in 2019 Lok Sabha elections

As voting came to a close in the Karnataka Assembly polls on May 12, the numbers, for a change, look stacked in favour of the Congress.

According to India Today-Axis My India exit poll, it's advantage Congress in Karnataka. Yes, the ruling party is likely to win 106-118 seats, with a 39 per cent vote share. While the BJP is projected to get 79-92 seats, JD(S) and allies will get 22-30 seats.

What's more, in as many as 170 seats, it is a straight fight between the BJP and Congress. Voting for 222 of the 224 Assembly seats in the state was held today (May 12) even as elections to Jayanagar and Rajarajeshwari constituencies were earlier postponed.

While election to Jayanagar was postponed following the death of incument BJP legislator BN Vijay, polling in Rajarajeshwari Nagar was stalled to May 28 after a huge cache of Electors Photo Identity Cards (EPIC) was discovered at an apartment. While the BJP is likely to win in Coastal Karnataka, Central Karnataka and Bombay Karnataka Region, Hyderabad, Old Mysore, Bangalore City Region in all likelihood have voted for the Congress. The JD(S), meanwhile, has upper hand in Old Mysore seats. 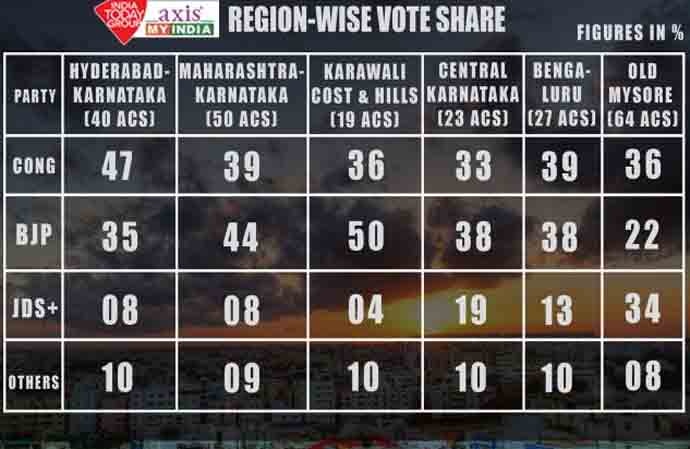 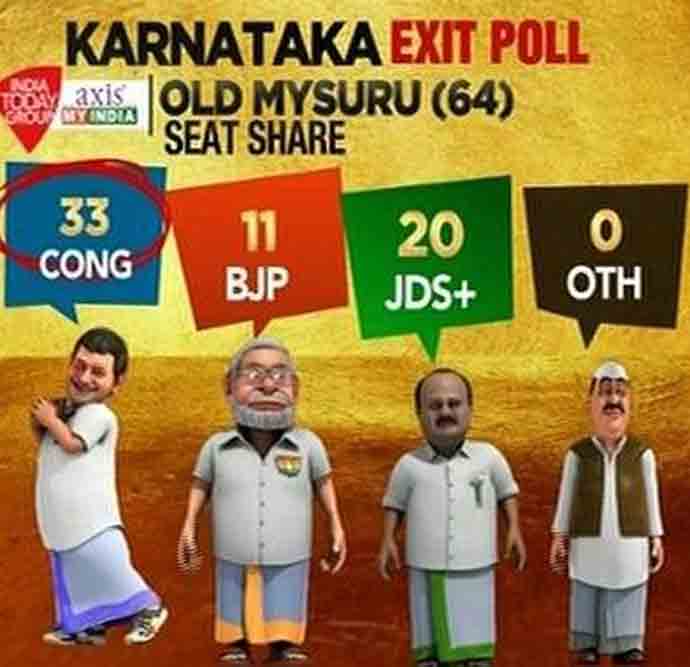 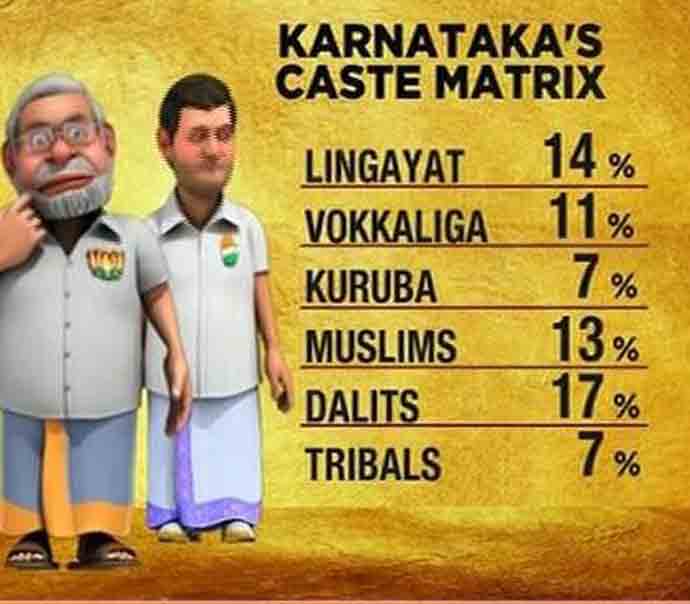 Well, the incumbent CM seems to have won this battle as the exit polls suggest Siddaramaiah enjoys overall popularity in relative terms even as the elections became more of a Siddaramaiah versus Modi, relegating a graft-tainted Yeddyurappa to the background during the campaigning.

Watch #Siddaramaiah LIVE NOW on India Today TV. Listen in to what he has to say on #ExitPollKarnataka - https://t.co/0wzxgAZFPE pic.twitter.com/oqI3NWpBUt

BPL Voters (those with an income below Rs 5,000) clearly prefer Congress – 40 per cent stating their choice as per, compared to just 34 per cent choosing the BJP.

Voters engaged in labour jobs prefer Congress – 44 per cent over only 32 per cent choosing the BJP.

But the BJP has a lead among students – 38 per cent voted BJP compared to 35 per cent for the Congress.

The JD(S) and allies also make a significant appearance among farmers – 26 per cent farmers chose JDS+.

Comparatively, 30 per cent farmers voted for the Congress. And 35 per cent chose the BJP.

Interestingly, the BJP is preferred by 41 per cent retired voters, 36 per cent whom chose the Congress.

The Congress enjoys a clear lead among women voters - 40 per cent chose the Congress compared to just 34 per cent women preferring the BJP.

The tilt is less sharp among male voters, 39 per cent of whom selected the Congress while 36 per cent preferred BJP.

The exit poll, which took a sample size of 51,510, clearly suggests that Congress is emerging as the single-largest party in Karnataka.

Other exit polls beg to differ

While exit poll by Republic TV suggests that BJP will be the single-largest party in Karnataka, News Nation, ABP-CVoter, Dighvijay News and NewsX-CNX also suggest that BJP will emerge as the winner in Karnataka. Also read: Who cares about Karnataka's real issues? No one!