Anushka appeared shy as she walked by her husband's side. But Virat Kohli, radiating confidence, sent a message to all those misogynists who had once trolled his wife.

India won their first ever Test series in Australia after the fourth and final match at the Sydney Cricket Ground ended in a draw following three rain-truncated days.

This is news for those who like and follow cricket — that too, the long format of it. 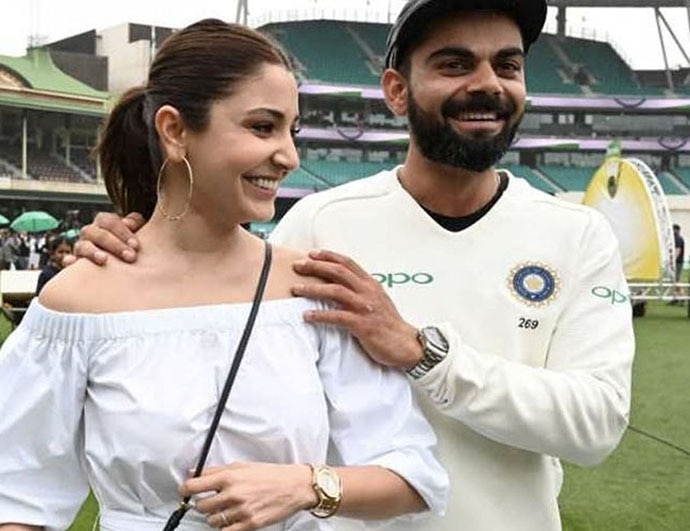 For those who still can’t figure out why a game should be played over five days with lunch and sleep breaks, the victory still came as an occasion to celebrate.

As captain Kohli led the number one-ranked Indian Test team to a 2-1 series win against Australia, he decided to celebrate in style.

Even though the final day of the fourth Test was washed out due to incessant rain and fans missed Kohli's roaring celebration on the field, the skipper more than made up for it with a ‘victory march’ — accompanied by Bollywood superstar and wife Anushka Sharma.

Terming the Test series win in Australia his "biggest achievement" in his career so far, Kohli and coach Ravi Shashtri rated this above India's World Cup win in 2011.

Big wins call for memorable celebrations — and, to that end, Kohli did not disappoint.

He walked over the ground with his hand across Anushka’s shoulders.

Anushka, however, looked a little shy as she took unsure steps along Kohli on the rain-soaked ground.

Viewers of the celebrations were reminded of how Anushka had faced a barrage of trolling whenever the superstar was seen in the stands and team India went on to lose a match. Anushka at that point had been dating Virat.

In 2016, while the couple’s relationship was going through a rough phase, Kohli had melted the hearts of many feminists with a tweet in support of Anushka, saying that she had always given him a lot of positivity.

Shame on people for trolling @AnushkaSharma non-stop. Have some compassion. She has always only given me positivity pic.twitter.com/OBIMA2EZKu

The two have since not just patched up, but also gotten married.

Kohli used the occasion of Team India’s Test win to thus give a cracking reply to all those who have blamed Anushka for his poor performances in the past.

As Anushka beamed her characteristic radiant smile, walking alongside Virat joining Team India in the celebrations, it was the latter who looked in possession of all the confidence the world stores, quite like a star.

Virat sure was performing — for fans and critics — and excelled at the performance.

This is one victory which won’t be forgotten in a long time — neither by cricket enthusiasts, nor by cinema buffs. And nor by romantics at heart, either.

#Anushka Sharma, #Virat Kohli, #Test Series, #India vs Australia
The views and opinions expressed in this article are those of the authors and do not necessarily reflect the official policy or position of DailyO.in or the India Today Group. The writers are solely responsible for any claims arising out of the contents of this article.