The sun was out, but barely visible. "Hum hain Hanuman ke bande," the soldiers shouted as they prepared for a long and arduous trek through waist-deep snow. Gabbar, a mountain dog, who until then was lying motionless on the snow, sprang to attention. And just as the young Army captain ordered the troops to march out, Gabbar too took his position. Like most times, he then led the troops, deftly making his way through the snow-covered mountain track.

Life on the Line of Control (LoC) - the de facto boundary between India and Pakistan - in Jammu and Kashmir's Machhil sector is a test of human endurance. And the past one year has been particularly difficult. While foot patrols along the LoC are a routine, patrolling parties go out every day to make sure the fence along the LoC has not been cut through during night by infiltrating terrorists. 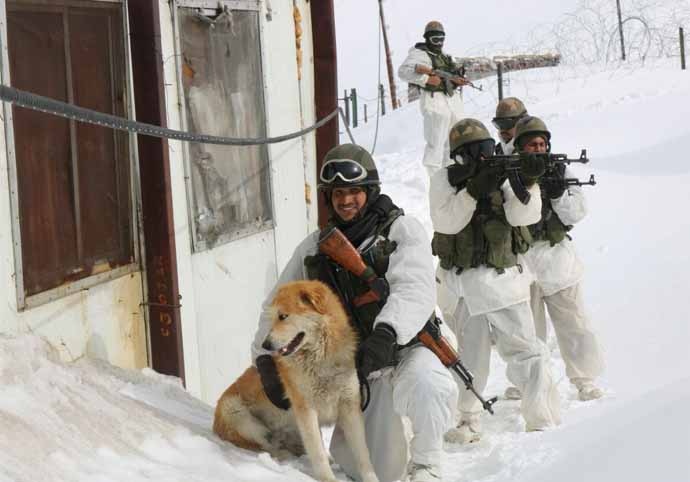 As cameraperson, Tariq Lone, and I tried to keep pace with them, we slipped, tripped and sunk into the snow more often. The patrol party stalled. Gabbar, who was still leading, patiently waited for the soldiers who, in turn, were waiting for us to follow them. “Chalo Gabbar,” said one of them endearingly. In these isolated posts - where the only human company that once can hope for is either that of the infiltrating terrorists or of a Border Action Team (BAT) of the Pakistan Army - the bond between Gabbar and his soldier friends is a testimony of the fact that we (both humans and dogs) are all social animals and need each other’s company.

"There hasn't been much snowfall this year and that’s a big worry," said colonel Sangram Singh Vartak, the commanding officer of the battalion on the LoC.

"The passes are still open," he added pointing towards the ridges that run along the fence. "Open passes are an invitation to terrorist to try cross over to India." This year, none of the positions in the higher reaches have been vacated. “We are still on a summer posture,” colonel Vartak said. The difference between a summer and winter posture for the Army essentially boils down to the number of boots on the ground. As long as the passes are negotiable, the Indian Army needs to guard them. Temperatures here go down well below zero degrees Celsius.

Soon Tariq and I realised that it was futile to try to keep up with the patrol. We slowed down and allowed them to move ahead. Pointing towards a new wire-mesh fence, colonel Vartak said: “The new fence doesn’t get buried when it snows and it's difficult to cut it,” he said. But it is still a long way before the new fence can completely replace the old one. As of now, for these men on the LoC, it is a double whammy either ways: If it snows heavily, the passes become difficult to negotiate, but the fence - the main obstacle to infiltrating terrorist - gets buried under it and one can walk over the snow-covered fence. But if, the fence isn’t under snow, the passes remain open.

As I said, the past year has been particularly violent. With the 2003 ceasefire agreement with Pakistan now existing only on paper, over 868 ceasefire violations have been recorded in 2017-2018 as compared to just 228 the year before, and 152 in 2015-2016. Maintaining the sanctity of the LoC has become more difficult. As many as 32 soldiers were killed along the LoC last year trying to prevent terrorists from infiltrating.

As we trudged through the snow - now about six feet - colonel Vartak pointed towards another spot along the fence. “A terrorist trying to infiltrate was shot here a few days ago,” he said proudly. “We had prior warning. Using the cover of an early morning mist, he tried to sneak in, but our soldiers picked him from a distance.” 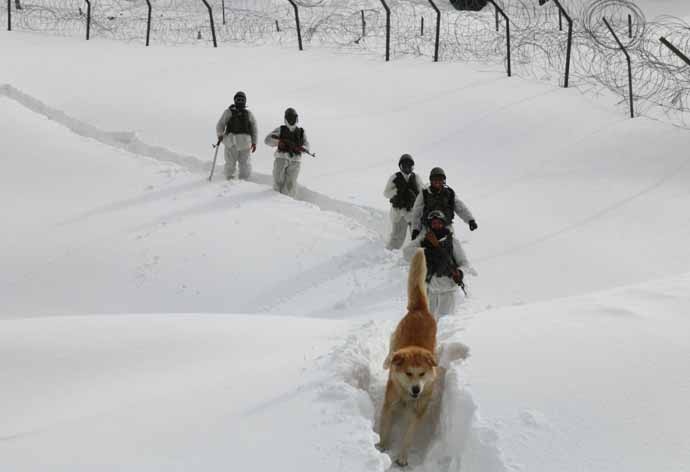 While the colonel went on with his tale, we followed him quietly even though by now we found it almost impossible to continue walking. We finally stopped. The sun had gathered some strength, and from a distance, we could see the merry band of soldiers following Gabbar. Life goes on.