Why are Indians risking their lives to cross into US illegally from Canada?

A family of four from Gujarat, including a 3-year-old child, froze to death at the US-Canada border while trying to cross into the US illegally. It is a story unheard of, but a warning nonetheless.

The success stories of the Indian-American diaspora are like a beam of hope for many back home dreaming to pursue the same. But some trails are better left un-trekked.

Three countries – the US, Canada and India – woke up to a tragic and so-far rare incident on January 21, 2022. The human remains of a family of four, including an infant and a teenager, were found just 30 feet away from the US border on the Canadian side, covered in snow. Red-circled area where the remains of the family were found near US-Canada border. Photo: Royal Canadian Mounted Police

The family members have been identified as Indian nationals hailing from Gujarat. All of them froze to death while trying to cross into the US illegally from Canada, a tragic price they paid trying to achieve a desperate American dream. The temperature at the time of the family’s crossing was estimated to be around -35 degrees Celsius, keeping in mind the wind temperature.

The family of four were reportedly travelling with a group of 15 immigrants, mostly Indian. Along the dangerous trail, the family got separated from the group and were likely caught in a blizzard, which led to their death. The missing family’s case came to light only when the group was caught by US authorities and they found one of them carrying a backpack with baby essentials, without any baby in the group.

Such incidents are little heard of.

INDIANS ILLEGALLY IMMIGRATING TO THE US

According to a 2021 report published by an American think tank, the New American Economy, out of the 10.3 million undocumented immigrants in the US, 5,87,000 were from India; the third-largest share.

Smuggling through the Canadian border is still uncommon, like in the case of the ill-fated Gujarati family. Earlier, thousands of immigrants from India have been apprehended at the tightly controlled US-Mexico border. In 2021, 2,600 Indian nationals were caught by the US authorities at the Mexico border.

The number of illegal immigrants from India caught at the US-Mexico border was large and growing before the pandemic struck. In 2007, the number of Indian detainees, which were 76, went up to more than 7,600 in 2019. Indians have been on the ‘Donkey’ trail for a few years now, trying to find ways into the US. Donkey is known as a method to illegally enter a foreign country via multiple stops in other countries.

In the case of the US-Canadian border crossing of a group of Indians, the Gujarat police is looking into two travel agents, one from North Gujarat and another from Mumbai, who may have facilitated human smuggling of the family of four. They were also said to be in constant touch with the Florida man who has been charged with human smuggling following the discovery of the missing family.

According to a Times of India report, the family had left India just 10 days ago. One of the illegal immigrants caught by the US authorities from the same group had said that he came to Canada on a fake student visa and had intended to visit his uncle, who resides in Chicago.

While the Canada-US crossing is uncommon and dangerous, there are several other dangerous paths into the US adopted by human smugglers and taken up by Indians.

In 2019, a 6-year-old Indian girl died of heatstroke in the Arizona desert while trying to cross the US border from Mexico.

In August 2020, an Indian man was apprehended by US authorities and he admitted walking on the foot for days to cross the US-Canada border.

In the past, illegal immigration worked on tourist visas. When that stopped working, human smugglers flew their clients to Mexico and made them cross the Southern border on foot. Now that US has stepped up border security at the Mexico border, smugglers are making their clients trek through several countries like Panama, Honduras and more to reach Mexico and then US. 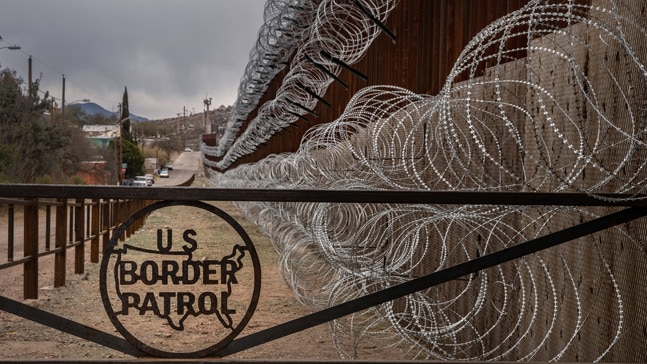 Usually the multi-country trek on foot goes through what is called the ‘Darien Gap’, a region connecting the South and North American continents. But this region is infested with drug mafias, thick jungles, incurable diseases, venomous snakes and wild animals. Reports citing witness accounts have revealed that these trails are sometimes laden with dead bodies from unsuccessful immigrations.

It is likely that as the US has stepped up border security along with Mexico; smugglers are testing the equally dangerous Canadian route.

US-Canada border crossings are rare but not wholly unheard of, and instead of crossing from Canada to the US, it is actually the other way around.

When Donald Trump got elected as US President in 2016, several Americans tried to cross into Canada illegally braving the harsh weather conditions.

During the period, two men lost their fingers to frostbite, a woman died of hypothermia near the border and in 2019, a pregnant woman crossing the border, who went into labour trapped in a snowbank, had to be rescued.

WHY THE DANGEROUS FREEZING PATH? But why would anyone risk their lives trying to cross the frozen tundra between US and Canada during winters? Freezing rivers and other waterways make previously inaccessible paths accessible using snowmobiles. This is why human smugglers make their clients tread the dangerous path during winters.

Among those illegal immigrants who made to the US recently, one is being treated for frostbite, and another, a woman, will potentially have a limb amputated due to frostbite.

The dangerous illegal immigration paths are not for anyone. And smugglers often leave behind the diseased, sick and weak individuals to their own fate along such dangerous trails.