Why social-media admins cannot be penalised for sharing newspaper PDFs

Towards the end of last week, a leading Hindi newspaper and a few lesser-known portals had reported that the Indian Newspaper Society (INS) had warned social media group administrators of legal action for allowing circulation of portable document format (PDF) versions of the newspapers.

There was no press note or tweet from the 80-year-old INS to that regard, for anyone to verify their exact claim in the face of confusion and concern that many people had with such news.

"It is illegal to broadcast PDF copy of newspaper in whatsapp groups, action can be taken on group admin".This news reportedly appeared in Dainik Bhaskar has created quite a discussion and uproar in various whatsapp groups today. 1/n https://t.co/1s3IZ1apS5 pic.twitter.com/s0je0BVwLB

However, the matter has generated a lot of discussion among netizens about the exact legal position, and many social-media group administrators have warned their members against such forwards. A few have also questioned their liability, as they had no control over what the group members were posting.

Yet another set of users questioned the stand of the INS, as many of its member publications were themselves sharing PDF versions of their publications on social media. Some are also wondering if such a move by INS would help when there is peer pressure among its members to retain loyal readership and reach out to newer ones. Some newspapers are offering their newspapers online for free in many formats. Along with all of them, the technical and legal community were confabulating on how it was practically and technically almost futile to stop such forwards on a wider scale.

Needless to say, all this has resulted in confusion during the pandemic and the resulting lockdown, when people are at home and many don’t have the delivery of physical newspapers. The interplay of technology reach, ethical and legal practice, and a larger public good was visible in this case.

At the same time, print publications were seeing another assault from the angle of growing digital consumption habits and the impact on their revenue models, or even survival. The pertinence of this whole dilemma has to be understood from all possible angles. 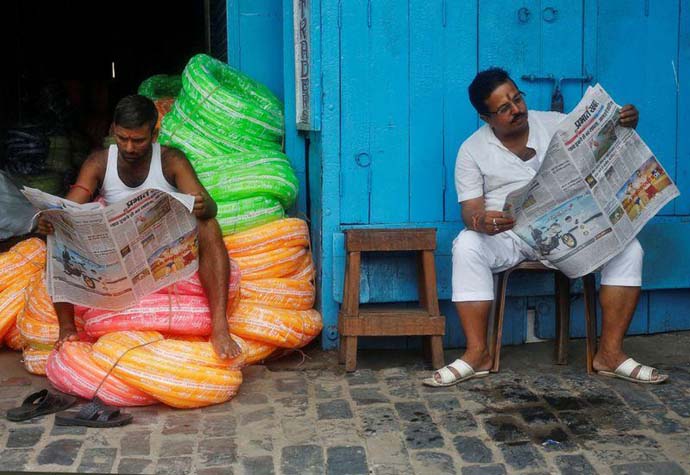 These are the times when people are at home and many don’t have the delivery of physical newspapers. (File photo: Reuters)

Holding social-media group administrators liable for such forwards is not possible, given that they have no control over the content posted by group members. In the two judgments — by the Supreme Court in the R Kalyan vs Janak C Mehta (2008) case and by Delhi High Court in the Ajay Bhalla vs Suresh Chawdhary (2016) case — the liability of the group administrators has been clearly spelt out.

Social media platforms themselves are defined as intermediaries in the context of the Information Technology Act 2008 (IT Act), and their roles and liabilities are limited to being the same. As per Section 79 of the IT Act and the rules notified in April 2011 for these intermediaries, their liability does not arise if they were not responsible for the inception, transmission and reception of content through their networks. However, if a publication house or law enforcement approaches the intermediary to remove the PDF content, they would be bound to do so.

The individual who circulates online such PDFs or a part of it that is not sent to them by the media house, is liable to have committed breaches under Sections 43 and 66B of the IT Act, and a civil case may be made out where compensation can be claimed by the concerned media house.

It has to be the individual publication that has to seek damages, and not the INS, as different members might have different positions on the matter.

Further, it will be next to impossible to weed out all such content generated and circulated. Considering the shelf life of the content in question, it would be practically an ongoing exercise every minute of the day to identify such content and request the intermediaries to remove them, and also take the legal recourse of seeking penalties from such senders.

The publications would not want to lose their goodwill in such an exercise. Also, considering the fact that most publications earn much less from subscriptions as compared to advertisements, it would be prudent to explore a more workable model.

The lockdown and the economic disruption has added to the newspaper industry’s problem of losing revenue to digital advertisers and platforms.

It also brings to focus the changing dimensions of news consumption, with an almost continuous flow of news information. Of course, the intermediaries and group administrators have a role in alerting the users on the healthy practices, and the INS could partner with them in delivering such messages. Meanwhile, many responsible group administrators have already sent out messages of caution to their members.

Also read: Why India needs to protect its print media

#Social Media, #Indian newspaper society, #Newspaper, #E-paperpdf
The views and opinions expressed in this article are those of the authors and do not necessarily reflect the official policy or position of DailyO.in or the India Today Group. The writers are solely responsible for any claims arising out of the contents of this article.