IndiGo staff assaults passenger: Airline must answer why 'whistleblower' employee got the sack

The government has even ordered an inquiry and demanded a report from the airline on the incident.

On October 15, the ground staff of IndiGo airlines at the Delhi airport assaulted Rajiv Katiyal, a passenger who had just disembarked the flight 6E 487, which had landed in the capital from Chennai. After stepping down from Airbus A-320, Katiyal got into a row with some of the ground staffers, who then stopped the man from boarding the bus that would drop passengers off at the terminal. During the scuffle, they manhandled Katiyal, even dragging him on the tarmac.

In a video recording of this entire incident that has recently surfaced, Katiyal can be seen arguing with employees about a delay. The ground staffers can be heard asking him not to use abusive language. And just as Katiyal tries to board the coach, he is roughly pulled back and falls to the ground. Even as he tries to get up, he is pinned down by the staff.

"How dare you... how dare you!" he screamed at the staffers.

Speaking to a television channel, Katiyal said that he was waiting for a bus to take him to the terminal after his plane from Chennai landed when, he claims, an IndiGo employee "shouted at me in a very rude manner".

Things have only gotten worse.

Montu Kalra was an IndiGo employee. It was he who shot the video and even tried to intervene as the situation was getting out of hand. And how is Kalra rewarded for his honesty? IndiGo sacked him for acting as a whistleblower in this incident. The Times of India reported that Kalra’s wife is pregnant and he is desperately in need of employment.

Speaking to a news channel, Kalra said that he was sacked because he had complained about the attitude of his colleagues. "I was sacked without any explanation. How will I take care of my family?" he asked. 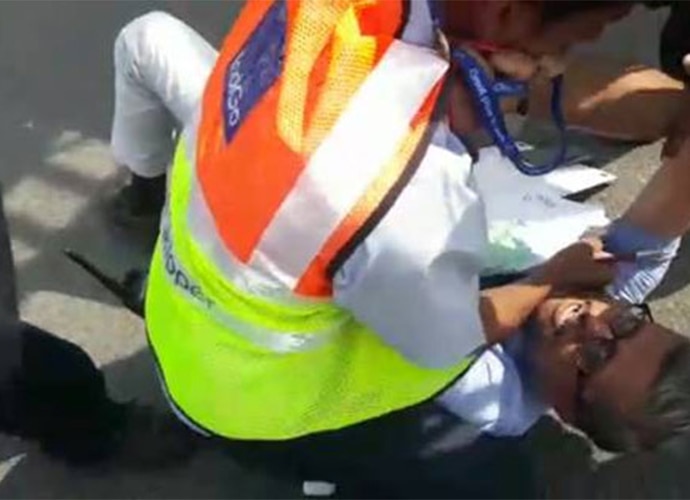 The airline company has issued an apology to Katiyal. IndiGo president Aditya Ghosh said in a statement:

I acknowledge the unpleasant experience our passenger went through, while engaging with our staff at Delhi airport. My personal apology, as this does not reflect our culture. I had personally spoken to the passenger and asked for an apology. At IndiGo, dignity of our passengers and staff is of utmost importance. Any act that compromises the dignity of either is of a serious concern to us. Under the code of conduct violation, this incident was investigated and stern action was taken against the staff. Once again, my personal and sincere apologies to the affected passenger.

Treating our customers with respect is core to what we do. Every day we take tens of thousands of happy customers to where they need to get to. It is for this reason that customers choose IndiGo more number of times than any other airline in the country. An incident happened in Delhi airport which is entirely the opposite of this and against what we stand for at IndiGo. The video of this incident came to our attention and we took action. Even while the investigation was going on we immediately suspended the involved employees. I personally spoke to the customer and apologised to him the very same day. Whatever may have been the provocation, our staff was completely out of line and didn't follow laid down procedures... Under the code of conduct violation, this incident was investigated by the designated committee and stern action was taken against the staff who was the main culprit by immediately terminating his employment. He was the one found instigating and aggravating the situation. He is the exact opposite of what IndiGo's customer service aims to be.

But that apology may have come a little too late. The government has ordered an inquiry and demanded a report from the airline on the incident. Union minister for civil aviation Jayant Sinha said that a detailed report has been sought from IndiGo.

In a series of tweets, Sinha addressed the situation: "IndiGo passenger incident from October 15 is deplorable and unfortunate. Passenger safety and security is our top-most priority. MoCA [Ministry of Civil Aviation] has already asked for a detailed report from Indigo by tomorrow... Indigo senior executives have personally apologised to the passenger. We hope that the passenger will file a criminal complaint. This will enable us to take appropriate action."

According to PTI, civil aviation minister Ashok Gajapathi Raju has also condemned the incident, adding that action will be taken against the airline.

Former Air India chief and present head of the railway board Ashwani Lohani hit out at IndiGo: " The shameful manhandling by two airline [Indigo] employees in beating up a passenger on the tarmac is inhuman, disgusting to say the least and not at all acceptable in a civilised society. The subsequent action of the airline in sacking the whistleblower is the icing on the cake of gross misconduct."

And what about Kalra? We may never know.