DailyOh! On Midwives Day, the story of Panna Dai, who sacrificed her son to save Udai Singh Mewar

So much said about motherly sacrifices, but today is for Dai Mas.

When Greece began its reopening process yesterday, people rushed to salons to ensure they looked well-groomed. We in India chose our highs to stay above Greece and worldly vanities. So high that even a 70 per cent cess on liquor couldn’t pull us down and drag us back to our homes. People stood their ground, quite literally, from 6 in the morning. So what if the vendors at the vends wouldn’t pull up the shutters before 9 am? We are talking of Day 2, which was exactly the same as Day 1 of relaxations kicking in.

#WATCH A man outside a liquor shop in Laxmi Nagar, Delhi says,"I'm here since 6 am. Shop was supposed to open at 9 am but police arrived at 8:55 am...who will be responsible if something untoward happens here? We've no issue with 70% tax, it's like a donation from us to country". pic.twitter.com/xnhycDLL4y

There is nothing like drunk camaraderie. We, however, did not know it extended to buying the drinks too. People stood shoulder to shoulder, tummy to tummy, sweat droplets mixing with sweat droplets – a heady cocktail that has no takers. Social distancing be damned when there is a USD 5 trillion economy to be built, the onus of which lies squarely with those who drink.

Justin : Hum Na manengee!!! This is despite the hike of 70 percent in the cost of all kinds of liquor. Second day of opened liquor store in Chandar Nagar in #Delhi. #Lockdown3 pic.twitter.com/BLa5MSQsi6

Doubt that? Karnataka earned Rs 45 crore on Day 1 by selling liquor. UP a whopping Rs 100 crore. Delhi said voila! That’s the way to go and before people could have passed out, the Arvind Kejriwal administration announced on the night of May 4 a 70 per cent ‘special corona cess’ on each bottle you buy. The government in Delhi then went ahead and increased the Value Added Tax (VAT) on petrol and diesel. Just in case some thought of supplementing liquor with petrol and diesel. Think we are stretching it too far? Well, some did supplement liquor with sanitisers, you see. But that’s besides the point. The point today is cess. It’s also the Word Of The Day.

Cess is a form of tax charged over and above the base tax liability of a taxpayer. Why not call it additional tax then? We aren’t too sure but guess that’s some kind of buffer to the psychological impact of hearing ‘additional tax’. If the government says 70 per cent cess, we say okay. But if the government were to say 70 per cent additional tax on the high taxes already being paid, it might not go down as smoothly with us as the bitter whiskey or the more bitter rum. 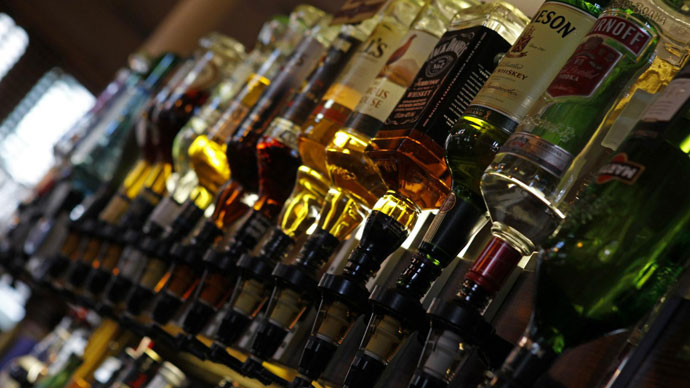 Cess is a nicer way of saying we high taxes are being taken higher. (Photo: Reuters)

The word, however, finds its origin in the late 15th century where it denoted the obligation placed on the Irish to supply the ruler’s household and garrison with provisions at prices ‘assessed’ by the government. It also meant to ‘scold’ so people used to say, “I’ll cess you.” Sounds like a punishment? What else is it? A service. Paying cess on liquor is a service to the nation whose economy is in doldrums. Pulling us out of these doldrums are some dolts. We do not mean to disrespect people paying for liquor because states need money, but we certainly do not need the virus to spread. Those who can’t strike a balance on that are our Covidiots Of The Day.

If this is how they behave sober, we wonder what they would do when drunk. While they enjoy the highs of their drinks, if the infection were to spread (which it most certainly will), it would take everyone down.

So, drink responsibly, but buy even more responsibly. That will help you avoid being a Covidiot but there is nothing that can help you against the cess in Delhi where Arvind Kejriwal has said, “I will cess you.”

Since we are talking about the economy, let us talk some more about it. Luxury sports car maker Ferrari has said it will make US$ 1 billion in core profit this year. We get where Ferrari gets the speed from; but confidence, we aren’t too sure. But we trust Ferrari on what it says. Maybe the company sees demand pick up later in the year. If loaded people can’t fly, they probably will just Ferrari around.

Ferrari’s logo also has a flying connection. In 1923, the founder of Ferrari’s racing division, Scuderia Ferrari, met the Count and Countess Baracca after winning a race. The couple’s son was World War I flying ace Francesco Baracca. Francesco had died in action in 1918. Legend has it that Francesco’s parents suggested that Ferrari adopt their son’s ‘prancing horse’ logo for the Scuderia team. However, it only happened in 1932 when Alfa Romeo, the team that Ferrari raced for then, allowed Ferrari to put the logo on his car. Amid the talk of liquor, Covidiots and economy galloping, okay crawling, back to normalcy, we forgot to tell you that today is the International Midwives' Day. Some thought it was on April 24 because WHO chief Tedros Adhanom Ghebreyesus tweeted ‘Midwives’ out of the blue that day.

Some then suggested it could be because he was high. We aren’t really judging here because there is nothing wrong with responsible drinking. The same can’t be said about drinking and tweeting. But ‘responsible’ isn’t a word we associate with Tedros. Let’s keep that aside for now because this isn’t about Tedros. This is about midwives.

So, today is International Midwives' Day. Now, you know a midwife is a person, typically a woman, trained to assist women in childbirth. May 5 has been dedicated to their services since 1991. But Indian movies had them at the centre of the script much earlier. The Dai Mas who were either the complicit vamps who would swap kids or lie to the mothers, saying their child was a stillborn. There were also those who were the doting motherly women who brought up kids with love and care.

In India, however, no one comes close to Panna Dai. Legend has it that Panna Dai sacrificed her own son to save the child she had helped bring to the world.

Let us tell you about that legend.

Vikramaditya II, the son of Maharana Sangram Singh of Mewar, is believed to have been an ill-tempered and arrogant king. Sangram Singh had died in a battle with Mughal emperor Babur. Sangram Singh's eldest son Ratan Singh II succeeded him on the throne but was killed in battle four years later. Vikramaditya took over the throne of Mewar. Vikramaditya’s youngest brother, Udai, was put in the care of Panna Dai who was also his wet nurse. Panna’s son Chandan was the same age as prince Udai. We told you Vikramaditya was arrogant. The chieftains in his court did not like him and after he misbehaved with an old chieftain, they threw Vikramaditya under palace arrest. A distant cousin of Sangram Singh, Bhanbir, took over as the king of Mewar. He then killed Vikramaditya in his palace to end the possibility of any threat to his rule. Bhanbir then ran with the same blood-soaked sword towards the palace quarters of Panna Dai to kill Udai Singh II.

A maid informed Panna Dai about Bhanvir making his way towards her to kill Udai. Panna Dai had to act quickly. You may think Bhanvir was a slow runner, but remember, these palaces were huge.

Panna Dai, meanwhile, decided she must save the rightful heir to Mewar’s throne. In that bid, Panna Dai put Udai Singh in a fruit basket and her own son Chandan in the bed where Udai Singh was supposed to be sleeping. Bhanvir came and killed Chandan. Having run so long, a huffing and puffing Bhanvir wouldn’t have had the energy for target verification, so Panna Dai managed to save prince Udai.

The rest, as they say, is legend.

They talk so much about motherly sacrifice, but this Dai Ma’s sacrifice is for the International Midwives Day. Bollywood, however, did make a movie on Panna Dai with Ila Arun playing Panna Dai.

It is well over 50 minutes but if you are locked up inside the house, you must have lost sense of time. What’s the difference between 50, 15 or five minutes?

Sacrifices come in many forms – some like Panna Dai to save an heir apparent and some like those braving the heat and dust and police lathis to save the economy. Just kidding.

On that note, we will say bye for today but be back to say hi tomorrow.

Also read: DailyOh! Why all liquor is liquid but all liquid is not liquor

#Covidiot, #Cess, #Liquor shop, #Internationalmidwivesday
The views and opinions expressed in this article are those of the authors and do not necessarily reflect the official policy or position of DailyO.in or the India Today Group. The writers are solely responsible for any claims arising out of the contents of this article.