Yoga is more than just hitting the mat

Its essence really needs to be understood to avail of its real benefits.

The practice of yoga has swept the world with an enthusiasm never seen before. Yoga has achieved the status of a mass cultural phenomena, evident from the fact that there are around 300 million yoga practitioners in the world and it is an 80-billion-dollar market.

To start with, these numbers are indicative of a sudden surge in the business of this ancient philosophical tradition of India. Few of the other ancient arts of world civilisations have survived, sustained and soared to the heights that yoga has.

The credit for this goes to its applicability to every age that the human species has survived. Yoga is one of the rarest of the rare sciences, to have lived through scientific revolutions, technological innovations, and modernisations.

The fact that yoga is recognised and revered in a world progressing towards evidence-based, result-oriented and relational practices makes it a science par excellence.

The prodigious popularity and the overwhelming universal adoption of the Indian discipline demands a special celebratory day to mark the significance of its health benefits (on both mental and physical levels) for common humanity and hence, World Yoga Day has been celebrated annually on June 21, since it was conceived in 2015.

An international day for yoga was announced by the United Nations General Assembly (UNGA) on December 11, 2014.

Prime Minister Narendra Modi suggested the date because it is the longest day of the Northern Hemisphere. It is the day of summer solstice, which marks the journey of the sun towards the south, a period of six months which is most favourable for spiritual practices, according to certain scriptures. 175 nations, including the USA, Canada, and China co-sponsored the resolution of World Yoga Day.

It had the highest number of co-sponsors ever for any UNGA Resolution of its nature.

More recently, Yoga has been associated with incredible health benefits (like weight loss, blood pressure control, cholesterol lowering, cardiac health, diabetes management, metabolism regulation, promotion of flexibility and endurance, muscle strengthening, sight and height improvements, et al) and that has contributed to the sudden love for the routines and physical postural regiments in every part of the world.

Undoubtedly, yoga does serve the purpose of keeping the body in shape as well as balanced, but there is much more to it than just the physical aspect.

Live beyond the mat

It is important to live beyond the mat! Posture-simulated yoga is just a fraction of the 5000-year-old philosophical wisdom which is buried under the huge popularity of the yoga-sticks of the modern world.

The yoga known to the world today is what has been reinvented in the past 150 years by various yogis and markets, keeping in mind the demands of the time.

It is imperative to know the other aspects of yoga in order to understand how it results in physical fitness.

Not just about the sutras

Sage Patanjali is considered to be the father of the yogic system. Patanjali organised the teachings into 196 short aphorisms or sutras known as the "Yoga Sutra" in the second century.

This text describes the path of Raja Yoga, often called "classical yoga". Yoga arrived in the West in the late 1800s and early 1900s, when yoga masters began to travel to the West for the first time, introducing the yogic wisdom and its relation to spiritual attainments.

A special mention goes to the 1893 Parliament of Religions in Chicago, when Indian Philosopher Swami Vivekananda amazed the attendees with his lectures on yoga and the universality of the world's religions, thereby introducing and popularising the heritage of yogic wisdom to the common people of the West.

In contemporary times, the business of yoga is progressing towards style, convenience, and amusement, rather than the classical purpose of spiritual enlightenment with the help of physical balance and control.

Today, there are some very strange forms and derivations of Yoga practised in various fanciful studios, such as the Co-Ed Completely Nude Vinyasa Yoga (practice yoga in nude), Hot Yoga (studios are heated to 105 degrees Fahrenheit and 40 per cent humidity), dogs (doing yoga while holding your dog in various positions), Yoga (yoga with "vogueing," or dancing/enjoying popular music), Snowga (yoga in the snow), and Laughter Yoga, to name a few.

These techniques are inventions for making yoga fit your preferences of workout style, but they lack the very attitude and spirit of the science which was predominantly devised for spiritual empowerment in its inception.

Spirituality is one of the most fundamental aspects of yoga and this aspect has been overshadowed by the progression of the physical aspect of yoga.

Volumes of texts on yoga sutras provide an insight into millions of questions about human sense and sensibilities, human sufferings and human connectedness to the world. 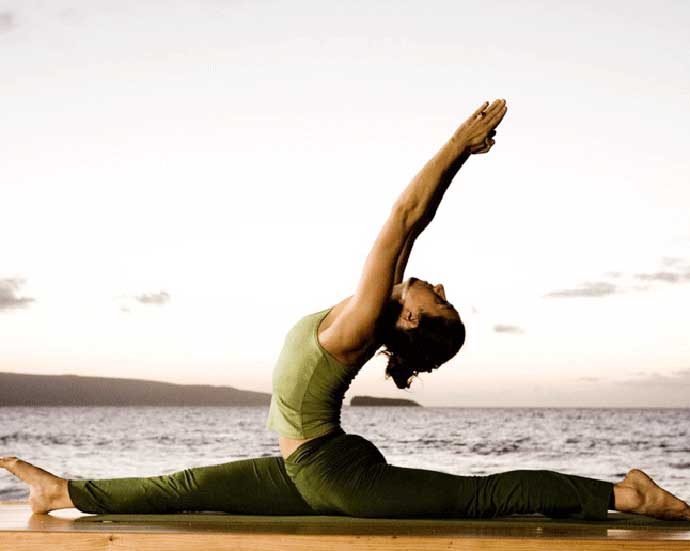 Yoga philosophy incorporates the senses, the intellect, the ego and the body into one whole reality.

From wisdom about coping with the stress of everyday life to attaining emancipation from worldly desires and attaining the highest form of spiritual self by following various paths recommended by yoga, this humongous science has so much to offer.

According to a popular legend, a renowned sage named Vyasa once sent his son Shuka, a perfect being in every sense, to King Janaka.

Janaka was a great king and was called "Janaka Videha" which means "without a body".

Although a king, he had entirely forgotten that he had a body; he felt that he was a spirit all the time.

When Shuka arrived at the palace, no one noticed him and he was treated like an ordinary insignificant being who received no attention, even being the son of one of the most-renowned sages.

The guards made him sit for three days and nights without speaking with him or serving him.

The next day was a game changer when suddenly, Shuka was bestowed with the best honours and treats, adorned with perfumes and accessories, along with other royal luxuries.

Having lived for a few days in extreme pleasure, Shuka was brought to King Janaka for the first time. The king asked Shuka to hold a full cup of milk and walk seven times around the hall without spilling a drop.

While Shuka walked the hall, he met beautiful women dancing, playful music and beautiful arts, but Shuka remained unaffected and walked impeccably with the milk, not dropping any.

When he brought the milk back to the king, he said: "What your father has taught you, and what you have learned yourself, I can only repeat. You have known the Truth; go home."

This is the spirit of yoga!

Our contemporary times and troubles are overwhelming in a way that taking care of the body but neglecting the spirit does not work in favour of balanced living. When once asked, "What is misery?"

Vivekananda answered: "To every action, there is an equal reaction. If a man strikes me and wounds me, it is that man's actions and my body's reaction. Suppose I have so much power over the body that I can resist even that automatic action."

Can such power be attained? The ancient Indian philosophy says "yes you can".

"However If you stumble on [it], it is a miracle. If you learn it scientifically, it is Yoga."

Yoga philosophy incorporates the senses, the intellect, the ego and the body into one whole reality. It suggests that our misery and our happiness are our own productions.

No situation is either good or bad, but our reaction makes it so.

Everything is in the senses. It is the touch of the senses that creates pleasure or pain. If we can control our senses and order what we shall feel, without letting them control and have command over us, if they become our servants, then the problem is solved.

Our senses make us experience the world and mastery over them is the key to successful living, which can happen with mindfulness attained by yoga.

This leads you to gain the union with your own self. You are not the body, but the universal soul! You learn to control, rather than being controlled, and this is the magic of the science of yoga.

Make you mind your means to salvation by attaining freedom from being affected by the life conditions which are neutral in themselves.

#International Yoga Day, #Health, #Yoga
The views and opinions expressed in this article are those of the authors and do not necessarily reflect the official policy or position of DailyO.in or the India Today Group. The writers are solely responsible for any claims arising out of the contents of this article.