Isha Ambani's pre-wedding bash: 10 things we have never seen before

Mumbai was silent for a day.

From black umbrellas covering the bride and the groom from the rest of the world to a 75-feet long wedding veil — just the moment we thought we've seen all and sundry of this year’s wedding season, there was divine intervention! Enter the wedding (a pre-wedding bash) of all weddings, and we witnessed (on social media) things of which our remotest dreams are sometimes made.

Yes, we are talking about the pre-wedding bash of Isha Ambani-Anand Piramal held in Udaipur.

The air, water, roads of Udaipur were buzzing with activity, while Mumbai felt silent for a day. But it was just a little lull for Mumbai ahead of the wedding on December 12.

Now, we all know the number of choppers ferrying guests, or the Anna Seva, or the Swadesh Bazaar, or Manish Malhotra’s fashion walk.

Let’s talk about something unusual:

1. Salman Khan doing an SRK number — as a background dancer

We all know how Bhai rules the industry. Scripts, songs, sequences are tailored for him, while every co-star (of course, for their lack of screen presence) is pushed to the periphery. That’s how things have been since time immemorial. But yesterday, we saw Salman dancing to the tune of SRK’s ‘Koi Mil Gaya’ (KKHH), and that too, in the background, and he seemed happy about it.

2. A Perfect Hymn for the weekend

#Beyonce turns up the heat at #IshaAmbani and #AnandPiramal’s pre-wedding celebrations. pic.twitter.com/HtjtGAmJLV

We have seen Beyoncé in Indian clothes, in fact, in Abu Jani Sandeep Khosla attire only, in ColdPlay’s Hymn for the Weekend video. The music video drew flak over the culture appropriation debate and Beyoncé was actually criticised for wearing Indian clothes and jewellery.

This time, there was no debate. Beyoncé set the ‘weekend’ stage on fire as she performed Ed Sheeran’s Perfect among many other numbers. 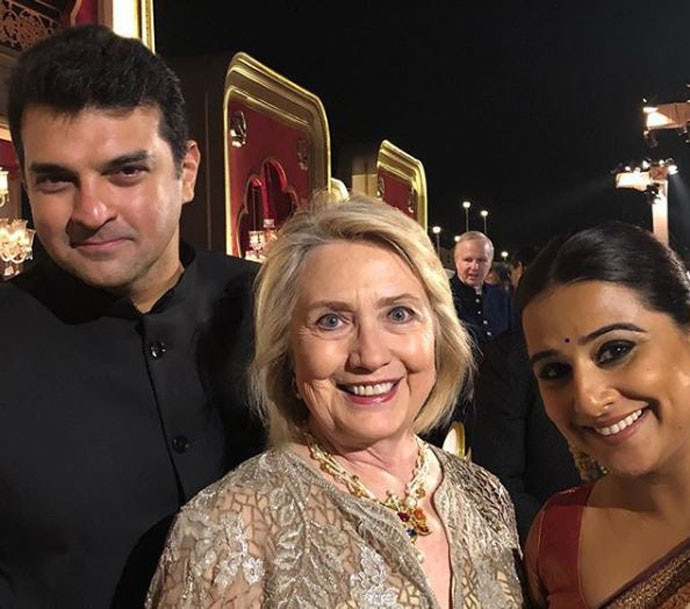 When everyone in a gathering is a star, who fangirls/fanboys whom? This must be a million-dollar question. But we have an answer. Apparently for the first time in her life, Vidya Balan asked Smriti Irani to introduce her to former US secretary of state Hillary Clinton, who reportedly was dancing along with the Ambanis.

“I felt hopeful while she campaigned to be President and felt a certain hopelessness when she didn’t make it,” wrote Vidya on a social media post.

4. Are these costumes? Or, storybooks? Beyoncé wore a bejwelled swimsuit featuring over 850 crystals along with 150 elephant-sized pearls and tribal beads. The sleeves were crafted in 800 strands of hand-sewn black Raffia. Her Indian dress was a caped red-and gold gown with gold flats. Stylist Marni Senofonte chose the headpiece, earrings and hand jewelery to go with the swimsuit.

5. SRK not ready with a speech Nothing seemed choreographed. Just a bunch of celebrities having a good time. (Photo: Twitter/Filmfare)

SRK is a person who is never at his wit’s end. He is always ready with something very appropriate to say at any social gathering. But in one of the videos, we saw him saying that he had a speech ready with him — with all good things written down. But he was not feeling like reading that as everything around him was so spontaneous. His dance with Gauri too was.

Aishwarya and Abhishek are mostly seen together flying in and out of assorted airports, or at Aradhya’s birthday party.

We saw them dancing together after a long time — though Aishwarya was dancing alone — as the hit number from their Guru was being played.

Abhishek Bachchan was doing what he does the best — being comfortable in all kind of awkwardness (this, we have seen a lot of).

Karan Johar is a brilliant director, producer and anchor.

But he is a marvelous and uninhibited dancer too.

We came to know about this hidden talent yesterday.

8. How were Ranveer and Nick Feeling? We hope Nick was not feeling low! (Photo: Twitter)

For every newly married couple, the first few social appearances together matter a lot.

A lot of eyes follow them, their outfits, their body language, their smiling at each others’ jokes et al.

So, we can understand how Ranveer and Nick were feeling. While Ranveer danced crazily, we just hope Nick was not feeling low, realising what the same Rajasthan can do to different weddings.

9. No photos of politicians, businesspersons — and Taimur

We are sure a number of politicians attended the two-day Udaipur fete. But we can't see any of their photos. A number of global business tycoons were also present, but it's clear that Bollywood steals the show — and that too without Taimur.

We don't even know whether he was there.

The kids (actual kids, not talking about star kids) were there in Mumbai. Many were attending the birthday bash of Rani Mukerjee's daughter as well.

But the buzz is that as all the actors were in Udaipur, Akshay Kumar and Ajay Devgn have meanwhile signed all the films available!