Judging Ivanka Trump by her poise and dress sense

All the attention at the Global Entrepreneurship Summit 2017 currently on in Hyderabad is on Ivanka Trump, adviser at White House, and more importantly the daughter of President Donald Trump, who is heading the US delegation to India.

She is an enviable creature, picture-perfect to look at, impeccably groomed, mother of three kids, power broker, deal-maker and takes her chair comfortably at international summits. Occasionally, the chair of the POTUS too. But she's not merely a placeholder. She was instrumental in leading the presidential campaign that got Donald Trump into the White House. She's in fact, considered more of his political spouse than his daughter, considering that she's much more visible publicly than the president's reticent spouse Melania Trump.

She also is a businesswoman with a jewellery line launched in 2007 growing to become a brand with shoes, handbags, clothes and accessories. Power woman? She's the definition of the term. And she's consistently dressed the part. Soft pastels, delicate pinks, beiges, ecrus, camels, whites, rich luxurious fabrics, fitted sheath dresses, sharply tailored suits and floral dresses. Her clothing choices have always been a careful mix of the works of established designers such as Carolina Herrera, Oscar de la Renta as well as those of the upcoming ones. She is often seen in clothes from her own eponymous line as well.

As she arrived in India straight under the blinding flash of the photographers, not a single strand of her blonde hair out of place, make-up immaculate, she was not dressed in the power suit or the pastel dress one expected, but rather in a pair of black trousers paired with a black jacket, liberally encrusted with embroidery.

Her choice of pantsuit is interesting especially given that the pantsuit was a sartorial choice that Hillary Clinton had made her own during the presidential elections she eventually lost to Donald Trump. The look was quite a departure from what one has seen of her. Gone were the pinks and the pastels that formed a predominant part of her wardrobe. The choice of trousers and a black embroidered blazer was interesting enough.

You know, modesty, and no legs showing in a country where we can get millions of self-appointed "fashion police" frothing at their collective mouths over an actress daring to wear a dress to a meeting with the Prime Minister, or at yet another actress posting a picture of herself in a swimming costume, or worse, at a proud husband and a cricketer posting a lovely family picture of himself with his wife and daughter, one in which his wife bares her arm.

Perhaps Ivanka wanted to play it safe here, a look that would be all covered up and unlikely to offend any "easily offendable" sensitivities. And perhaps she also wanted to throw in an element of the exotic, evident in the white-detailed embroidery on the boxy black blazer she sported. 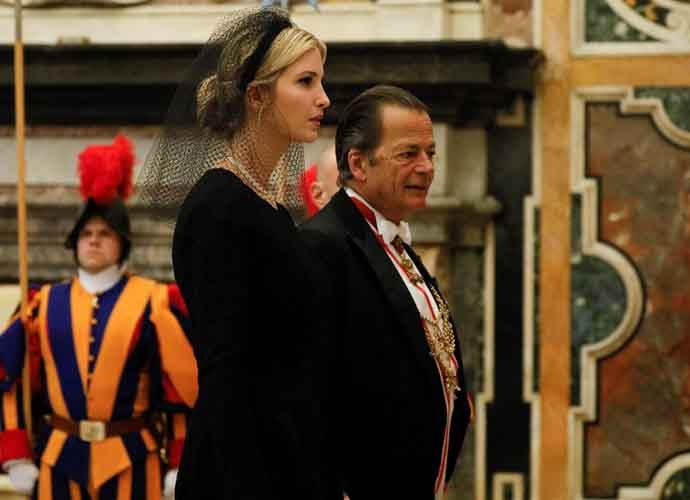 Women in politics have always made their looks part of their personal branding. Much like Hillary owned the pantsuit, and Baroness Thatcher owned the power suit and the pearls, Ivanka has been known for her penchant for millennial pinks and soft-hued dresses.

There's no doubt that ever since she became the first daughter, so to speak, Ivanka Trump has upped her dressing game by many notches. Her public appearances have always been impeccable. And she has consistently adapted her sartorial choices to the place of visit.

On a trip to the Vatican City to call upon the Pope, her outfit of choice was a sober black lace dress with a black veil. When in Tokyo for the World Assembly for Women, she chose a kimono-inspired dress for a dinner at a restaurant hosted by Japanese President Shinzo Abe.

The dress, made in Italy by Columbian designer Johanna Ortiz, was a lovely pastel shade with a floral poppy print and a black obi belt, and was an interpretation of the traditional Japanese Kimono. In Israel, she wore a sombre black outfit, keeping with the strict dress code of the Jewish faith and wore a mid-calf-length skirt and a long-sleeve top with a high neckline, her head was covered with a fascinator, her feet shod in plain black pumps. In Saudi Arabia, she sported a long full-sleeve modest dress with a floral print, though she went without a headscarf. In India too, she opted for the safe modesty of the full black pantsuit, enlivened by the all-over design that the jacket sported. But the look was definitely that of a power woman.

The black trouser suit she chose for her first public appearance in India is interesting. Also interesting is the softer silhouette of the full-sleeve dark floral print dress she wore later to the Hyderabad International Convention Centre for the keynote address she was scheduled to deliver.

Both outfits are sartorial statements of two different silhouettes. The first boxy and masculine, made feminine by the detailing of the work on the jacket. The second fitted yet not immodestly so, a longer length, full-sleeve and floral. Both are choices that assert her individual style. A style that focuses on comfort and is careful not to offend.

Post your comment
#Melania Trump, #Donald Trump, #Global Entrepreneurship Summit 2017, #Ivanka Trump
The views and opinions expressed in this article are those of the authors and do not necessarily reflect the official policy or position of DailyO.in or the India Today Group. The writers are solely responsible for any claims arising out of the contents of this article.