Coronavirus: Why is the Jammu & Kashmir government defying Modi's mantra?

Kashmir is not a normal region and coronavirus is no joke.

A mere act of sneezing or coughing sounds scary nowadays. With the World Health Organization (WHO) having declared the deadly coronavirus pandemic, this invisible-beast has emerged as one of the biggest threats to humanity.

Like every other country, India is not immune to the novel virus, which is named for the crown-like spikes that protrude from its surface.

To fight the outbreak, Prime Minister Narendra Modi has been proactive, time and again pronouncing his words of wisdom — urging the countrymen not to panic, but remain vigilant. He reiterated this mantra at the special meeting of the SAARC nations, held through video conference on March 15 to chalk out joint strategy in combating the virus that has killed over 7,000 people and counting, worldwide. 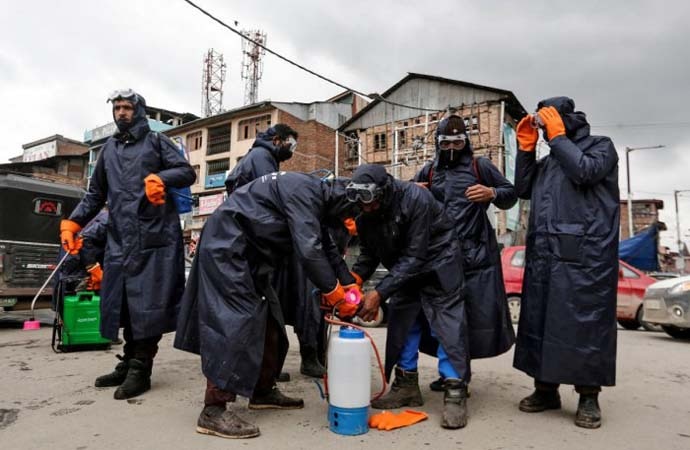 But then, while the central government has been on alert, the arrangements being put in place by the Jammu and Kashmir government seem to be defying the very essence of the Modi mantra. In the world’s largest democracy, where citizens hold the key to governance, the J&K government has banned public entry into Civil Secretariat that houses the offices of the top bureaucrats, especially the Chief Secretary.

On March 16, the government issued a handout stating that the ban was ordered at a meeting chaired by Chief Secretary BVR Subrahmanyam. “In view of detection of two confirmed, (possibly three) coronavirus cases in Jammu and measures put in place by the Health Department to tackle the threat of its local transmission, it was decided that public entry in Civil Secretariat and all HoD level offices in Jammu Division will remain ceased till March 31, 2020, as a precautionary measure,” the official communication read.

Is it a “precautionary measure” or panic on the part of the Chief Secretary that he wants to keep people away?

India is essentially a people-centric country, where the ongoing Parliament session has remained undeterred by the coronavirus fears. Even the Prime Minister and Home Minister Amit Shah have not given up meeting people. They keep meeting delegations — even from Kashmir. So, why should any top-ranking government official shut his office doors for people? And, what message shall it convey?

Is the life of a Chief Secretary, his council of Secretaries or HoDs, more precious than that of our Prime Minister? What about the policemen, who maintain vigil across the country at places including high-risk airports and hospitals? What about Jawans, who stand guard for the nation, without banning any public movement? What about doctors, paramedics or even every common man, whose routine work also contributes to nation-building?

Though coronavirus is not supposed to be a comical affair, the J&K government’s preparedness reminds me of the popular yesteryear comedian late Jaspal Bhatti.

Participants during the Khelo India Winter Games at Gulmarg in Kashmir on March 7, 2020. (Photo: Twitter/ @kheloindia)

The five-day event witnessed the participation of more than 900 sportspersons from various parts of the country. Interestingly, advisory on coronavirus for hotels in Gulmarg came only a day after the event had concluded. “All the hoteliers of sub-Division Gulmarg are directed to ensure implementation of the advisory /directions issued under integrated disease surveillance Programme (IDST) by the National Centre for Disease Control,” reads the order issued by the Sub-Divisional Magistrate Gulmarg, on March 13. A day later, on March 14, the J&K government suspended “Nodal Officer for coronavirus efforts”, Dr Shafqat Khan, for “dereliction of duties.”

If media reports are to be believed, the erring official had been placed under suspension at least twice in the past. So, why was a man of such questionable credentials given such a sensitive charge in the first place?

Further, there seems to be no centralised mechanism in place. Unlike Kerala, which is being appreciated for the single line administration in tackling the outbreak, in J&K every District Commissioner has been making individual announcements based on his or her whims on the dos and don’ts for the people.

Being a conflict-zone, Kashmir is just not like any other place in the country and thus, the governance is supposed to be equally extraordinary, on every front.

Modi, who has coined the vision of Naya Kashmir, knows it quite well. Perhaps, this was one of the main reasons behind the appointment of one of his most trusted lieutenants, Girish Chandra Murmu, as the first Lieutenant Governor of the newly-created Union Territory.

Known for his administrative competence and integrity, Murmu, a former bureaucrat, is seen as Modi’s best bet. But in a country where the PM is very active and approachable on social media, J&K’s first LG is yet to have his own Twitter handle.

Murmu comes with the experience of being a dynamic bureaucrat, but now he holds even bigger responsibility. His approach thus needs a change — from being a bureaucrat to that of being a leader. To live up to Modi’s expectations, Murmu will have to act tough.

Tackling corona pandemic seems like his first crucial assignment. One can only expect him to crack the whip on the erring officials to streamline administration because Kashmir is not normal region and coronavirus is not a joke.