The dangers of patriarchal narratives glorifying jauhar and sati

As Padmaavat, a tale like many others glorifying the oppressive ritual of "jauhar", hits the screens, let's take a look at the historical narratives around the issue of gender subjugation, running across the class and communal divide.

Although Padmavati wasn't a historical fact and a mere imagination of an artist, yet the narrative that was being utilised by the author of the story comments on the cultural and social circumstances that were prevalent in medieval India.

A more significant point of contention, instead of the present prevalent narrative and rhetoric of Rajput pride and its apparent soiling, must be the subtle upholding of the ideals of patriarchal social organisation expressed in the most gruesome form of human sacrifice - jauhar and sati. The ideals, which render divine the woman who "chooses" to burn herself for the pride of the husband and the community, need to be shattered with unsympathetic hammers of historical facts. In many forts in Rajasthan, handprints of women adorn the gateways. These handprints are of those women who were never to return to the fortresses and were to be remembered for their great sacrifice for getting burnt on funeral pyres. Today, these handprints don’t stand as testimonials of the glory of any individual or community, instead they stand as metaphors of the larger oppressive social organisation, furthered and sustained through forces both psychological and physical.

Even though Padmaavat is an imaginary and fictitious account it echoes many real life characters and stories of medieval Indian society. The choice of a mythical character instead of real historical figures by the moviemaker might reflect an attempt at teasing and flaring specific communal animosities, by creating binaries of the barbaric "other" in the Delhi sultan Alauddin Khilji and a righteous son of Indian soil in the Rajput King, with the forever victimised, sacrificing Indian woman in Padmavati lingering in the middle. 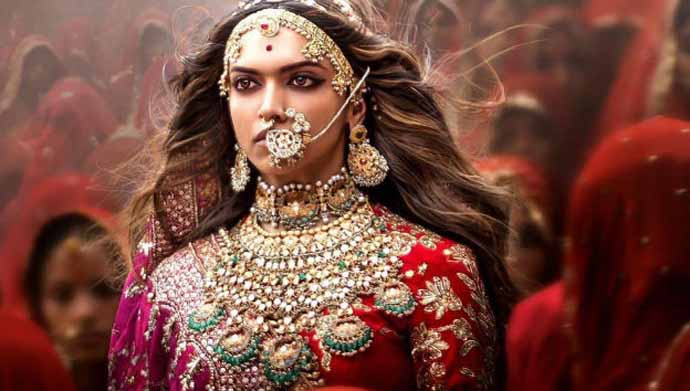 Deepika Padukone in a still from Padmaavat.

Historical accounts about women’s sacrifice, similar to "Padmavat", would put the past in better perspective. There are two historical examples similar to "Padmavat", that of Rani Durgavati from Gondwana and Rupmati from Malwa. In the account of a noble from Akbar’s time, Asaf Khan Khwaja, in Maasirul Umara, a biographical dictionary of later Mughal period, mention is made of the invasion of Gondwana by him. The country was ruled by Rani Durgavati. In the battle that followed this invasion, the queen was wounded and she requested her confidant to put an end to her life with a dagger since she had been conquered in battle and she didn’t want to "be conquered in name and fame". Thus, losing a battle wasn’t that great a matter of dishonour for a community, but a woman falling alive in the hands of an enemy was.

Similar to this incident is the story of the famous Rupmati, who was the love interest of the ruler of Malwa, Baz Bahadur.

In 1560-1561, Malwa was conquered by the Mughal forces, and Baz Bahadur before leaving for the battle "had left some trustworthy men with his women and dancing girls so that should news of his death arrive they [the men] put them [women] to death as is the custom of India". When the defending army was defeated and the news reached Rupmati, Shahnawaz Khan, the author of Maasir Ul Umara, writes, "fidelity grew ardent and she quaffed the cup of poison and manfully died for the love of Baz Bahadur".

In these historical accounts, the choice and agency of women in ending their lives becomes an important factor in looking at the institutions of sati and jauhar. But the nature of this agency needs to be put into perspective of social pressures. Historical accounts suggest that the burning of a wife after husband was regarded as a commendable act and from the details provided regarding the social exclusion and boycott levelled against the woman and her family who refused to commit sati, seems to hint upon the indirect force that was at work against women.

Apart from being acts of force and coercion, the institutions of jauhar and sati, also were of cross-communal nature. Not only the Hindu community, or a particular caste in the larger loosely organised community now known as Hindus, practised these rituals, but variations of these kinds of sacrifices were also imposed by other communities on their womenfolk.

Farid Bhakkari, an observer of Mughal social life, informs about Aqil Khan Kambu Karori, an important Mughal noble, who was stationed at Kara Manikpur and fell out of favour due to irregularities in wealth, and was imprisoned. He, in order to prevent his womenfolk from being captured by the agents of the court, got his entire harem massacred by his son-in-law. The protection of family, which included mostly the women of the harem, was the first thing that caught one's imagination in cases of adversity. 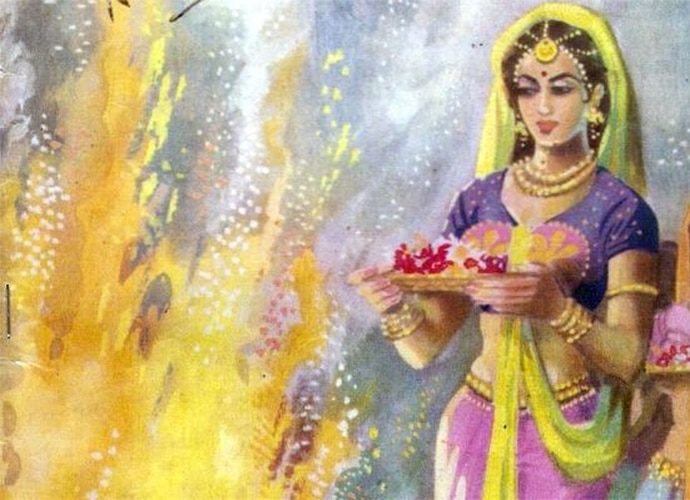 In the biographical account of Khan Jahan Lodi, Shaikh Farid mentions family and treasure in one vein as the objects to be protected on the starting of hostilities after his rebellion during Shah Jahan’s reign.

The cross-communal nature of these acts is also highlighted from the nature of the justifications provided for sati by medieval Indian authors. Although it has been reported that during the Mughal period there was a decline in the number of "satis" committed, yet the fact that Akbar saw it as an act of bravery early during his kingship, and Muslims actively assisted the execution of the act, forms an important comment on the pervasive nature of the practice.

Accounts have reported instances where a Hindu woman was seen riding towards the sati pyre along with the Brahmins and she was followed by both Muslims and infidels. This 14th century reference also suggests that the sultan was lenient in providing permission for sati to the gentiles. Thus, it becomes evident that the Hindus and Muslims alike murdered their dependents in cases of adversity.

The larger argument being made is that women’s bodies were not only spaces of sexual domination and legitimisation of the political power, they were also symbols of honour and morality of community structures and this served as a threat to their own life and freedom.

Protection of the chastity and integrity of the womenfolk figures as a major reason behind organising violence. Before going further with examples, one thing needs to be stated to understand the overall picture of social oppression at work on various levels. The class domination worked in close conjunction with gender supremacy and the large numbers that gave themselves up to fire included many invisible lower class gentiles, both male and female.

Absence of accounts from women’s perspectives leaves one sceptical of the authority of historical accounts composed and formulated by the privileged gender. The innumerable comments suggesting the choice and agency of the women in burning themselves seem ignorant and disconnected from the true nature of events.

To provide context, Ibn Battuta, a 14th century traveller to India, seems traumatised on witnessing a sati, he informs about his falling off the horse and losing his senses on looking at the gruesome act. Yet the same author gives a detailed justification of the institution by claiming the commendable act to not being compulsory and referring to a women’s bravery who weren’t frightened on seeing the fire.

Ovington, another observer of Medieval Indian customs, suggests the significance of child marriage as the main reason behind women happily committing themselves to fire on husband’s death. According to him, the love that grows from the time of infancy takes such a form that women would prefer death to life without the beloved. Thus, the contemporary writers of medieval period draw a rosy romantic picture of the burning of a woman in sati.

This romantic picture of an exotic land with meaningful customs is, however, not maintained by all the observers. Some in providing critical account of India give hints about the negative side of the oppressive rituals of sati and jauhar.

Francois Bernier, an important source on medieval Indian society and culture, gives a number of references to women being physically coerced into the fire by Brahmans. In the absence of women’s narratives, these indirect references to women’s unwillingness to be burnt adds an entire new perspective to the issue of choice and agency of the one committing sati or jauhar.

One of the accounts gives testimony of a heinous act of the Brahmans who pushed forward a girl into the fire when she had fallen back five or six paces from the pit of fire.

A similar account is also reported about a 12-year-old widow, who trembled and wept at the sight of the fire, but Brahmans, assisted by an elderly woman, tied her hands and feet, forced her into the burning pyre and made sure that she couldn’t escape.

Apart from these cases putting to question the issue of choice of women, there arises another intriguing scenario where gender and class interact to bring a more complex picture of the medieval world.

References in historical sources are made to women who were unwilling to get burnt in fire and to avoid that they threw themselves at the scavengers who were the sweepers who work around that area and assembled in large numbers to witness the execution.

In such cases, even when the women were rescued from the immediate death, they still didn’t have any positive prospect, because after the cowardly act of not getting burnt, they were disowned by their communities and received no respect because of the dishonour which they had brought upon their families.

Another point of interaction of gender and class is highlighted in the burning of the lower classes in sati. The larger number of persons committing sati, acted as an indicator of prestige of the dead and the dead’s legacy, in such a scenario the subjugation and silent sacrifice of the innumerable lower class gentiles was an unsaid truth.

To give an example, 60 people, male and female, performed sati along with the body of Raja Man Singh Shekhawat. Similarly, sati was performed along with the turban of Raja Ram Das Kachhwaha, where 15 women and 20 male servants sacrificed themselves by jumping into fire. Thus, the conjunction of the class and gender subjugation created a nexus which problematises the entire issue of looking at one of them without taking into account the other.

From Chaitanya to Amir Khusrau, there has always been an ethical responsibility of morality attributed to women. This has led to worst forms of oppressive practices to be conceived and executed. And jauhar and sati form important parts of those gruesome practices.

Thus, it can be said that when Shahnawaz Khan comments derogatorily about widows sacrificing themselves merely on account of the custom without being moved by love, it reflects on not only the unsaid narrative of the unwillingness of the one being sacrificed, but also on the pervasive nature of gender oppression that has been present in Indian society for a long time.