DailyOh! What will happen to JEE and NEET exams, to why govt invoked God over GST payments

Supreme Court says UGC can grant date extension, but states can’t go for cancellation even as Opposition unites on JEE and NEET issue.

You can’t pass if you didn’t get tested. If you didn’t pass, you can’t be promoted. Bottom line: You must get tested. Over 1,00,00,000 have been tested over the past 14 days for coronavirus but that is not the test the Supreme Court is talking about.

The Supreme Court has said final year students can’t be declared as ‘passed’ by states. What the states can do is ask the University Grants Commission (UGC) to grant an extension to hold exams. But exams must happen. In the case of JEE and NEET exams, the SC had refused even the extension because two extensions have already been granted. What if students and states want more? Give them mor, deny them more.

Anyway, you can also ask the SC to review its view on matters. Non-BJP states have reached the SC with a review petition. Congress leader Rahul Gandhi has meanwhile spoken to the government through a video asking the government to listen to all stakeholders and arrive at a consensus.

NEET-JEE aspirants’ safety should not compromised due to the failures of the Govt.Govt must listen to all stakeholders and arrive at a consensus.#SpeakUpForStudentSafety pic.twitter.com/Y1CwfMhtHf

Gandhi said student safety can’t be compromised. Members of Congress’s student wing National Students' Union of India anyway went ahead compromising their own safety by launching a public protest in Ahmedabad with masks covering the chin and social distancing thrown in the dustbin. NSUI members protesting against JEE and NEET exams being held on schedule in Ahmedabad. (Photo: ANI)

Ahmedabad: Members of National Students' Union of India (NSUI) detained by police during a protest against Centre's decision to conduct JEE & NEET examinations in September pic.twitter.com/51zpMb9EYy

Exams must be held but disbursal of states’ share of GST by the Centre can wait. Blame Covid? No, blame God. Finance Minister Nirmala Sitharaman, after a meeting of the decision-making body for fixing GST policies, said, “...This year we are facing an extraordinary situation. We are facing an act of God where we may even see a contraction.” States want their share because they haven’t earned much this year. Nor has the Centre. But GST payments were stalled even in pre-Covid India. The first delay happened in August-September 2019; since then a cascading impact on payouts has happened. The BJP government can actually thank God for Covid on which it can pin the blame now. But blaming ‘act of God’ may not go down too well with God who may call it an ‘act of China’.

From God, you can always seek forgiveness. You can seek it from humans too. Japan’s outgoing Prime Minister has sought forgiveness “from the bottom of my heart”. Given the size of the heart in human body, the bottom of the heart may not be too deep, but an apology coming from even that bottom is considered deep.

Why is Abe sorry? For not “being able to fulfill his duties”. What came between duty and Abe is his health, which is deteriorating. 65-year-old Abe is suffering from chronic colitis. Abe may not have been able to go as far as he wanted to in his Prime Ministership, but still he is by far the longest-serving Japanese PM with seven years and eight months in office. 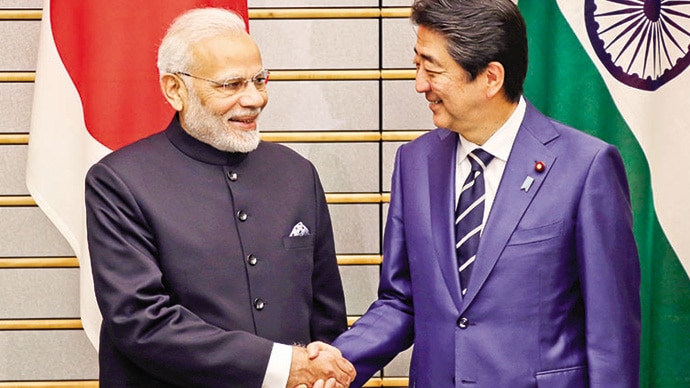 The apology that accompanies Abe’s resignation isn’t the only one he has offered in his tenure. He gave one to ‘comfort women’ too.

Abe once said ‘comfort women’ were not forced into the ‘job’. Abe's remark came long after 1993, when Japan’s Chief Cabinet Secretary Yōhei Kōno accepted that the Japanese Imperial Army forced women to work in military-run brothels during World War II and even before the war. That statement of acceptance was called the Kono Statement.

South Korea in recent years has been erecting statutes depicting ‘comfort women’ and a man resembling Abe bowing before them. With Abe finally bowing out, we wonder if the matter would rest in peace. A statue of a 'comfort woman' with a man resembling Shinzo Abe bowing before her. (Photo: Reuters)

Not at peace are those seeking justice for Sushant Singh Rajput. Also those seeking justice for Rhea Chakraborty, who is at the centre of this storm. Rhea has been accused of not just being the reason behind Sushant’s death but also maligning his image after his death. Do the dead care? There is no way of knowing unless we are dead. But we are alive so let’s try to know what we can know.

What has Rhea said to ‘malign’ Sushant? Rhea claimed Sushant took a medicine before boarding flights because he experienced claustrophobia in flights.

Sushant’s ex-girlfriend Ankita Lokhande posted a video asking if what is seen in the video is what claustrophobia is. The video shows Sushant apparently in the cockpit of a flight which he is flying himself.

Answer to Lokhande: No, this isn’t claustrophobia. But then, it isn’t a cockpit either. It is a flight simulator.

Is this #claustrophobia ? u always wanted to fly and u did it .????

What is claustrophobia then? One, it is the Word Of The Day.

Claustrophobia is an irrational or abnormal fear of being in an enclosed space. Perhaps that is why many feel more comfortable in trains (minus their toilets) than planes. Many ≠ all.

Claustrophobia, however, comes from Latin word claustrum, which means ‘a shut in place’ and Greek word phobos, meaning ‘fear’. Fear of closed spaces is claustrophobia. Fear of closed spaces must be overcome, but it is the fear of a closed mind that should compel us all to open our minds. Let’s begin with this case. People are innocent until proven guilty. People are guilty when their innocence can’t be proven.

Now, let’s go back to flying, which is what Sushant wanted to do one day. Rafale fighter jets would be inducted into the Indian Air Force (IAF) on September 10. The ceremony would be held after Defence Minister Rajnath Singh returns from the meeting of Defence Ministers of Shanghai Cooperation Organisation nations from September 4 to 6.

To join the ceremony, French Defence Minister Florence Parly would be requested to fly in from France.

Will the fighter jet fight China? We hope no fights happen but China it seems is itching for one. The country has started setting up 5G network near Demchok and fresh constructions at the Pangong Lake in the Ladakh region, even as talks are on to defuse the situation.

As the date for Rafale's date with IAF is set, Kangana Ranaut has a date for Tejas. The film in which Ranaut plays an IAF pilot goes on floors in December 2020. How high it flies or crash lands will be known when the film is out.

On that note, we will sign off for today.

Also Read: Are Indian Muslims victims of their 'victim mindset'?

#GST, #Shinzo Abe, #Rhea chakraborty, #Jeeneetexams
The views and opinions expressed in this article are those of the authors and do not necessarily reflect the official policy or position of DailyO.in or the India Today Group. The writers are solely responsible for any claims arising out of the contents of this article.