Believe it or not, "What's for lynch today" is a sordid joke doing the rounds on Indian social media.

It is a testament to the horribly violent times we're living in where swift mob justice, it seems, has replaced court trials for unprivileged Indians, where ordinary citizens turn savage at the slightest rumour.

From suspicions of cow salughter to beef consumption and now "child lifters", India has become synonymous with lynchland.

Jharkhand is the latest in the many lynch fields: a raging mob, acting on rumours about "child-lifting gangs", killed atleast seven people (in two separate incidents) and injured several others.

On May 18, four cattle traders, incidentally Muslim, were cornered and lynched by a mob in Rajnagar near Jamshedpur. The four were passing through Sobhapur village early in the morning when villagers stopped their SUV, dragged them out and tortured them for four hours before killing them. 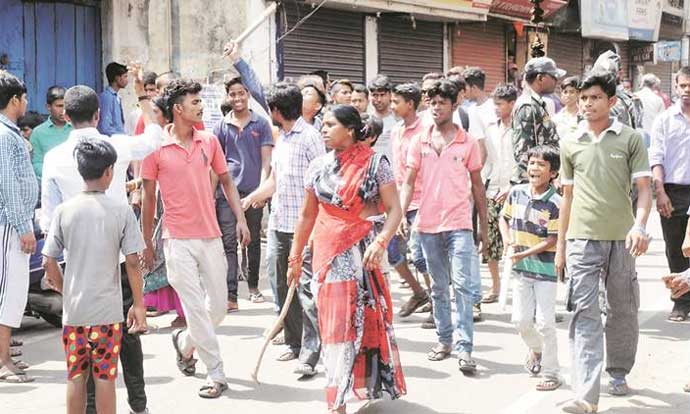 Locals protesting the lynchings in Jharkhand.

Although the police denied any communal motive, suspicions that the attack was indeed communally motivated led to protests and shutdowns in many of Jamshedpur's Muslim-dominated areas.

In the second incident reported fromin a tribal locality in Jharkhand's east Singbhum district, two brothers — Vikas and Gautam Verma — and their friend, Ganesh Gupta, were lynched by a mob who accused them of being "child lifters".

According to the police, in both cases, rumours were circulated via WhatsApp that the gangs of child kidnappers were taking away children and killing them.

“...Suspected child lifters are carrying sedatives, injections, spray, cotton and small towels. They speak Hindi, Bangla and Malyali. If you happen to see any stranger near your house immediately inform local police as he could be a member of the child lifting gang,” the message said, the Hindustan Times reported.

In pictures, videos and reports, it is clear that the victims pleaded innocence and asked the mob to spare them, but the frenzied group lynched them anyway.

How the horror played out (Video contains disturbing images):

India has witnessed a spate of medieval-style lynchings in the last two years: from Mohammad Akhlaq's murder in Dadri in 2015 to Pehlu Khan's lynching in Rajasthan last month; from the 2015 Dimapur lynching where a rape suspect was killed by a mob in Nagaland, to two men being lynched on suspicions of being "cattle theives" in Assam. Mob justice and murder as a public spectacle has become the norm for the underrepresented and socially-backward communities.

Shockingly, most of these incidents have been met with silence from the ruling establishment, further normalising the ghastly toll. Such public display of violence is also symbolic of the complete failure of the rule of law where it is most needed. Perhaps, the perpetrators have grown to believe the law will never catch up with them.

The ruling party at the Centre has also played its part, with most from the ruling government and the BJP choosing silence and sometimes even justifying such crimes. Furthermore, in many states like Maharashtra and Haryana, vigilante groups such as Gau Raksha Dal and others thrive on state support, lending space to the insidious culture.

Normalising such a mentality will only lead to more instances of public murders and "mob justice". It's time to ask, what "collective conscience" of the society is served with such public murders.