It was a big gamble that the Indian National Congress played with the seat in Vadgam, where Congress had won three consecutive terms, was to allow the 37-year-old independent candidate Jignesh Mevani – firebrand Dalit leader and a good orator – to contest unhindered against the BJP’s “fascist forces”. The result – a landslide win for the young Mevani by as many as 19,676 votes against the BJP’s Vijay Chakravarti.

While Jignesh Mevani has tweeted his gratitude- saying his is the politics of love and compassion which he aims to sweep over the politics of hate, by which he means the RSS-BJP combine - there’s also enormous intrigue about this frank and fiercely anti-Hindutva Dalit leader, who is challenging the upper caste-upper class Hindu hegemony of the BJP in its own bastion.

At more than 95,000 votes in his maiden election contest, Mevani has made a huge splash on the electoral firmament of a BJP-smitten India, giving the ally Indian National Congress a firm footing so as to tap into the staggering Dalit unrest spreading through the country for about a year now. Since the July 2016 episode of flogging Dalits in Gujarat’s Una, Mevani shot to fame for articulating the pent up anger among the Scheduled Castes and Scheduled Tribes in the western state, kick-starting an agitation that’s now the talk of the town. 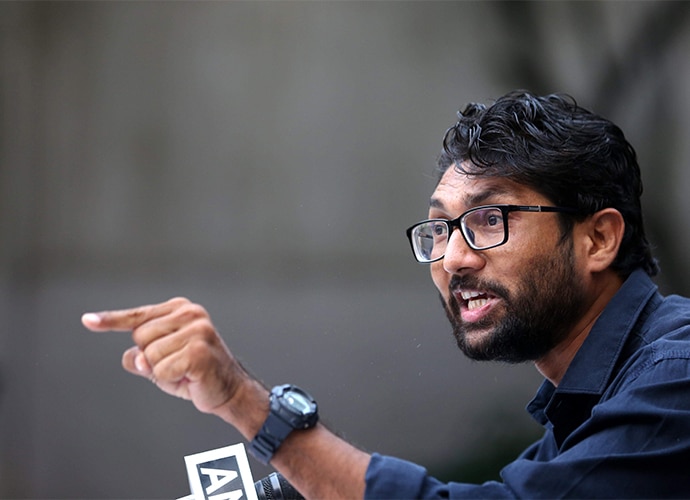 Only days back he called the BJP “fascist” in an interview, a point the Ambedkarite has been reiterating in as many interactions and speeches and rallies he has held, especially after joining hands with the other two youth leaders emerging from Gujarat - Hardik Patel and Alpesh Thakor. Mevani’s grounds-up movement is therefore a shot in the arm for Dalit politics in India at a time when the BJP is busy appropriating the legacy of BR Ambedkar.

Mevani’s points have been three-fold: the emphasis on the intersection of class and caste; the importance on agrarian and “rurban” distress bringing together lower castes, women, sanitation workers; and the solidarity with the religious minorities in Muslims and Christians of the state in an anti-majoritarian loose coalition of the downtrodden. Mevani is frankly articulating of his disgust towards what he calls “Brahminical hegemony” and understands that BJP’s attempts to erase caste under the “Hindu” banner is misleading.

Mevani has said: “The ultimate aim of any Dalit party or any Dalit rights group has to be the annihilation of caste, whether it is at the micro or macro level. Almost everywhere in the country, we see that most of the atrocities inflicted on Dalits are by the OBCs, who have been ‘Brahminised’. Also, the way in which the Indian state has carried out land reforms, the Sudras have become even more oppressive on Dalits. But without Dalits joining hands with democratic and secular forces, their cause cannot materialise.”

Mevani goes much farther than even the Congress' ideology of equal dignity for all to talk about historically-adjusted reparative justice. “Land reform is the most vital tool that can overhaul the structural change in society and give socio-economic empowerment to the marginalised. Caste is not just a sociocultural phenomenon, as it has a material foundation as well,” he said in an interview to a news magazine earlier this year.

Famously, on Modi’s idea of “Gujarati asmita”, Mevani has said that “one cannot preach self-respect on an empty stomach”, underlining the violence unleashed on Dalits and minorities by Hindutva cow vigilantes, as well as the narrative spin that the BJP tried giving to demonetisation and GST. It’s also important that Mevani sees himself as a pan-India leader unlike Hardik Patel and Alpesh Thakor, who will amplify the voice of the Dalits and the marginalised communities all over the country, thereby promising to be a tour de force for the anti-Hindutva coalition of 2019.

Mevani’s ability to see intersectionality among the politics of diverse but deprived groups such as OBCs, Dalits, Patels, traders, farmers, sanitation and health workers, women, teachers, among others is a gift that would keep giving when the Indian National Congress needs to frame its pro-people, pro-poor manifesto in not just the eight states going into elections next year, but also the General Elections of 2019. Along with Rahul Gandhi, who’s trying to provide a healing touch and a message of “love and affection” and dignity for every Indian, Mevani’s sharp insights into the fault lines and his frank articulation of the systemic abuses of power over decades would chisel the anti-Modi coalition of secular forces in the grand battle of 2019.

Given his chutzpah and socialist romantic lure, Mevani would be an important factor for Rahul Gandhi to help coalesce the Dalit and progressive youth vote for the electoral contests ahead. Given that almost 40 per cent of Indian voters will be under 35 in 2019, this would be a significant factor in consolidating a secular alternative to Modi-Shah-led BJP’s Hindutva juggernaut.