The university which made rich contributions to the country's freedom struggle has been an easy target for the right wing forces since long.

Aligarh Muslim University (AMU) is going through tumultuous times. The students are agitating peacefully in search for justice. They are up against powers that are hell-bent on denying the same. 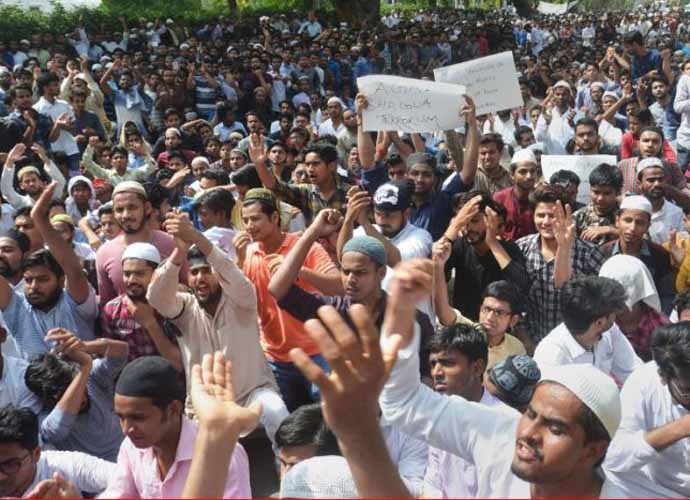 The whole episode of unrest started when a mob carrying pistols and knives in their hands, raising objectionable slogans and escorted by the persons in police uniform tried to enter the university to attack Hamid Ansari, former vice-president of India, who was on the campus for a function organised by the AMU Students' Union (AMUSU).

The university students jumped to Ansari's rescue and caught hold of a few troublemakers and handed them over to the police for further action. When the students came to know that the rabble-rousers have been released by the police without any action, they proceeded peacefully towards the police station to register their complaint against the miscreants.

Meanwhile, the police started a lathi-charge and fired tear gas shells at the students. The protesting students were beaten up badly. Many of the students were rushed to the university's medical college for treatment.

As news of the incident reached the public, the miscreants made fictitious claims and alleged that they barged into the campus to remove Mohammed Ali Jinnah's portrait which is hanging in AMUSU's hall since 1938 when Jinnah was conferred with lifelong membership of the union.

The hoodlums got emboldened after they received patronage from Satish Gautam, Lok Sabha MP from Aligarh, who is also a member of AMU court.

AMU has been an easy target for the right wing forces since long. Earlier too many right wingers led by the same Satish Gautam tried to disrupt AMU's peaceful atmosphere when he gratuitously introduced a controversy over the celebration of Mahendra Pratap Singh's birth anniversary on the campus in 2014.

Going back in history, it is pertinent to that AMU and Jamia Millia Islamia (JMI) are among the rarest institutions in the world whose students have played a major role in the country's independence struggle. Mahatma Gandhi himself went to Aligarh in 1920 to invite AMU (then MAO College) students to seek their active participation in the freedom movement. The students didn't disappoint Gandhi and played a vital role in the liberation movement. Hasrat Mohani, spread the message of the movement far and wide through his writings. Mohani tabled the resolution for complete independence in the 1920All India Congress Committee session held in Ahmedabad.

Raja Mahendra Pratap, another celebrated alumnus not only visited many countries to launch relentless struggle to oust the British from India but also floated the idea of setting up a government-in-exile in Afghanistan in 1915. Pratap was nominated as the first president of this government-in-exile, while Maulvi Barkatullah was appointed the prime minister. Another alumnus captain Abbas Ali joined Netaji Subhash Chandra Bose's Indian National Army in Malaysia in 1941 and devoted his life to the freedom struggle.

Shoeb Qureshi also played an important role in the freedom struggle and was actively involved in the Khilafat Movement for a long period.

He also edited Harijan when Gandhi was incarcerated. There is a long list of AMU alumni who played a crucial role in the freedom struggle. The list includes the likes of Chaudhry Khaliquzzaman, AM Khwaja, Abdul Ghaffar Khan, Abdul Matin Chowdhury, and many many more. Since the university's inception, AMU students have been taught to fight the evil forces and stand for truth and social justice across the world. In 1911, when Italy attacked Libyan city Tripoli, there was deep resentment in Aligarh. The students of MAO College donated funds for Tripoli.

Despite many challenges coming their way, the students are trying hard using every democratic means at their disposal to get those who tried to attack Ansari booked.

However, the way the state machinery has handled the situation has led to both anger and fear in the hearts of the students. Under the guise of attempts to establish peace, a concerted effort is seemingly being made to muzzle the voices crying for justice.

Freedom of speech is about resisting tyranny and oppression. The students are not only determined to stand up in peaceful resistance to this despotism, but also defy the underhand methods being used by those in power.

In joining the resistance of AMU students and crusade against injustice, I would cite a poem by a Tibetan poet, Bhuchung D Sonam:

#Jamia Millia Islamia, #Satish Gautam, #Mohammad Ali Jinnah, #AMU
The views and opinions expressed in this article are those of the authors and do not necessarily reflect the official policy or position of DailyO.in or the India Today Group. The writers are solely responsible for any claims arising out of the contents of this article.