Target JNU: How the sedition case is being used ahead of 2019's Lok Sabha polls

Three years down the line, there is still no solid evidence and instead, certain facts are being kept from the public sphere. With a high-stakes election nearing, will JNU students be collateral damage?

The controversy that erupted in Jawaharlal Nehru University (JNU) in February 2016 is full of zany coincidences. Charges of ‘sedition’ slapped against some JNU students by the Delhi Police are far from being proven, even three years after the incident. Earlier, the Patiala House Court had refused to accept the sedition charges levelled against former JNU Students Union (JNUSU) president Kanhaiya Kumar and others, including Umar Khalid and Anirban Bhattacharyya.

Interestingly, the students were released almost immediately after they were arrested in connection with the case because the judges did not find adequate evidence against them.

The Delhi Police failed to produce any of the 30-plus Kashmiris who were allegedly present on the campus on February 9, 2016, who reportedly raised slogans of, ‘Bharat Tere Tukde Honge, Inshallah, Inshallah’.

The slogans, it is alleged, were raised during an event to commemorate the hanging of Parliament attack convict Afzal Guru.

The police, however, failed to establish that any such slogans were raised on the campus.

Many Kashmiri students were kept in custody and questioned. Despite this, the police failed to establish any of the charges it made. In the recently filed chargesheet, seven Kashmiri students too have been charged with sedition. 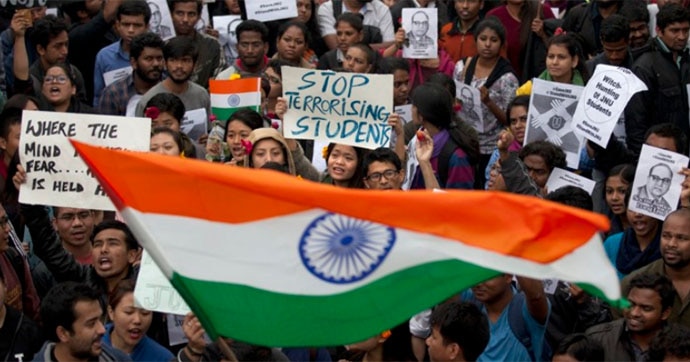 The Delhi Police have failed to present any evidence to support the charges of sedition against JNU students. (Source: AP)

The students have repeatedly been questioned by the Delhi Police since then and the harassment continues till date. The fact also that a lot of Kashmiri students were being questioned in the case was never put in the public domain.

The police needs to answer why the sedition charges have persisted despite the failure to establish any link between the students and the alleged act of sedition.

And if the police actually found a link, why did it not press the charges earlier?

Why did it wait for three years?

Surprisingly, 14 students whom the police have named as witnesses in the case have links to the Akhil Bharatiya Vidyarthi Parishad (ABVP).

The ABVP is the student wing of the Rashtriya Swayamsevak Sangh (RSS), which is the ideological arm of the BJP. To make ABVP students witnesses in a case against JNU students is thus tragic. Arora said the issue was “not a cold or a cough, but cancer” and needed to be “surgically operated”. Is Arora not being partisan in saying so?

It is unfortunate that the pro-Modi media is failing in its duty to report the other side of the story.

Ironically, the London-based The Economist has strongly defended JNU in a detailed article.

Shouldn’t Arora be defending her clients and not pillorying the institution?

Given that a tough election is staring the BJP, more ‘evidence’ against the JNU students is likely to emerge. Many old and forgotten cases are likely to be revived, perhaps with the connivance of some media.

It is time this agenda is called out.

Also read: We dissent: Sedition case against Kanhaiya Kumar, Umar Khalid and other JNU students shows India is not truly free yet

#Monika arora, #Sedition, #Kanhaiya Kumar, #Jnu sedition case
The views and opinions expressed in this article are those of the authors and do not necessarily reflect the official policy or position of DailyO.in or the India Today Group. The writers are solely responsible for any claims arising out of the contents of this article.