What happened in JNU before TV crew reached

Masked men and women launched an attack inside JNU on Sunday night. This tension had, however, been brewing since January 1.

"Such violence on university campus is completely against the ethos of this country," tweeted BJP member of Parliament and former cricketer Gautam Gambhir, referring to the attack by masked men, also women, in Jawaharlal Nehru University (JNU) that became breaking news late on Sunday evening.

The violence in JNU is akin to school and college clashes that in pre-liberalisation India, and little after liberalisation too, happened mostly at the cycle stands of institutions. Then students stopped riding to schools and colleges on cycles. They, however, kept clashing. 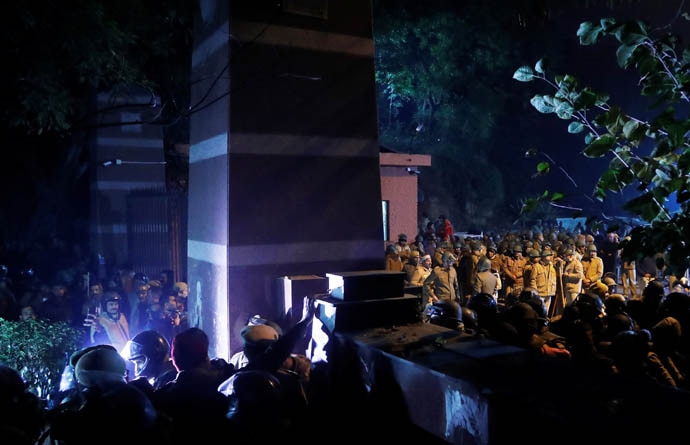 The JNU attack saw outsiders walk on the campus. Behind the masks were men and women.

Fights were often triggered in classrooms or school playgrounds or even libraries. Apply that to colleges too. The party, which got beaten up physically, found the hurt to the ego more painful than the physical bruises, even critical injuries.

That party would then return with 'rented' help from outside. This 'avenging' of hurt often happened right outside schools and colleges. Never inside.

"Tujhe dekh lunga" echoed more than "Hum Dekhenge" on campuses. "Dekh lunga" also implied that this 'settlement' of injuries and bruised egos was happening between boys in schools and men in colleges.

The JNU attack saw outsiders walk on the campus. Behind the masks were men and women. To that extent, Gambhir is bang on about the attacks being against Indian ethos.

To understand why this clash bears a striking resemblance to clashes seen between student groups in other institutions, we need to apprise ourselves with what was happening in JNU when the TV cameras had not reached the campus.

The answer can be found in the press statement of the Jawaharlal Nehru University Teachers' Federation (JNUTF). A section of JNU students was protesting against the hike in hostel fees.

Students and teachers were being beaten up and property was being damaged in JNU even before the said masked men entered the campus. These attackers too were masked.

The JNU registrar in a press statement on January 3, said, "At around 1 pm on 3rd January 2020, a group of students using masks on their faces forcibly entered the office of the centre for information system, switched off the power supply, forcibly evicted all technical staff and made the servers dysfunctional." 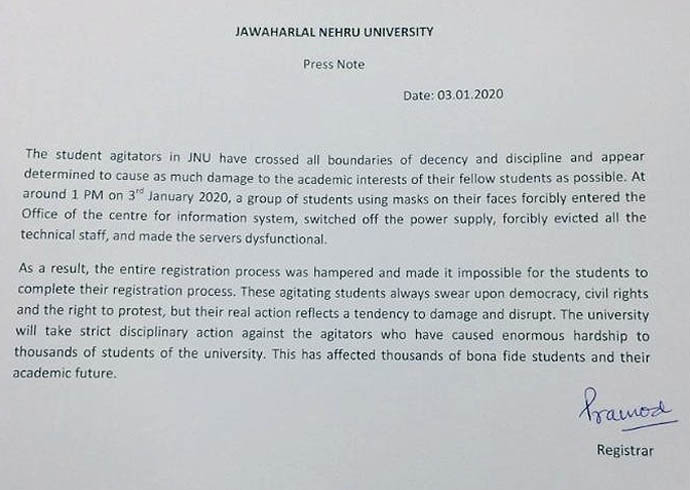 "As a result, the entire registration process was hampered and made it impossible for the students to complete their registration."

A research scholar from JNU was beaten up by Leftwingers because she took registration even after the boycott call given by the Left led JNUSU. pic.twitter.com/ES3xhsggxD

It is these students who then 'rented' support from outside and entered the JNU campus, beating up students and teachers who supported the boycott.

The Indian ethos that Gambhir talks about was also hit because as this group, now masked and armed with iron rods and sledgehammers, entered the campus, the police stood and watched.

When media and people gathered outside the campus to take stock of what was happening inside, amid slogans of Bharat Mata Ki Jai, a group of people began heckling media crew outside the campus. Swaraj Abhiyan founder Yogendra Yadav was dragged, pushed and nearly thrown on the ground by hooligans. Several other politicians were pushed and pulled. All this while, Delhi Police personnel were seen standing with their hands in their pockets.

So, while some outsiders were terrorising students inside JNU, a group stood outside to justify the 'cause'. To make matters worse, authorities turned off the street lights on the JNU road. Most of those involved in the sloganeering fumbled when asked who they were.

Some in between raised azadi slogans too, but their voices were shouted down under 'desh ke gaddaro ko, goli maaro saalo ko'.

A university clash turned into a national battle because the police administration clearly took sides.

Here is the mob wielding iron rods and lathis and sticks freely roaming the JNU campus. The main gate is blocked, media not being allowed inside either. This is a complete collapse. @ArvindKejriwal if the police won't step in you must pic.twitter.com/5ffbUzqzQa

Listen to the audio of what thugs say while colleague @ashu3page is surrounded and heckled while reporting from JNU gate: pic.twitter.com/yPQ0B1pHm6

Despite most of the incident caught on camera and the masked people remaining inside the campus for long enough, the police are yet to take their hands out of their pockets and make a single arrest in the case. But the police have always acted on "orders from above" and that has come to be the Indian ethos.

Let no one fool you into believing otherwise.

Despite repeated instances of violence, which by the university's own admission began on January 1, vice-chancellor Mamidala Jagadesh Kumar failed in ensuring order.

Kumar failed to even raise a voice for the students who were being beaten up for getting themselves registered for the new semester. He tweeted his photos taken during a lecture in IIT Delhi on December 31. The V-C then went into hibernation, only to speak up after TV cameras reached his campus.

There is a lot that happened in JNU before the cameras were switched on. Both the 'before' and 'after' stories are sordid tales of an administrative failure to stop clashes from turning into arson.

Post your comment
#M Jagadesh Kumar, #ABVP, #JNU protest, #Jnuviolence
The views and opinions expressed in this article are those of the authors and do not necessarily reflect the official policy or position of DailyO.in or the India Today Group. The writers are solely responsible for any claims arising out of the contents of this article.