What justice Chelameswar taught us about dissent

The judge stood unapologetically tall in the line of dissenters.

The tragedy of peaceful times is that the heroes rarely get their dues. It is only when the ruthlessness of the mob becomes too mainstream and the worst in us starts to raise its head that we realise how chivalrous our conscience keepers have been.

Justice Chelameswar, whom the Supreme Court of India saw for the last time on the May 18 on his last working day, stands unapologetically tall in the line of dissenters. One may disagree about the "unprecedented" press conference he and his other senior colleagues held at his house over the chaos within the administrative functioning of the court, but it is hard to deny the graciousness with which he continued to work despite his publically known anguish.

Justice Chelameswar has quite a few lessons to teach us about dissent. His conversation with Karan Thapar at the Constitution Club of India provides a useful template to talk about some of them.

While it was obvious that the press conference was prompted by what the judges felt were inappropriate decisions of the present chief justice Dipak Misra, Chelameswar in all forums kept reiterating that the trouble wasn’t with a particular individual’s way of using the powers but the lack of clarity in procedures of the system. For him, Justice Misra’s conduct was more of an opportunity to make larger institutional reforms.

While Karan Thapar insisted on specifying the blame on CJI for preferential allocation of cases to benches, justice Chelameswar made all efforts to avoid getting into the petty game. He would rather beg for what he thought were more urgent questions, if the “institution would be able to sustain the faith of the general public in this country’?”, if “this kind of allocation would be good for the institution?”

Even on the question of efforts by the Congress to impeach the CJI, he prefered to shift the attention towards rectifying the system, “I don’t know why we are obsessed about this impeachment business… There must be mechanisms to put the system in order. Impeachment can’t be the answer for every problem. We need to correct the system.”

There is a code of dignity he had embedded within himself. He made clear his criticism wasn’t aimed at to building him an activist’s career. What further made him more credible was his public announcement of not accepting any government appointment post-retirement. 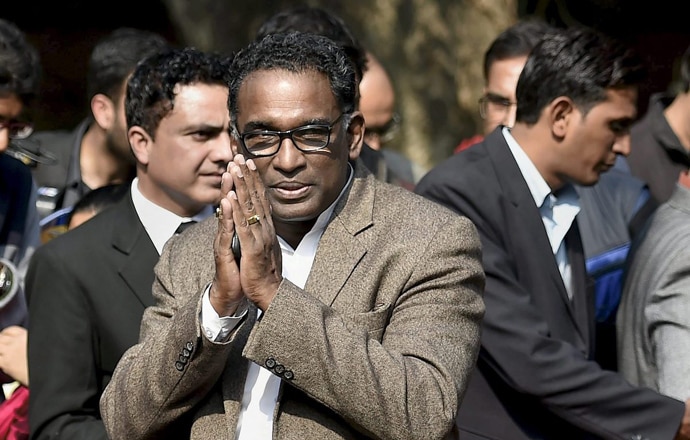 Anger is an illustration of faith, not the end of it

Protest is an act of tremendous faith. To get angry and ask for course correction or apology is such a powerful recognition of the other’s conscience and care. Chelameswar wasn’t being at a sarcastic distance in his criticism. He was a helpless family member. His disappointment was an illustration of his love in the justice system that he was partly himself responsible for. Though articulate of limitations of his power, he showed more than willingness to own up the mess.

Justice Chelameswar was the sole voice of dissent on the five-judge bench of SC in 2015 that struck down the National Judicial Appointment Commission (NJAC) Act 2014, an attempt to change the existing collegium system for appointment of judges.

Contrary to an instinctive belief that he would be against government participation in the collegium system due to understandable suspicions, he actually wrote a dissenting judgement saying, “To hold that it (the government) should be totally excluded from the process of appointing judges would be wholly illogical and inconsistent with the foundations of the theory of democracy and a doctrinal heresy.”

Here is an important lesson — justice Chelameswar’s disagreement at one place doesn’t characteristically define his allegiance somewhere else too. He isn’t morally shackled to not be against somebody only because he carries beliefs supportive of them in another unrelated matter. In order words, he is not fighting with the government everywhere, he isn’t against accountability and transparency. He is rational in his choice of dissent.

Dissent is no excuse for arrogance

On being asked if justice Ranjan Gogoi’s appointment as CJI would be impacted because of the letter, Chelameswar simply refused to speculate and assume. He humbly replies, “I am not an astrologer Mr Thapar. I hope it will not happen.”

Throughout his conversation, he makes no pretension to know what he doesn’t know. He finds it more comfortable to take refuge in the ambiguity of gestures and open interpretations than explicitly state opinions that would be jeopardising to his discharge of duties.

It is extremely dangerous in a democracy to trigger erosion of faith over the very body that is expected to decide how just things are. The social contract is as much maintained by the employment of logic in administering justice as is the faith on the righteousness of the person who does it. Once the credentials of that authority itself become questionable, any society will find itself in a state of deep chaos.

Getting negative coverage and credits for vocalising internal matters of an institution that is mostly expected to self-regulate itself, in the last months of service isn’t exactly a great idea. But justice Chelameswar taught us that desperate times demand desperate measures. That the lesser evil between risking anarchy and allowing unturth to maintain order is the former.

The binary of right or wrong is secondary, but the first act of love for the country at his personal peril should make Chelameswar a hero even for the nationalist right.

Also read: Why are human beings not allowed to die on their own terms?

#Collegium System, #Dipak Misra, #Supreme Court of India, #Justice Chelameswar
The views and opinions expressed in this article are those of the authors and do not necessarily reflect the official policy or position of DailyO.in or the India Today Group. The writers are solely responsible for any claims arising out of the contents of this article.

The author of Naked Emperor of Education, India’s first young critical commentary of the schooling system.