'I am a feminist': What Canada PM Justin Trudeau says about sexism and people commenting on his hair

I didn't go near discrimination, sexism, superficiality and judgment that women go through daily, he said.

A lot has been written about Justin Trudeau’s hair before and after he became the prime minister of Canada in 2015. But that is not even an “eyelash worth” of the sexism and objectification women have to face, Justin Trudeau said, while interacting with the students of IIM-Ahmedabad during his India tour. While his tour has been in news for the conspicuous absence of Indian ministers over Khalistan issues, he talked about nationalism, Donald Trump, India-Canada trade and the “objectification” that he encounters.

He declared himself as a feminist. “I spent many years wondering whether I can call myself a feminist as the word carries several connotations and loaded meanings... But at the very root of it, it’s really simple. If you think men and women are to be equal, and allowed to have the same opportunities, and if you recognise there is still a lot of work to get there, then guess what? You are also a feminist,” he said, adding that the society is underperforming as women are not allowed to contribute to their utmost potential.

And the hindrances are of two types, according to him. While sexism, gender discrimination are overt, the idea that women should invest more time in raising children is latent. He also described how his gender-balanced Cabinet is working towards a pay equity legislation and a compulsory parental leave to the second partner (so that women are not forced away from their workplaces). 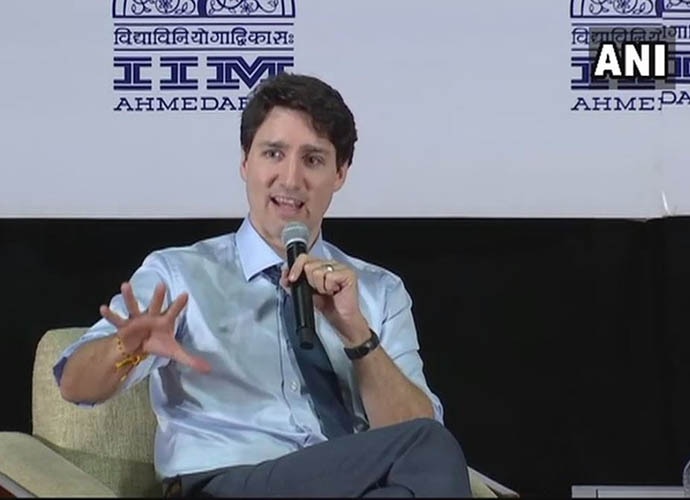 During the 2015 election campaign, the Conservative party ran an advertisement dismissing Justin Trudeau as a guy with “nice hair”, and who is “just not ready”. Admitting that he received comments like “too fashionable”, “someone who has nothing but nice hair”, he said that this is nothing compared to how a woman is targeted. “Any comment about how a man looks is not even an eyelash worth of the kind of the systematic discrimination women face every single day in any workforce,” he said. "As a man in business and politics I had lots of advantage. I didn't go near discrimination, sexism, superficiality and judgement that women go through daily," he said.

Gender will be a theme of this year’s G7 meet (Canada, France, Germany, Italy, Japan, US, US), apart from oceans, climate change, clean energy, economic growth. And it won’t be like “let’s discuss about gender issues”, he said, as gender will be a “horizontal” theme.

A few days ago, US ambassador to Canada said that US President Donald Trump and Canada PM Justin Trudeau have more is common than most people seem to realise. Echoing that same observation, Trudeau said that he is always regarded as a “liberal with openness”, in stark contrast to Donald Trump. “But both of us got elected in a very similar way... I made it a case that the middle class of Canada has not been made the beneficiary of the growth that the country made... 'Make America Great Again' is similar,” he said, hard selling his policies of “lowering taxes for the middle class”.

Citizens are not fools. Citizens can tell whether someone is genuine in their approach or just trying to live up to some lofty familial expectation: Canadian PM #JustinTrudeau at IIM Ahmedabad #Gujarat pic.twitter.com/5BgYWVFHsy

Distance is a challenge in Indo-Canada trade

India and Canada share trade deals of eight billion dollars yearly, which, according to Trudeau, is “not bad” given the challenge of distance. “We are certainly very interested in exploring trade scope with broad-venture countries including India,” he said. He considers the people-to-people connection to be the best trade and India, being the second highest source of foreign students in Canada, compensates the trade gap.

'Mahatma Gandhi is an inspiration'

On being asked about one Indian leader who is Trudeau’s inspiration, he named Mahatma Gandhi and his teaching that strength is not all about being aggressive.

On nationalism, he said India, like Canada, has always handled pluralism well. Heterogeneous societies are the future. “Understanding the differences among the groups should become a source of strength, not a source of weakness,” he said.

For him, nationalism is the idea societies are clinging to as they are scared of embracing the heterogeneity.

Also read: Can India and Canada use Justin Trudeau's visit to move beyond Khalistan